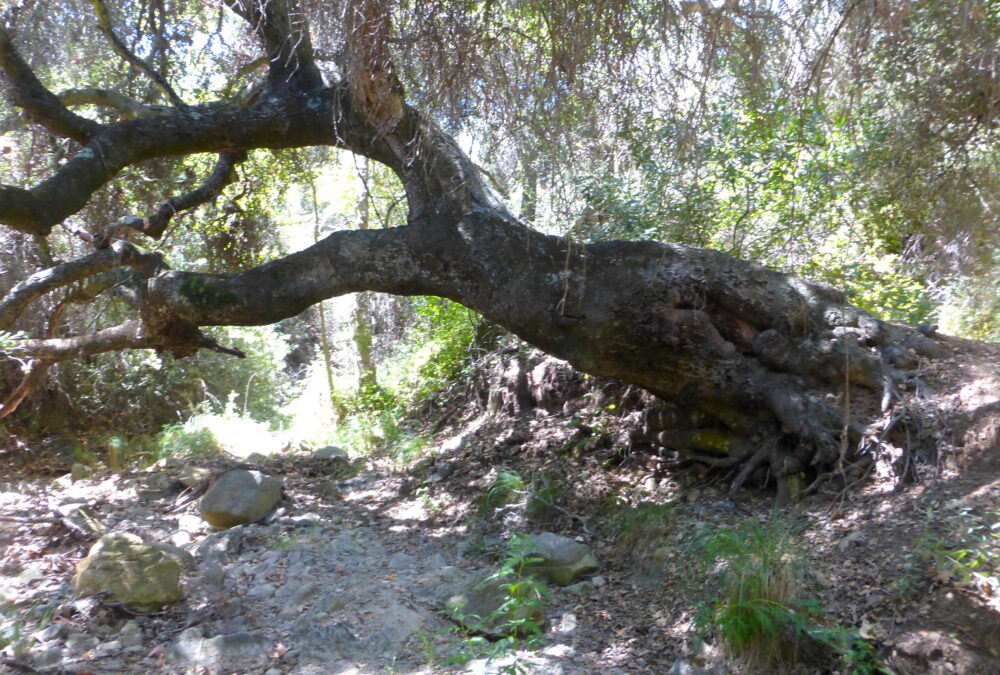 This massive oak continues to grow and thrive in a horizontal position. The tree’s powerful roots act as an organic cantilever, enabling the tree to remain anchored in the soil. All photos by Suzanne Guldimann
Topanga Life

Topanga’s oaks have deep roots, deeper than one might think. A coastal live oak tree can grow to be 80 feet tall and live for more than 500 years, but a lot of that life—and growth—takes place out of sight beneath the ground.

When an acorn sprouts it puts down a long taproot to anchor the growing sapling. That root can grow to be more than 40 feet long. Several additional deep main roots may also develop. Given time, these deep roots can punch through bedrock and hardpan, drawing up water from deep underground.

However, oaks depend on a much wider and shallower network of branch roots and surface roots to collect most of the water and essential nutrients the tree needs to live, and oaks have a partner that makes that possible: mycorrhizal fungi.

This is an obligate symbiotic relationship: the fungi needs the nutrients created by the tree’s leaf litter; the tree depends on the fungi to break down those nutrients and deliver them back to the tree’s roots, along with critically important moisture.

A 2005 U.S. Forestry Service study found that there are “probably more than a hundred mycorrhizal fungi associated with coast live oaks alone in southern California,” but there are two major groups.

Vesicular-Arbuscular Mycorrhiza occurs from around four inches below the soil surface all the way down to bedrock or hard pan, or as much as 20 feet in areas with deep soil. This fungi is microscopic but critically important.

Ectomycorrhiza is found in the oak leaf litter in the top four or five inches of soil under the tree. This is the zone that provides most of the resources for the tree. The fungi feeds on the carbohydrates in the fallen leaves and helps transform them back into nutrients the tree can use. This fungi is often visible in the form of pale root-like threads and nodules.

The network of mycorrhiza extends the tree’s root range and enables it to access moisture and nutrients that would not be available to roots alone. The beneficial fungi also produce chemicals that boost the host tree’s immune system and help protect it from diseases and from detrimental fungi like the kind that causes sudden oak death.

Studies show that the combination of oak roots and mycorrhizal fungi help stabilize soil more than roots could do on their own. This, combined with that deep taproot anchor and broad network of smaller roots, enables coast live oaks to thrive on steep hillsides and to grow at seemingly impossible angles.

Astonishing research published in 2016 revealed that the “wood-wide web” of soil fungi can help regulate soil moisture, carbon distribution and more over a wide area, benefitting the entire plant community, and also theorized that this web forms a way for trees to communicate on an elemental level and share resources. The paper, “Belowground carbon trade among tall trees in a temperate forest,” authored by researchers Tamir Klein, Rolf TW Siegwolf, Christian Körner and published in the journal Science, rocked the scientific community. Subsequent research continues to reveal the complex interconnectedness of plants and fungi.

The downside of depending on a fragile web of fungi is that any soil disturbance—discing, grading, even just driving through with a tractor or a truck—can disrupt that network, and provide an opportunity for non-native invasive plants to take over, introducing harmful bacteria into the soil and disrupting the network of fungi that regulate soil moisture.

Those of us who are lucky enough to live with oaks in our gardens can help protect them by making sure not to disturb the soil they depend on. Over-zealous raking or digging can potentially damage an oak without ever touching the actual tree. Trees with decks or patios built around them may no longer have access to new layers of leaf litter, and the kind of watering schedule needed for an emerald green lawn is not ideal for the sensitive, complex network of roots and fungi that enable our oaks to survive drought, but not necessarily overwatering.

An oak is more than just a single tree—it’s part of a living web of organisms, a home for numerous species of animals, a living, breathing life form that in many cases may have been here before we were, and if we are good stewards and take care of our arboreal neighbors, will still be here when we are gone, a big part of what makes Topanga so special.

A 2016 article in The Atlantic offers a fascinating overview of the “wood wide web”  and the researchers who initially discovered it: https://www.theatlantic.com/science/archive/2016/04/the-wood-wide-web/478224/

In 2017, contributor Bob Mendel wrote a piece for the Messenger Mountain News summarizing those findings: https://messengermountainnews.com/the-talking-trees/

Plant taxonomist Celeste Wilson, at Las Pilitas Native Plant Nursery in San Luis Obispo County, has written several articles about the role of mycorrhiza in native plant ecology, including this excellent article on the symbiotic relationship of fungi with oaks: https://www.laspilitas.com/classes/mycorrih.htm

The original 2016 paper on how mycorrhizal fungi help trees trade carbon can be found at https://science.sciencemag.org/content/352/6283/342.abstract