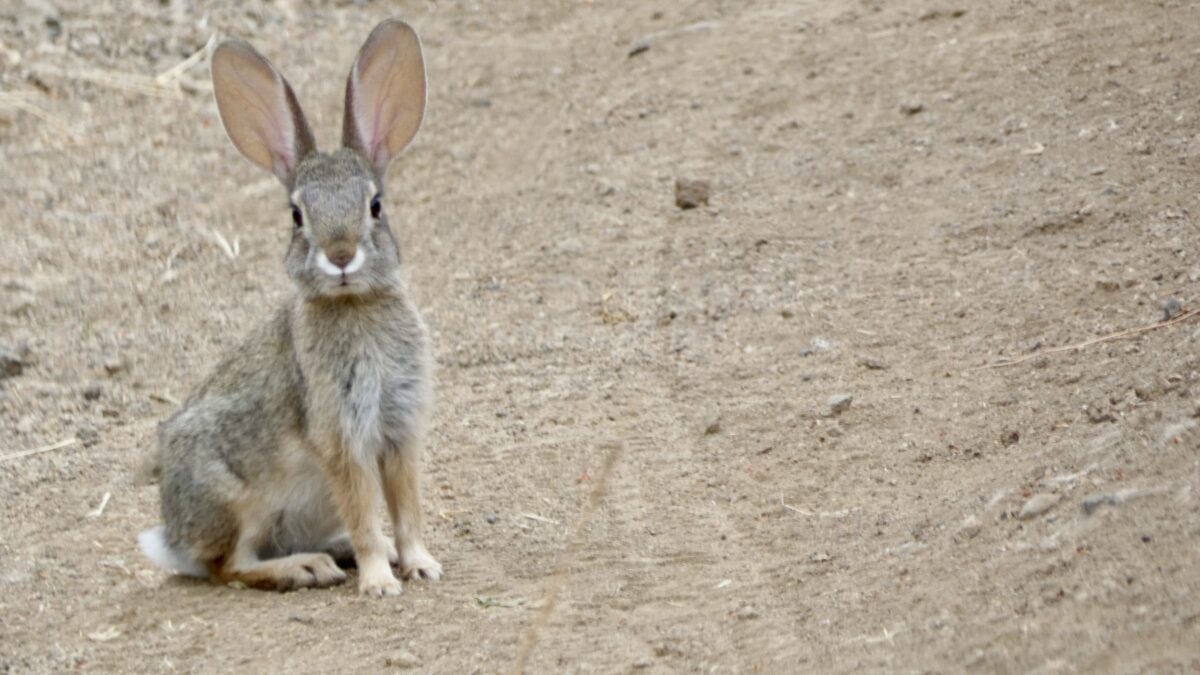 This rabbit is fearless in the presence of hikers on the trail, but those big ears are alert at all times for the slightest sound that may indicate a threat. All photos by Suzanne Guldimann
Discover

We are blessed to live alongside a wide variety of wildlife in the Santa Monica Mountains. The sight of a coyote or a bobcat, a raccoon or a skunk is a truly wild moment, but an encounter with one of the cottontail rabbits that live among us is perfectly ordinary—just a neighbor going about his or her business.

The most common rabbit in the Santa Monica Mountains is the desert cottontail, Sylvilagus audubonii. There are the rabbits one sees at dawn or dusk on the lawn, or nibbling the flowers in the pots on your patio when they think you don’t notice.

Desert cottontails have adapted to urban life and are found wherever there is enough food and shelter. This can be a problem, since the rabbit’s idea of dinner includes just about everything humans like to grow for food and many ornamental plants, but it also makes this rabbit one of the most familiar wildlife species, an animal that is easy to observe and to get to know as a neighbor.

Historically, there were black-eared jackrabbits in the Santa Monica Mountains but if they are still present they are not common. Jackrabbits are members of the hare family, larger and more solitary than brush rabbits or desert cottontails. They are still relatively abundant in the high desert—a recent rescue treated at the California Wildlife Center came all the way from Lancaster. The most current National Park Service Natural Resource Condition Assessment —conducted and published in 2013— still lists black-tailed jackrabbits in the Santa Monica Mountains National Recreation Area, but no one the author knows has seen one in our local mountains in years, and there are no reports on iNaturalist for this species in the area.

It’s a common misconception to think of rabbits as rodents. They aren’t. Rabbits and hares, together with pikas, belong to the order lagomorpha. Today, it’s a fairly exclusive club, with just 102 extant species, made up of 37 species of pika, 33 species of rabbit and cottontail, and 32 species of hare. The fossil record reveals a much larger and more diverse family, with 75 genera and more than 230 species.

Female rabbits are called does, males are bucks, and young rabbits are kits. Cottontail courtship involves a cross between tag and country dancing, with elaborate leaps and figure eight patterns. Occasionally, an importuned doe becomes annoyed and boxes the buck’s ears. Males sometimes fight with each other over females, and females can be territorial, especially when resources are limited, but on the whole, rabbit society is remarkably easy-going.

Desert cottontails lounge in the sun like contented house cats and nibble the flowers in the garden with evident enthusiasm. They don’t dig burrows or form colonies like many other rabbit species, but they seem to enjoy each other’s company and often congregate in small groups of three or four. The list of collective nouns for rabbits includes a “bevy”, a “flick” and a “drove”, (and if one was lucky enough to see more than one jackrabbit, that would be a “husk” of jackrabbits).

Does can be spotted this time of year gathering dried grass to line their nests, which might be located in an abandoned burrow created by a ground squirrel, the space under a shed, or a patch of deep brush. Kits are born blind and helpless. The only defense the mother rabbit has is a well-chosen nest site that is hard for predators to spot.

The mortality rate for young rabbits is extremely high and a doe usually has multiple litters throughout the year. Kits are fully mature at three months and may live to be two or three years old, if they are lucky. The average life span is around 15 months, although in captivity, individuals have reportedly lived to be seven or eight.

Rabbits are on the menu of every predator, from owls and snakes to the bobcat who specializes in hunting rabbits, and even the domestic cat, who will hunt rabbits for fun. Rabbits are also the frequent victims of rodent poison, and vehicle strikes—the zigzagging dash at speeds up to 20 mph they’ve evolved to evade hunters doesn’t help them to avoid cars. Every second may be their last, but despite their precarious existence, or perhaps because of it, rabbits give the impression of enjoying life to the fullest.

Desert cottontails have good climbing skills and have been known to climb up stairs, onto decks and picnic tables, and even into pots to gain access to tender, tasty flowers and vegetables. They can also fit through surprisingly small spaces. The best way to prevent misunderstandings is to fully fence anything that is off limits with chicken wire or hardware cloth.

Although they are prolific and adaptable, rabbits are also fragile and can die from shock or fear. This is a challenging species to rescue or rehabilitate. Preventing conflict is the best option. We can help wild rabbits by letting them live their lives without human interference. Keeping cats indoors and making sure dogs aren’t out after dusk or before sunrise—the times when rabbits are most active, can help prevent fatalities. Discontinuing the use of rodenticides and slowing down on the road helps not just rabbits but many species of wildlife.

The key to co-existing with rabbits is protecting the entire food chain, including the predators that keep rabbit populations in check. We are all connected with each other in this neighborhood—prey and predator, wild and human neighbors. That one small rabbit on the lawn at dusk is part of something big.

Museums, Zoos and Aquariums are reopening in Los Angeles County