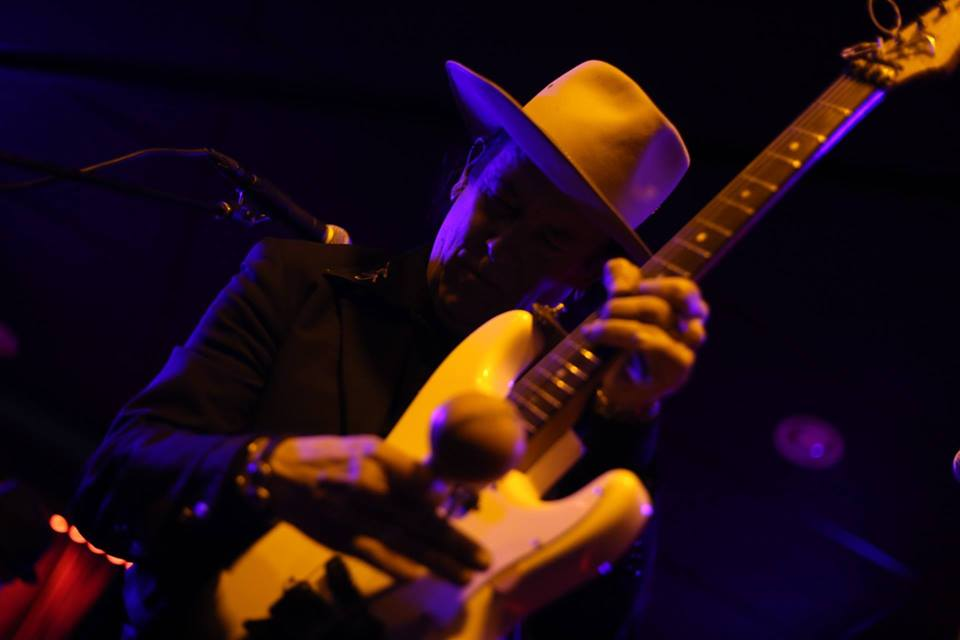 Preston Smith‘s latest release ‘Blue Skies For A Rainy Day’ was produced and released on his own label. He recorded live with his band but mostly played all the instruments himself. Photo courtesy of Preston Smith
ArtBeat

When Preston Smith was just shy of 13, he started playing drums in bands and set on a path towards songwriting by way of poetry. He likens himself to a sponge, surrounding himself with musicians, all older than him, wanting to learn everything he could from them. He particularly looked forward to their smoke breaks, when the other musicians would step outside; it was his opportune moment to try their guitars and instruments. “I liked hanging out with the older guys because they could afford the instruments that I couldn’t,” he says.

Preston was born in Houston, Texas, the youngest in his family. Music was always on in the house, the radio top hits always playing. The first song he wrote was a tune he named, “Sweet Belinda”. Fast forward to 1988, and Preston and his band are guests playing on The Tonight Show, featuring a song he wrote, ‘Oh I Love You So’ which landed on the soundtrack for Tom Cruise’s film, Cocktail. It was the biggest selling record of that year.

Preston has collaborated with and shared the stage with some of the most prolific songwriters and musicians of our time; Robert Cray, Salt-N-Pepa, James Brown. Johnny Cash’s daughter had a hit song he wrote called ‘Black and White’. He’s played a medley of shows, everything from Barbara Streisand’s wedding to George Clooney’s wrap parties. This year was different. COVID-19 drastically affected the lives of people all across the globe but musicians in particular saw a complete standstill of their livelihoods.

“It limited where I could play and how,” Preston says. “I did a Zoom here and there but I find it much easier to talk to you right now than to talk on my phone or computer screen. It sort of felt like we were all stumbling around in our houses, trying to figure out this or that. Tapping the screen, is this thing on?”

In music, particularly the blues, improvisation is imperative and this past year, so many have had to do just that—improvise and pivot to the next note. “My latest joke is when the going gets rough, the tough get going.” Before the pandemic began Preston wrote a song called ‘Time Changes Everything’ and in hindsight some of the lyrics were somewhat prophetic.

“There’s a line that goes ‘I look around and all I see / nothing is as it used to be. I had time on my hands / now I’m just trying to understand’”

Preston admits it was a challenge to go from being a performer to having to wear many hats as a cameraman, director, lighting, essentially without a crew or band. “Going into that Zoom format from being a live performer, if you don’t have all the tools, the microphone, that app…it’s a challenge.” One of the pandemic’s biggest challenges—a bold reintroduction of fear into society, in an unprecedented way. “We are now so concerned about a safe environment. Every profession has had to layer on another level of safety. I saw an ad where a plumber had a hazmat suit on.” He hopes that people can start to shift away from the fear, and lean into the healing of live music.

“My new song is called ‘My Dream Is You’, I wrote it fast just before I fell asleep,” he says. “It’s almost like a lullaby.”

Preston divulges he keeps notebooks absolutely everywhere and in the pocket of his shirt had three pens handy. “I try to write as fast as I can think. I write so much, so fast, I run out of ink.” He even speaks in melody, his mighty gel ink pen, his most trusted companion. Preston writes in pen, then types it all out to see it come together. “Once I see it in print I can see more of the writing sequence. Usually I’ll move a song in two, three, four keys before I settle on a key, emotionally and sonically.”

Preston is on a new stride in his songwriting, “I say that I used to write in black and white but now I feel I’m writing in color.” He’s written songs on harmonica, some on piano, and on drums, but mostly guitar. Since he first picked up an instrument he has learned over 600 songs. He draws inspiration from the writing styles of Bob Dylan and Cole Porter, admits he finds it fun to keep challenging himself. He also offers songwriting seminars.

“When I find out people want to start writing songs right away, I tell them, ‘Learn 50 or 100 songs you didn’t write or else you won’t understand the language, or you won’t have the tools,’” he says. “I think it’s important up and coming songwriters take the time to learn about the history of songwriting. You can work on a song for ten years or ten minutes to get a good song. Sometimes it does take 10 years to write a good song. I wrote a song many years ago and after my mom passed away, the first thing I did was revisit it and totally rewrite it as a tribute to my mother. The music didn’t change but the lyrics became more personal.”

While Preston is meditating on the lines to a song, he’s got a second in the forefront of his mind, a third and fourth simultaneously somewhere in his subconscious. Currently he’s working on new music, and has a piece motivated by the wind. “Something about wind feels spiritual to me because it represents immediate change. The wind is always going to change something whether it’s in the blowing of the leaves or blowing people’s hats off—whatever it does it’s changing things.” Change is near and until his next live show at a venue, you can revel in watching Preston Smith play some tunes outdoors at La Chingona Tacos stand on Sunday’s.