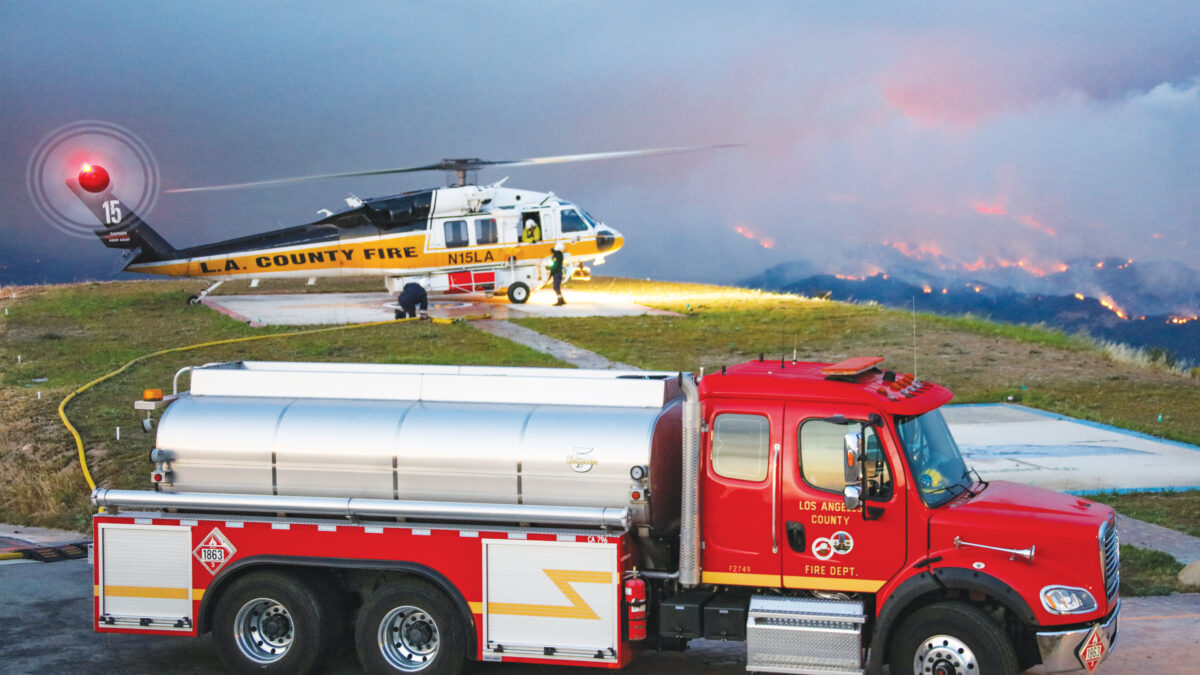 Dramatic dusk view of the 69 Bravo helistop with a Los Angeles County helicopter on the helipad and one of the four LAFD water tenders assigned to the incident, while the Palisades fire rages in the background. Photo by Greg Doyle
Feature, NewsBeat

Fire on the Mountain

It’s only May, but Topanga has already experienced its most serious wildfire since 1993. Fire has transformed a large swath of Topanga State Park, including the Hub and Eagle Rock, into a lunar landscape of ash and dust. When the Topanga New Times went to press, the fire was 32 percent contained and had burned an estimated 1,158 acres. No human lives or structures had been lost, and the Los Angeles Fire Department was optimistic that they could hold the line and prevent further spread. The Topanga evacuation orders had been lifted, but the evacuation warning for the Palisades side of the fire remained in place where the fire was still active in the Trailer and Quarry canyon area.

The Palisades Fire was named for its ignition point near the Trailer Canyon trailhead at the intersection of Palisades Court and Michael Lane in the Palisades Highlands. The official incident map indicates that almost the entire blaze was contained within the boundaries of Topanga State Park.

The fire was first reported around 10 a.m. on Friday, May 14.The initial reports stated the incident was 15 acres, centered in Quarry Canyon. For most of the day on May 15 the fire wasn’t regarded as a threat, although persistent smoke was an indicator that the blaze was still active. Then the blaze exploded from 15 acres to 750 in just an hour, despite the grey May weather, leaving fire crews grappling with a conflagration that now threatened more than 700 homes and structures.

The steep terrain and dense chaparral made it difficult for firefighters to tackle the fire on the ground. Evacuation orders were issued for Topanga Zones 4 and 6, impacting an estimated 1000 Topanga residents.

By the afternoon of May 16, the fire had grown to more than 1000 acres, and was threatening homes on the Palisades side of Topanga State Park, not far from the ignition point, as well as the Sylvia Park and Entrada neighborhoods on the Topanga side of the ridge.

The entire Topanga community spent a sleepless weekend. The flames were visible on the ridge above the canyon, and ash fell like snow, but fire crews held the line at the Topanga Fire Road/Backbone Trail, and the blaze did not spread into the canyon. By the end of the day on May 17, the evacuees were cleared to return home.

Air support made the difference. The marine layer that should have slowed the spread of the fire initially caused some problems for the fixed wing air tankers, which can only fly when the cloud cover is at least 4000 feet, but the big aircraft were back in action on the afternoon of May 17, and the firefighting helicopters worked day and night for the duration of the incident.

The fire response on the ground was hampered at times by “disaster tourists,” thrill seekers reportedly flocking to Topanga State Park for that perfect Instagramable image of L.A burning. The influx led to repeated law enforcement requests for people to stay out of the area. Fire crews widened fire roads and cleared the way for bulldozer crews to cut fire breaks, working in dense brush and in steep, rocky terrain.

Evacuation orders were lifted for the Topanga area at 6 p.m. on May 17. Topanga Canyon is currently open to residents with ID, and everyone is asked to be patient. Hand crews will be out in force working to strengthen the containment line for the fire. Road closures will continue until containment is completely achieved.

Closing Topanga State Park is challenging because of the many trails leading into it, but expect the park to remain officially off limits while damage is assessed and hazards like burned trees and damaged infrastructure are mitigated. The actual work of fully extinguishing hot spots will also take time.

Ramon Santos Rodriguez, 48, the man suspected of starting the fire, was apprehended on Sunday, and booked on suspicion of arson. The Los Angeles Police Department announced that Rodriguez had been treated for smoke inhalation and was being held on $75,000 bail. An earlier person of interest was questioned and released. During a May 17 press briefing, it was revealed that detectives are confident that they have the right individual in custody.

So far, there are no reports of serious injuries on the fire line, although one firefighter was treated for an eye injury.

A fire at this time of year puts extra pressure on wildlife because plant recovery will be delayed until winter. Topanga residents may see an increase in deer and other animals seeking food and shelter outside the burn zone. The long interval between fires in this area means plant and animal communities have a better chance of recovery than they do in areas that have burned repeatedly, and the burn zone may help safeguard the area during what promises to be a dangerous fire season, but the short term prospect for wildlife is bleak.

There are parallels between this year and 2013, another dry year, when the Springs Fire broke out on May 2 at the western end of the Santa Monica Mountains and burned 14,000+ acres. Our mountains were spared additional fires that year, but statewide there were record losses, including the massive Rim fire in Northern California, which burned from August to October and covered more than 400 square miles.

Parts of the burn zone on the Palisades side of Topanga State Park appear not to have burned since the 1961 Santa Ynez fire. On the Topanga side of the mountain there’s a section that may not have burned since the devastating 1938 Topanga Fire, which raced through the canyon to the sea in hours. Both of those fires occurred in November. If this fire had also ignited during Santa Ana conditions the outcome could have been much worse.

The scars of the fire will be with us until we have rain again, a reminder of how close we came to disaster, a reminder that it could have been worse, and it wasn’t. Not this time.

Buddha on the Boulevard