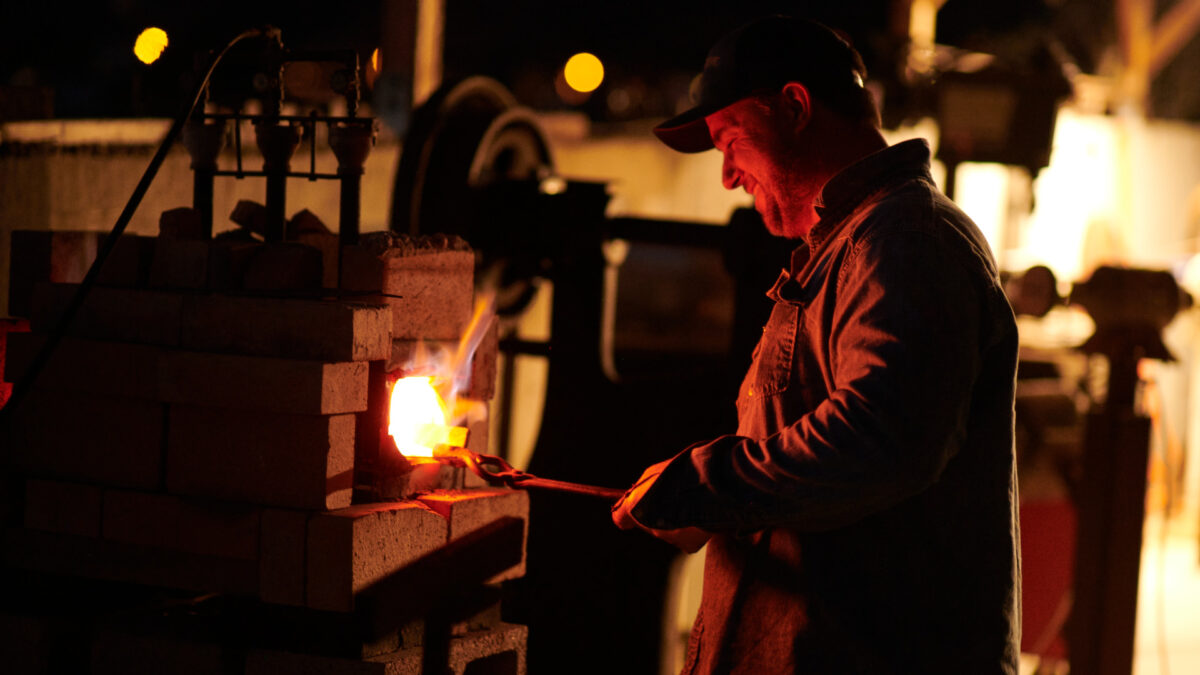 Dane Skophammer, founder of Iron Sand Malibu, was born and raised in Malibu and prior to forging a career as a bladesmith, was the executive chef at Malibu Farm. Maintaining an arduous schedule of 10-12 hour days, left little time for family.

“We had our first baby four years ago,” Dane shares. “When she was born I spent the first three months of her life gone—I was helping open a restaurant in Lanai, I traveled back and forth to Miami. It was a lot of travel. It’s what I signed up for but unfortunately it wasn’t conducive to having a family at the same time.”

Dane’s uncle was a blacksmith in Paso Robles, “I grew up around people banging on hot steel, got into making knives through him and used them every day,” he says.

Dane’s first handmade knives were made by his uncle. When Dane became interested in smithing he also drew inspiration from bladesmith Bob Kramer. “A lot of modern bladesmiths are going to take their roots from Bob Kramer, who is the man when it comes to contemporary culinary American knives.”

Bob Kramer was a chef, an artist, and ultimately saw the impermanence in the art he was creating in his food, so he set on to create something that would last. “Food is really great, but it’s kind of like art at Burning Man—you create and then it’s all gone,” Dane explains. “A knife is here to stay, that’s something that really appealed to me.”

For Dane, it was the intimate relationship revealed to him between a set of hands and the knives belonging to them. “Every day you are taking care of them, using them, they’re cutting you, but in the end you’ve got this really familiar connection to your knives. Your tool kit as a chef is super important and honing it down is a process. I realize now I was almost more interested in the tools than the cooking. Bob Kramer’s work let me know that this was something real that I could do.”

Making time for volunteering is incredibly important to Dane. When he isn’t hammering steel he is working with other Malibu citizens on the Parks and Recreation Commission for the city of Malibu. Prior to that, he served on the Malibu Safety Commission. One of the issues they are working on is homelessness in Malibu’s local parks.

“Right now we have a problem in Malibu with people camping in the parks. We’re trying to figure out a way to handle that, which is sort of a cross over of my former role on the safety commission and this new role in Parks and Recs. Parks are spending about $10-15,000 a year to remove stuff from the parks and Malibu Public Safety is spending more all around Malibu.”

“I didn’t know what to think at first but I have two little girls and it’s important to me that they have safe parks and recreation for them growing up here. I had that growing up. We got lucky. We weren’t even a city most of my youth and we had a lot of proactive citizens, picked up the ball and did the work.” If it wasn’t for citizen advocacy, Dane wouldn’t have had access to the basketball league and football programs. He says that made a big difference in his life, and with the stewardship of those mentors, he went on to play football at UCLA.

“It’s easy, especially with the internet, to let everyone know what you think but it’s a lot harder to sit down every Tuesday with the people who will guide the policies.”

Dane is also a part of the Point Dume Fire Brigade, which started as a Go Fund Me following the Woolsey Fire, when locals took it upon themselves to address concerns surrounding the disaster. “Whether or not there was enough support or not, bottom line, nobody here felt it,” he says. “You look back, the fire was so big, there was no chance to stop it. I would still advocate for a different response to fires like that, I went to all the after action reports and read thousands of pages of documents. There are a thousand homes right here. If the people who stayed at Paradise Cove hadn’t stayed, we probably would have lost around 300 more homes.”

Dane addressed the fact that everyone should heed fire warnings but explains that the Fire Brigade hopes to educate, advocate, and give people the know-how in hardening their homes. “There’s 40 guys with pumps that are well supplied, know what they’re doing, plus we know the homes. I sell the fire pumps for people to put in their pools. We could do a lot more as a group, and we are hoping to accomplish more.” Dane explained that members of the group are working to get federal recognition for the fire brigade.

Dane’s family is at the heart of everything he does. He changed careers so he could be with them, and volunteers his time to make the community safer and better for them. His girls have a little station in their dad’s workshop with drawings and little pots with sprouts.

“As a dad, my main focus is to not be lazy, keep going, keep cooking, keep playing. I didn’t want to see my girls buckled down in front of the screen. It’s tough when you’re running a business having kids, home is a business, mom is near but busy. It’s important to get our kids out of the house. Kids are happier when they’re out with their parents and their parents are joining them in play.”

Why is it So Hard To Adopt a Diet That is Good for Us and for the Planet?