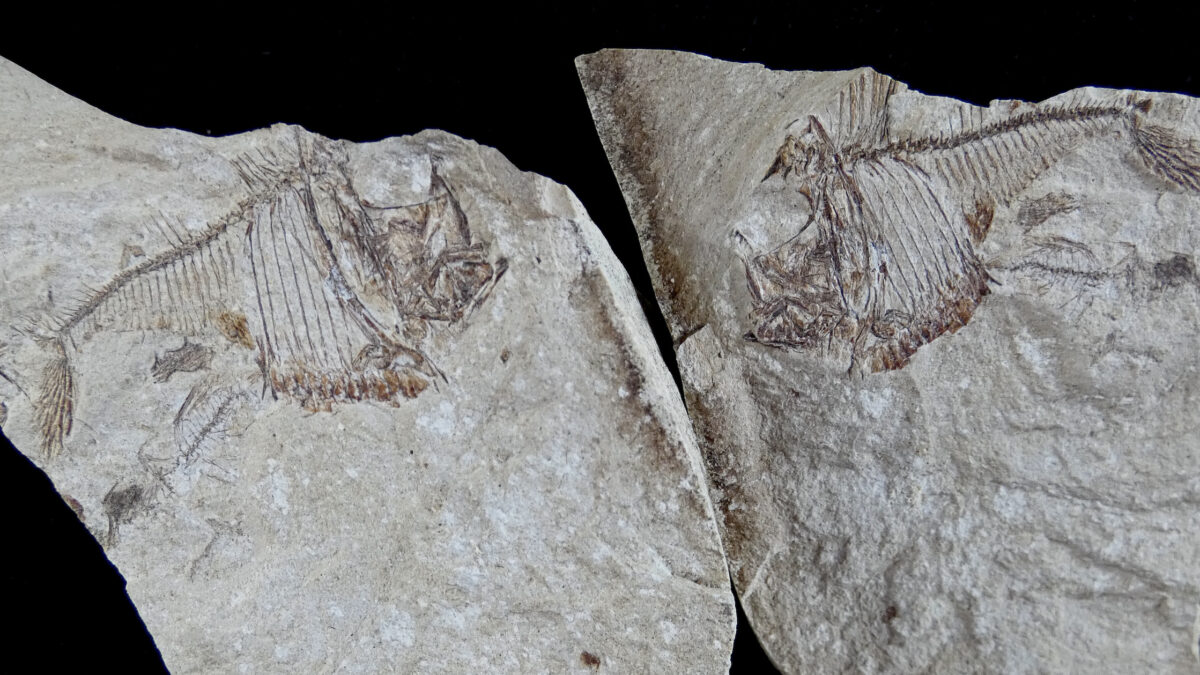 The author found this fossil in her garden. She tossed a rock out of the way while weeding. It split in two, revealing mirror images of a small fish. Fossils really are everywhere in the Santa Monica Mountains. . Photo by Suzanne Guldimann
Discover

The shark tooth was so shiny, so perfectly triangular and sharp, that it looked at first glance like a shard of metal on the sand. Our coast is home to a wide variety of sharks: leopard sharks that swim close to shore in search of sand crabs; bull sharks that lay their eggs in “mermaid’s purses” among the kelp; and great whites—the biggest local species. All of these sharks grow, shed, and regrow their teeth many times throughout their lives, but a closer look revealed that this wasn’t a recent tooth, it was ancient, and that was unusual. How did it end up on the beach? The most likely answer is that it eroded out of the sea cliffs or traveled down a creek to wash back into a very different sea than the one where the original owner of this tooth lived.

Beachfront property may be the exclusive domain of the über rich these days, but all through the Santa Monica Mountains our homes, our roads, our lives are built on top of an ancient ocean. There are sea shells, entire schools of fish, and even whale bones under our feet.

The Santa Monica Mountains National Recreation Area contains one of the most extensive and diverse assemblages of fossil material in a National Park. According to a 2004 resource report, “there are at least 2,300 known fossil localities, representing over a dozen fossiliferous geologic formations. Invertebrate, vertebrate, paleobotanical, protista, and trace fossils occur, ranging in age from the Late Jurassic to Pleistocene.”

The best known fossil-bearing layer is the Topanga formation, named for the community that sits atop some of the most fossil-rich rock anywhere. The Topanga formation ranges from pale ochre to orange in color. This rock is one of the defining characteristics of many parts of Topanga but it is also one of the most common types of rock throughout the Santa Monica Mountains and can be found as far away as the Simi Hills.

In a 2017 talk at the Mountain Mermaid, California State University Northridge geology professor and Topanga Canyon resident Vicki Pedrone described the formation as, “the kind of beach where waves disturb the sand. Sandstone was formed where it settled.”

This shallow bay was filled with marine life that was preserved in layers of silt and sand, and then uplifted to the top of the young Santa Monica Mountain range. The Topanga formation is around 20 million years old; the mountains are only around 4 million. While the Topanga Formation is crammed with fossils, from gastropods to an astonishing range of fish and the occasional sea lion or whale, it’s not the only fossil-bearing formation in the area.

Interspersed among the Topanga Formation is rock from the Sespe Formation. It’s older, more resistant to erosion, and often forms dramatic peaks and outcroppings, like Eagle Rock in Topanga State Park, and the red rocks of Red Rock Canyon. This rock is formed from sediments deposited by ancient rivers. It contains the fossils of plants and land animals, including mammals. The Tuna Formation—rocks that date all the way to the Cretaceous—more than 66 million years ago—contains mostly mollusks and microfossils, but it once yielded an epic ammonite (Eupachydiscus lamberti)—two feet across, now part of the collection at the Natural History Museum of Los Angeles County. Even the Conejo volcanics, which punctuate the mountains with volcanic intrusions that weather more slowly than the surrounding sediments, can yield fossils, including 15-million-year-old petrified wood.

There is some late Jurassic rock in eastern Topanga and Mandeville Canyon, but even though it dates to the time of the dinosaurs there aren’t any dinosaur bones there. This rock was formed deep under the ocean and the fossils found in it are mostly small invertebrates.

The shark’s tooth on the beach? It probably weathered out of cliffs made of soft rock from the Modelo Formation, late Miocene sedimentary rock that preserves a wide variety of fossils, from shark’s teeth and whale bones, to ice age horses and many species of terrestrial plant.

Fossils and all paleontological resources in the Santa Monica Mountains National Recreation Area, including state parks and county beaches, are protected. Removing fossils is illegal, but the protections are relatively new and only extend to parkland. It’s not illegal to collect fossils on private land provided the collector has the property owner’s permission, but even there, the current wisdom is that removing a fossil from its geographic context is like burning a book, an original manuscript that can’t be replaced.

Hobby collectors have accidentally destroyed fossils in their quest for treasure. Grabbing a handful of Turritella shells—neat stone spirals like unicorn horns, or digging up a doorstop-sized chunk of titan oyster may come at the expense of the rare and potentially important. Some of the most scientifically significant fossils aren’t much to look at: a tangle of mammal or fish bones or fragments of previously unknown plants.

The other big threat local paleontological resources have faced is commercial and residential development and highway projects that have eliminated huge swaths of the fossil record. Many important and potentially important sites have ended up bulldozed and buried under houses, shopping centers and roads. Old Topanga Canyon Road cuts right through a major bed of fossils. For years, the roadcut attracted collectors—from university research teams to local Girl Scout Troops. Roadside collecting on the narrow road became such a safety hazard for canyon traffic that it was shut down by the county in the 1980s. The area remains off limits.

In the coastal zone, paleontological resources technically have protection under the Coastal Act, but it’s complicated. Fossils are sometimes destroyed accidentally during construction because the contractor or property owner doesn’t realize what is there. Caltrans and County road crews bulldoze countless fossils every winter clearing rockfalls.

While many important sites are protected as part of the Santa Monica Mountains National Recreation Area, that doesn’t shield them from erosion. Wind and rain can rapidly weather exposed surfaces, erasing fossils that have existed for millions of years.

Despite the losses, there have been amazing discoveries, and there is still a lot of undiscovered history out there. Documented finds include ice age mammals like tapirs, mammoths, giant land sloths, a three-toed ancestor of the modern horse, and the jaw bone of Osteodontornis orri, a Miocene-era toothed sea bird with a wing span of 15-plus feet.

In Topanga, fossils are everywhere. There’s a property with a shoal of giant oysters along the driveway, and another with a whale vertebrae in the creek behind the house. Fossils turn up in the stones used to build fireplaces and garden walls. It’s not unusual to pick up a stone and find a tracery of fish bones, or a maddeningly indecipherable tangle of mollusk shells. It’s a reminder that life really is a beach, even if it’s a beach that has been folded, faulted, fragmented, turned sideways and lifted up to the mountain tops.

A research permit is required to collect fossils within the Santa Monica Mountains National Recreation Area. All other collecting in public open space is regarded as essentially vandalism. It isn’t illegal to prospect on private property provided one has the permission of the property owner, but the best way to collect is to take photos and leave the fossils in situ, where they were found, in the same way we document living plants and animals with a camera instead of stuffing or pressing them the way earlier generations did. Fossils are a limited resource, one that is part of a record that we have only begun to unravel, and that still contains the potential for amazing scientific discoveries.

Art in the Mountains