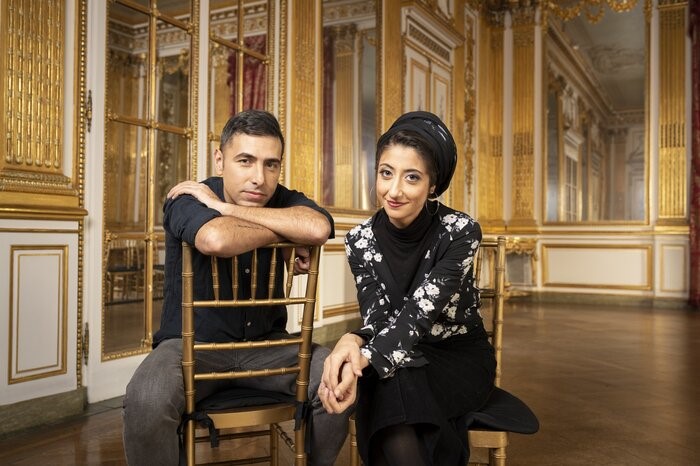 Two of the hosts and producers of NPR’s Throughline, Ramtin Arablouei (left) and Rund Abdelfatah. Photo from NPR website, npr.org
Books & Such

The best history is intimately connected to our own lives and serves in our quest to understand the world we live in. Throughline, a weekly podcast from National Public Radio, lives up to the standard; with the explicitly stated goal—expressed in its title—of connecting what was… to what is.

With a diverse cast of hosts, producers, and editors, Throughline has been tackling stories since February of 2019 that guide patient listeners interested in making sense of the modern issues which seem to be tearing us apart.

“Supreme” (12/10/20) examines how the Supreme Court’s nine justices have such enormous influence over the meaning of our laws. “America’s Caste System” (8/6/20) questions whether we should be viewing our racial divisions through a different lens. “There Will Be Bananas” (1/9/20) and “No Friend but the Mountains” (11/7/19) address America’s troubling interventions into Central America and the Middle East with an eye toward informing our nation’s role in the world today.

“Operation Nemesis” (5/6/21) explores the revenge campaign against the Ottoman officials who had overseen the murder of more than 1.5 million Armenians during World War I. This episode follows President Joe Biden’s recent acknowledgement of an “Armenian Genocide” and the political motivations behind a century of presidents who failed to do the same.

Other episodes deal with the persistence of white nationalism, voting rights, mass incarceration, and America’s relationship with North Korea, China, Iran, Russia, and so much more; all with that throughline in mind.

Most recently, Throughline produced a three-part series on American capitalism; what it is and, most importantly, what we’ve made of it. By examining its origins and evolution, this ostensible economic system is better viewed as an ideology that has as its central feature the myth of individual agency among an abundance of opportunity. The reality is that the institutions built up around American capitalism have both intentionally and unintentionally favored certain classes of citizens while erecting obstacles for others.

As an ideology, “capitalism” has become a political weapon wielded by those for whom capitalism was constructed. Succeeding at capitalism is promoted as evidence of individual accomplishment without regard for the wealth and privilege that made it possible. On the other hand, capitalism’s victims are portrayed as individual failures.

This is a history podcast that looks a heck of a lot like the opening moments of just about every history class I ever taught; at least what I hoped it to be. By beginning with a current events piece that tied directly into that day’s lesson, I tried to wire students into the notion that the informational chaos around us came from somewhere; almost nothing is new. Or, as Throughline puts it, “Every headline has a history.”

Most rewarding for me were those parents who let me know that lessons from my class made it to their dinner table; that a current news item they were familiar with was better understood after connecting it to its history—its throughline.

While studying the Industrial Revolution and urbanization during the nineteenth century, we followed news of people today struggling to adapt in our rapidly changing society.

During a unit on the Great Depression and FDR’s New Deal, news stories focused on the role of government in the modern economy and in our daily lives.

Vietnam War lessons became the tool by which we evaluated the country’s current military deployments.

Beyond the classroom, I have become convinced that minds can be opened when people take the time to learn our history’s throughlines.

There is that other history, however, which exists only to inflate the national ego. And this, I believe, is at the heart of what ails this country today. So, are we to continue to reconcile the past with our present or shall we succumb to the mindless banter of the MAGA cult who salute American history more than they study it?

It must be said that Throughline certainly approaches its analysis with a liberal bent; which, of course, becomes the fodder for the far-right as they reject out-of-hand any effort to rethink our past. The liberal sentiment, however, simply refers to approaching controversy with an open mind and a willingness to re-examine what we believe when confronted with new information. And, in the case of Throughline, that new information is often, simply, the fuller telling of familiar stories. And, in some cases—such as the 1921 Tulsa Race Massacre and the Armenian Genocide during World War I—stories are resurrected that were hidden for a reason.

A proper reckoning with history empowers our capacity for self-reflection and improvement. This stands in stark contrast to those whose sugar-coated version of our past leaves them conveniently and passively blind to the historical foundations of modern problems and inequalities.

Unfortunately, as the far right views this type of correction as “cancel culture,” or associates “critical race theory” with some conspiratorial plot to brainwash children, they are not attacking the substance of new information. Rather, they pick and choose anecdotal tidbits to attack the sources as radical-left historians entrenched in academia, mainstream media outlets that produce nothing but “fake news,” and progressives bent upon destroying the country.

Their specious arguments reach an audience largely ignorant of the significance of American history. And this is exactly how they prefer it. Indeed, in many cases, local and state legislation now mandates a non-critical approach to history instruction, limits discussions over the impact of slavery, and curtails the right of teachers to engage students in current events discussions.*

These are not the behaviors of a free thinking people. They are, rather, the sort of thing that happens when a group long used to wielding power begins to feel that power slip away.

If history is to be our guide, we should steel ourselves for the desperation which will almost certainly accompany their demise. And, since their greatest weapon is the ignorance of the masses, we should seriously consider arming ourselves – and our children – with knowledge. Throughline might be a good place to start.