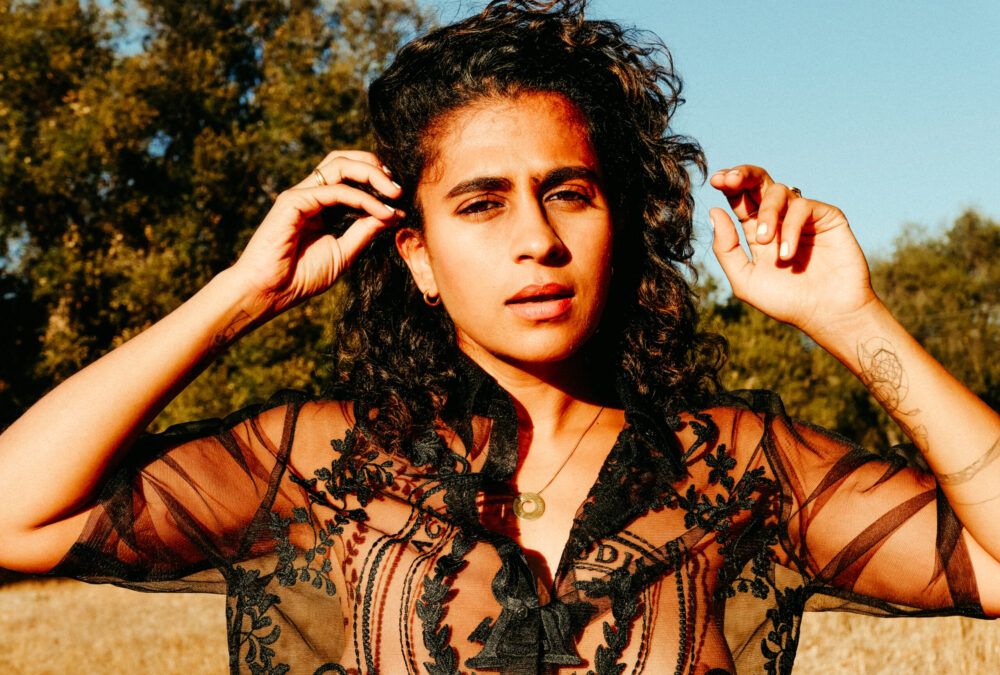 All photos by Saori Wall
Feature

Madame Gandhi: Sunflower in the Canyon

Madame Gandhi is fixing me a matcha tea before our meditation. “Would you like to add some elixirs to your cup?” she asks. She is incandescent, “yes”, I say without hesitation. Anything to radiate as she does. “Every cup is an opportunity,” she says as she stirs. Beneath sweet pine and oak, we sip and later she leads us through some breath work at her Topanga abode. I feel a near psychotropic experience, but it was reishi in my cup. As my shoulders drop and relax, I realize it had been a few days, weeks maybe, since I had done any semblance of conscious healing breathing. My body is simply and beautifully reacting to the oxygen in my lungs.

“Visualize three things you would like to see happen today,” she instructs. I visualize making a new friend, smiling beneath the shade of a tree, preparing my small family of two a nutritious meal. With my eyes closed, I feel an ear-to-ear grin widen across my face in the simplicity and attainability in the three things that sprung to mind. I am grateful. I walk away feeling gentler in my footsteps.

A few days later, I met Madame Gandhi for a photoshoot at Rosewood in Topanga. Naturally we wrapped, feeling more than peckish, at Endless Color pizza. Her vinyl is playing in the background. “It’s been really cool to be around people here in the canyon for whom healing is a priority. Whether it’s clean eating, eating vegan, gluten free. People here are really thinking about healing and food in a radical way.”

Kiran Gandhi, who performs as Madame Gandhi, is an artist and activist who has toured with MIA, Thievery Corporation and Oprah during her 2020 Vision Tour with morning dance party Daybreaker. Topanga has been home to her for the past year or so. “It would be a dream to play Topanga Days…a real joy to be able to contribute my music to a community that I feel has given me so much this past year,” she says, To connect more intimately to the canyon, she takes runs to Eagle Rock, delights and confides in our starlit skies that the mountain darkness permits. “We all feel like our problems are so big,” Kiran says. “Sometimes I look at the moon and I can hear her say to me, “Honey, I have seen centuries of you, you got this.”

As many who are fortunate enough to traverse this canyon, she imagines having kids and wanting to raise them in a more holistic way of living. In her career as a musician she actively seeks out venues that are all ages. “The forces that be, who do get our kids’ eyes are not always well intentioned,” she shares. “There are advertising dollars, distractions. I feel like my music has gotten better because I have been spending more time with kids. They are pure love. Kids are free and they are not molded by society yet.”

I ask how she prepares for a tour and she shares that she relies on visualization techniques.

“I really do visualize success,” she says.“I spend a lot of time visualizing. They talk about this in sports psychology a lot. When I take time ahead to do this I feel prepared. It’s very powerful. Even before a difficult conversation, where there is heavy emotion, I visualize success. I learned that in my business school degree at Harvard. While I was there, they had recently introduced these classes, Organizational behavior, where you look at the leadership side of business, to produce more effective leaders.

“Whether it’s visualizing a difficult conversation, say talking to your boss or perhaps managing down and talking to an employee, you imagine ‘what’s the best outcome of this scenario’. You will actually know energetically where you’re trying to get both people to arrive at. It also helps you understand your intention. Is my ego inflated or is there a genuine desire for mutual growth?”

That applies to her movement on stage. What space of the stage will she use, all of this giving her more freedom to improvise on that spot as well.

“We also don’t allow drinking on our tour, it’s pretty strict that way,” she says.“Until the last bit of gear is loaded in the van, you cannot have a drink. One wire gets left behind in Florida, now we’re in North Carolina, it just gets sloppy. We need people to be clear. Everyone says, ‘Oh I’m fine when I drink’ but really we are not. That’s the whole point — you’re not fine, that’s why we are drinking,” she laughs.

Before the pandemic began, Madame Gandhi was advocating for incarcerated youth with an organization called Give A Beat, where she taught music.

“The beauty of kids is that they are free and the irony is that we are putting them in these punitive situations. That’s not right,” she explains.”

Give A Beat reinforces Central Juvenile Hall near downtown LA where she used to live. When the pandemic hit Madame Gandhi wasn’t allowed to go into the prison. In December of 2020, more than 58 percent of children in LA county’s juvenile hall were quarantined and high numbers of staff were testing positive. The virus on the outside had entered the already debilitated incarceration system, where they were not and are still not equipped for containment and providing a safe space. She pivoted from in person visits to creating virtual classes for the kids to watch as well as giving a portion of the sales of her tour merchandise to Give A Beat.

“I have pretty radical views on incarceration,” Gandhi explains. “I am what you would call an abolitionist. I don’t think there should be any prisons. I think we can do better. I think it’s a quick fix, like we do so many things in America, you had a tough day at work, have a cocktail; your mind is hurting, have some pills. Now do I understand the value of these things as needed maybe to help soften the journey of us trying to heal ourselves? Sure, but I think most of the time when people commit a crime, they are acting out of pain, they are acting out of desperation, they are acting out of a system that has excluded them. When kids are stealing it is not because the kid is born bad, it’s because the kid feels like they don’t have any other option but to commit a crime.”

Gandhi shares she thinks about prison every day, every time she goes for a run or for a long drive. “That’s why I wrote a line in a song that I wrote in Topanga, ‘Run a few miles in the streets for my freedom.’ It makes me think of folks that are incarcerated, as well as women who live in parts of the world where women are not allowed to run. Either the athletic clothing that would be required to go for a run is too revealing, or maybe the law doesn’t even say, ‘I can’t run’ but the system says it’s not safe for me to run, if I run, someone may attack me. The video is very loving and lighthearted, but that line is serious for me.”

“I go into these prisons because that is the world we live in and I do want to honor the reality that so many folks are currently incarcerated, but I don’t believe that going into this prison to teach kids music is the end-all-be-all solution,” she says. “I think the solution is no prisons at all and understanding that we very much live in a system that validates people who have and invalidates people who do not. We punish those who do not have when they act out of human necessity and need. My heart is heavy with it, but it is better to acknowledge what is happening and actually do something about it.”

“Kids walk away from this experience in trying to write their own songs, tell their own truths, sing their own poetry, express their own ideas.” Like Give A Beat’s ‘Prose Of A Con’ which builds communication, connection and community through poetry, prose and letters. “It’s very empowering. You give someone a fish or you can teach them how to fish.”

Madame Gandhi’s first album was Voices in 2016, the second one was Visions in 2019. Vibrations will drop in 2022. “We made one every three years,” she explains. ‘Voices’ was from the heart chakra, ‘Visions’ was very third eye intuition and ‘Vibrations’, a very loving and healing album, comes from the heart. I feel like a butterfly coming out of a year and a half long cocoon of self growth, going deep being the best version of myself, and in service of a higher purpose. What is the energy of the artist when no one is looking, are they genuine? My artistry keeps me in check and reminds me I’m not just getting out of bed for myself, I am making music I believe will be nice energy for somebody. “I can’t travel but I can make something here in Topanga that someone in Kenya will hear and receive the energy. Music is one of the best forms of distributing good vibrations,” she says.

Get involved with Give A Beat and see how you can help https://www.giveabeat.org