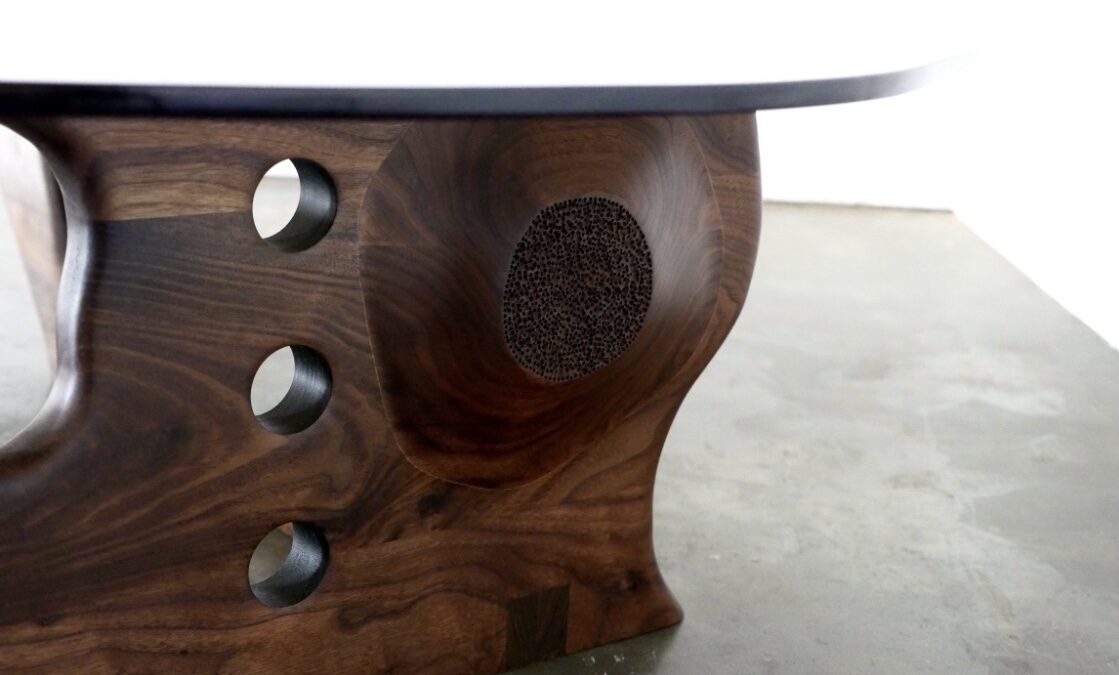 One may start to float away in thought peering closely at a handcrafted piece of furniture or sculpture by contemporary artist and designer Chad Hagerman. His work hovers closely between precision and spontaneity — many of his creations appear light to the eye, yet all are firmly grounded.

Hagerman Studios was founded in 2013. Before we both made the gradual migration north from Venice to Topanga Canyon, I would often pass by Chad’s studio garage on bike rides to Venice Farmers Market. I loved to see the new material he was working on, watch him welding and sanding, his beloved pup and a beautifully shaped sandy surfboard nearby. Now I visited his Topanga studio. Seeing the transition from the beach garage to the space he inhabits now is extraordinary.

Chad is an astute, sensitive, and punctilious craftsman. He has a keen eye for mending what some would consider imperfections in, say, the grain of the wood. I watch him accentuate a custom jewelry display by using an inlay bow tie, also called a butterfly joint, a graceful nod to Japanese-American woodworker George Nakashima.

“I’ve been putting bow ties in all my work,” Chad explains. “When I’m making simple clean line furniture pieces, I like to add a little bit of a detail like that to set it apart and make it one of a kind. It’s inconspicuous yet a curious attention to detail. I want to take my time and build beautiful things. I want you to be able to look at my work and know that I truly care about the piece.”

Chad was born in Bucks County, Pennsylvania. He inherited his love of woodworking from his grandfather, who loved collecting cars and was a woodshop teacher. In his teen and early adult years, Chad lived a fairly nomadic lifestyle spending several months at a time in different cities throughout Europe. When asked about mentors in his craft, he fondly recalls working with his former wife’s father, with whom he apprenticed in Sweden. Chad says they couldn’t communicate through language, but they communicated in gestures and through leaning on energetically working with one another in the shop. This left a profound imprint in how he approaches his work today.

Making patches, shaping dowels, cutting and sanding, oftentimes not quite certain where the idea will land, Chad finds inspiration in exposed wood, raw concrete, and bare steel. He has shifted through several expanding life happenings, like his mother being diagnosed with Parkinsons, by reflecting deeply on the reality of impermanence and material life. These experiences brought up many questions for him about what comes after death. It was after his mother’s diagnosis that he began studying Transcendental Meditation, and set on a journey of exploration of consciousness.

“In my early 20’s I was living a dissatisfied life or an unfulfilled life,” he says.” In retrospect it was waiting to find my own flow.”

Chad says he has explored the loss of ego, of ideas and the trappings of seeking contentment from outside of oneself.

A perpetual seeker, Chad’s work is a reflection of the exploration of spirit. His daily practice consists of healthy eating, morning transcendental meditation and chants. His studio is near several hiking trails. He finds contentment in sitting on a rock in Topanga State Park or diving into waves amongst friends.

Chad’s advice to other builders and makers is to redefine or consider alternatives to your current idea of success. He explains in a podcast recorded in April of last year, “Spiritual Seeker—God in the Monkey”, that he had to reimagine what exactly constitutes a great day. Maybe it’s a delicious surf or a really productive day in the studio, some days if waves are good, he’ll spend more time in the sea, working with the ebb and flow of ideas. Surfing had a profound impact on this understanding.

“What I love most about surfing is that as soon as you get on a wave you’re almost forced into the present moment,” he says. “When you can be relaxed in that present moment without the need to control any part of it you can reach a state of flow; nothing else in the world matters but what’s happening in that very second. When I’m in my studio, listening to good music and I have a project in front of me that I can visualize, I can drop into a similar flow state and create for hours. Time loses its significance and hours can pass as I chip away at a piece that’s taking shape. More often than not, after a project is finished, I’ll walk away with a very similar energetic boost as I do after a good surf. I couldn’t imagine a life lived where I’m not able to both surf in the ocean and create art and furniture.” To learn more about Chad’s work visit www.hagermanstudio.com @hagermanstudio