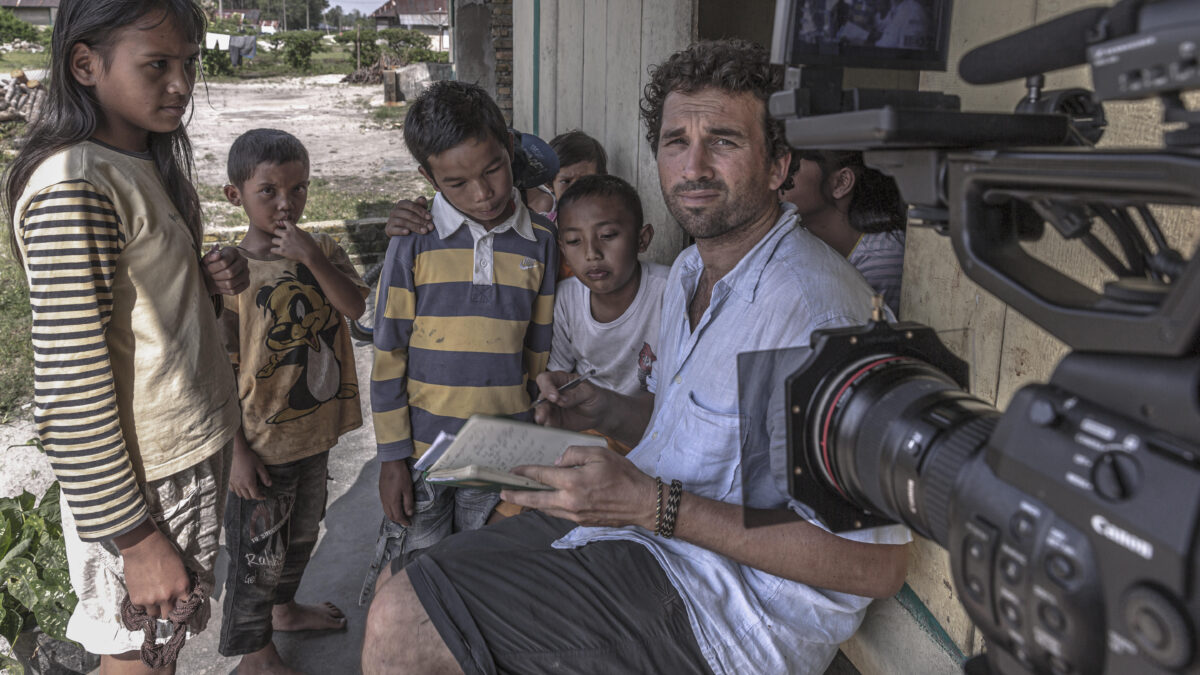 This year’s Topanga Film Festival is dedicated to exploring new frontiers at the intersection of story, technology, and humanity.

This is the 16th annual Topanga Film Festival and it will feature six days of virtual and hybrid events, screenings, and online mingling, followed by two nights of open air screenings under the full moon at the Topanga Community Center ball field. I met with one of Topanga Film Institute’s founders, and two filmmakers to discuss this year’s festival and the projects featured.

“I was always interested in stories,” Urs shares. “Story telling by film, short films before the short content form and the internet were popularized. Where do you see short films? You couldn’t really see them anywhere because nobody would show them. Festivals were the exception or public access TV stations. So this festival became a calling card for the short form.”

There are many moving parts not only in producing an event but strategizing the festivals filmmakers  submit to. “The strategy of which festivals to go to is extremely important for filmmakers,” Urs explains. “That is why people like John Fitzgerald, who has been involved with our festival as a director and programmer over the years, teaches a Film Festival Mastery class to help filmmakers.”

The Topanga Film Festival is community focused and with the energy of an army of volunteers. “It’s so much fun; it’s Topanga, we all live here and look forward to show our films beautifully this year back on the ball field at TCC,” Urs says. “Filmmakers want to bring their film here for the love of the community.”

Urs wants to steer away from the impersonal experience festivals that screen-in cinemas can sometimes have. “The difficulty here in Topanga is we have to create the entire infrastructure of the event, every time,” he says. Some film festivals rent out a couple cinemas and that can sometimes be an impersonal venue. “Here, it always comes down to parking and toilets and sound.”

The festival is in its 16th year and the atmosphere in Topanga this year thematically will be about breaking bread together, or as Urs puts it, “breaking film together”.

“Art, music, and film has the power to unite a divided society…I come as a filmmaker, I want to put this festival on to create a unique experience for filmmakers to show their film.”

All attendees at the physical venue will be required to show proof of vaccination.

This is Andrea’s first year with Topanga Film Festival. She is working as a showrunner and director in the TV doc space. Her commitment at TFF is to provide a place for the voices of young filmmakers to be heard and seen. “My partners in making that happen are the very talented Amy Jacobson Ruskin, and the equally inspiring Erica Laidley Phillipson,” she says. “I’m very excited, and a little timid, for my home community to witness my work as a film director.” Her film Side Effect is also screening in this year’s festival.

Andrea met Renny Grames, her directing and producing partner on Side Effect, at the Sundance Film Festival in 2019. “There was an immediate sense that we wanted to work together,” Andrea says. They put out a call for scripts and landed on Marty Lang’s brilliant short about a psychiatrist who over-prescribes for financial gain.

“The tone was fresh, a satirical thriller. We shot the film in Salt Lake, where Renny and her husband Boston have an incredible network of filmmaking friends. The folks there are extremely talented and friendly. I’m honored to say that on its festival run Side Effect has picked up Best VFX awards (Boston), Best Actress awards (Renny), Best Thriller and Best Horror awards (the whole team) and Best Director awards (Andrea and Renny).”

What advice would you give to aspiring filmmakers enthused about getting into the industry?

“You have all the tools you need to make a film now, just begin.”

What are some ways you feel filmmakers and their crews can further support one another?

“I just had the opportunity to work on my first all-female crew. The only reason I hired all women was because my executive producers required me to. We get comfortable working with the same people over and over, it makes sense, you want to work with people that you know will deliver. I’m glad I was pushed to stretch this time to find new teammates because they all rock, and now I know more crew members who can deliver. If you hire at least one new person from an under-represented community on each project, you are not only bringing that person into the fold, you are expanding your network of great crew and uplifting that community.”

Paul Redman has made participatory short films for over 20 years, designed to have impact and to affect change using a combination of events and media to showcase the work of indigenous and local peoples.

“I am on a journey to understand what it means to belong,” Paul explains. “Filmmaking can be a beautiful medium to listen, to collaborate and to reflect positive heroic stories that empower, uplift and inspire.”

I ask Paul Redman, who is a filmmaker participating in this year’s event with a showcase of films and a panel to tell us a bit about his projects and why indigenous wisdoms are integral to tackling the climate crisis.

“We produce a range of short films and we commission and train indigenous filmmakers to make their own films. All can be seen at www.ifnotusthenwho.me,” he says.

“To avert this climate crisis we need a new way of thinking, a new of being with the old extractive and colonialist mindset only serving to get us into this mess. This is why we must turn to Indigenous peoples who still live harmoniously with nature. They are an example of being human as we are all meant to be, in community, connected to nature and with deep spirituality and reverence for Mother Nature. If we feel stuck and we can’t imagine a positive climate future then why not look to imaginations that are still connected to our earth, still living in harmony, still indigenous. Besides the development of a new climate consciousness there is also some very concrete science that shows where local people are supported and empowered local landscapes thrive.”

How did this pandemic change or affect your organization’s approach to your work?

“We got creative and we supported our networks better, building new allies remotely for when we are able to hug again. We also help our networks by doing a lot of remote communications training and commissioning of filmmakers. Now more than ever we need local stories from local people.”

Who are some of the key team members in your filmmaking process and in what ways did they contribute?

“We have a team of digital nomads from all over the world both indigenous and non indigenous who amplify, support and make films of their own. Social media experts, film producers, finance experts and admin people who are the engine that motivate the impact we have.”

What advice would you give to aspiring filmmakers and/or leaders in social justice movements?

“Communicate clearly in short easily accessible language or visuals. We need solutions quickly that we can all understand and get behind. Use your passion in focused, clear and collaborative ways. ”Visit www.topangafilminstitute.org to see the full film lineup and purchase tickets.

Recovering the Earth at CSUN

How to Love Mercury When it’s in Retrograde.

A New Take on How to Be More Confident

The Observation + Release Method: How to Manage Your Emotions in a Healthy Way