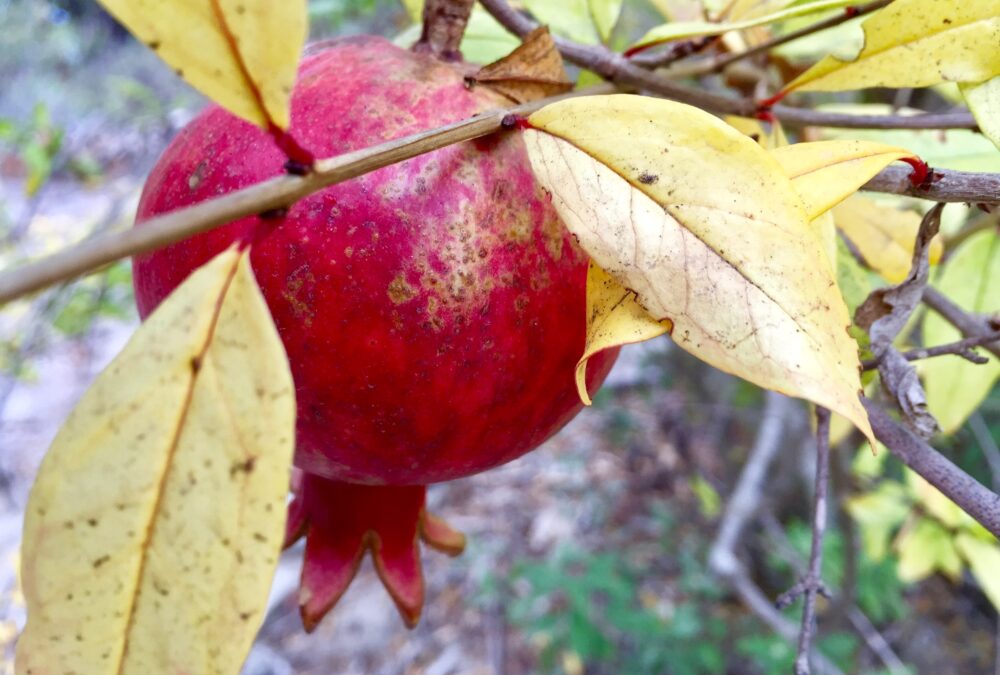 The pomegranate tree, Punica granatum, is a tough desert survivor that seems to thrive in drought and heat. And this October, in gardens and backyard orchards all over the Santa Monica Mountains, trees are bowed under the weight of red fruit; weighed, too, with myth and story.

In Greek mythology, the pomegranate is the symbol of Persephone, the daughter of Demeter and Zeus, who strayed too far from her mother’s watchful eye while gathering flowers and was caught by the god Hades, and taken to the land of the dead. Persephone unwittingly bound herself to the underworld by eating a pomegranate offered to her by the king of the dead.

In grief for the loss of Persephone, the sun grew cold and the plants withered and died. Demeter, the harvest goddess, begged Hades to release her daughter, and at last he agreed, but because she had tasted the food of the dead, she was only allowed to return to the sunlit lands in March and must return again every autumn to the underworld.

That’s why, according to the storyteller, the pomegranate ripens in the fall—to remind the goddess of her promise. And it’s why the tree’s bright orange flowers bloom so early: a reminder that winter, unlike death, is not eternal.

Perhaps these natural characteristics are why this ancient fruit, thought to be one of the earliest cultivated plants, is associated with death and rebirth in so many cultures.

Pomegranates have a long history not only in Greece, but in Turkey and Sicily. In fact, the Sicilian town of Enna has long been identified as Persephone’s home. And the pomegranate was already being cultivated in Sumeria, Egypt, the Indus Valley, and China for at least a thousand years before it arrived in Europe.

There’s a popular story that the Romans brought the pomegranate from North Africa to Italy, based perhaps on the source of the Latin name Punica—the Roman name for the city of Carthage (granatum, the other half of the Latin name, means full of seeds, and it gives us the words grenade, from the shape of the fruit, and garnet, for the color). However, there are depictions of pomegranates in Etruscan art, proof of its existence in mainland Italy during pre-Roman times.

The pomegranate has witnessed the rise and fall of the Egyptians, Sumerians, Assyrians, Minoans, Mycenaeans, Carthaginians, Greeks and Romans. This tree is mute witness right now to the destruction in Syria and Afghanistan. In more stable times in those countries, many varieties of pomegranate would have been sold in market places that are now rubble, and enjoyed by families who once had homes and are now scattered and broken.

By the sixth century, the pomegranate and its ancient symbolism had been absorbed by the Christian religion. The fruit became a symbol of the resurrection of Christ instead of the goddess, an emblem of hope for a new religion. In the Muslim Qur’an, pomegranates grow in the gardens of paradise, a living symbol of God’s benificence.

The Spanish brought the pomegranate to the Americas in the seventeenth century. It arrived in California in the mid eighteenth century, with the missionaries, and has remained to become both a commercial crop and a much-loved garden plant.

The Romans transformed Persephone into the goddess Proserpine, but she had already made the transformation in Greek mythos from Kore, the maiden, into the powerful queen of the underworld.

According to Homer, Persephone enforces the curses of the living upon the souls of the dead, but she also sometimes intercedes with compassion in the weighing of souls, and she grows the poppies that confer the gifts of sleep and forgetfulness to mortals.

Persephone has dwindled from a powerful goddess to a story for children, but pomegranates are enjoying a surge in popularity in this country, due to their reputation as a “miracle food.”  To me, the miracle is the history and mythology, bitter and sweet as the fruit itself, that continues to be rooted in this living link to the past.

Pomegranates remain a potent cultural symbol throughout the Middle East. Director Sergai Parajanov’s luminously beautiful and bizarrely surreal film The Color of Pomegranates opens with an image of the vivid red juice of the fruit spreading like blood across white linen, a metaphor for the life blood of Armenian poet Sayat-Nova, the subject of the film.

The 2018 Israeli film In the Land of Pomegranates is a documentary about a group of young Palestinians and Israelis who are invited to Germany to join a retreat called “Vacation From War.” The pomegranate is a symbol of the potential for peace and rejuvenation but also for the destructive capacity of the grenades that continue to tear the fabric of life for a generation that has grown up in a war zone.

A new short film entitled simply Pomegranate is currently in production. It is directed by Iraqi American Wean Namou, and described as the first Iraqi American, female-led, independent feature film. The pomegranate in the title is a metaphor for the people of the community of Chaldean Christians and Muslim Iraqis who coexist—sometimes uneasily—in a tight-knit Detroit neighborhood, like the seeds in a pomegranate.

The Color of Pomegranates is available as a 2015 Criterion Collection Blu-Ray and DVD release, featuring a beautifully and meticulously restored cut that is described as being the closest to director Sergai Parajanov’s original vision. This gloriously strange and evocative film is well worth watching or revisiting.  https://www.criterion.com/films/29219-the-color-of-pomegranates

In the Land of Pomegranates, directed by Oscar-nominated documentary filmmaker Hava Kohav Beller, is available on DVD or via streaming: http://www.inthelandofpomegranates.com Weam Namou’s film Pomegranate is still in production, but her novelization of the story was released earlier this year. Learn more at https://pomegranatemovie.com

How to Eat a Pomegranate

The only point of contention the pomegranate causes is how to eat one without ending up looking like the survivor of a horror film. If it is left on the tree long enough, the fruit eventually bursts open on its own, but for impatient pomegranate eaters who would rather not wait or risk sharing the treat with wasps or ants, there are a variety of techniques, some so complex that it would be easy to imagine they are some kind of ceremonial holdover from the days when Persephone was worshiped as a goddess.

Anyone who has tackled a pomegranate the wrong way will not be surprised to learn that the flowers, rind, and juice are traditional sources of dye. There are a number of approaches to avoid making a mess, from cutting the fruit in a basin of water to the wack-it-with-a-wooden-spoon school of thought, but the traditional Mediterranean and Middle Eastern technique is arguably the easiest and least messy:

With a sharp paring knife, gently cut all the way around the blossom end, being careful to score the skin of the pomegranate but not cut into the arils—the official term for the juicy seeds.

The blossom end should now be like a cork in a bottle. Pull it out and remove any of the white pith that is attached to it.

Look for the white membrane that separates the sections of seeds and carefully score the skin along every section, not cutting too deep and stopping before you reach the stem end of the fruit.

Pull the pomegranate apart. It should open like a flower.

Once you remove the paper-like bits of membrane, the pomegranate is ready to eat. Just be careful who you eat it with, especially if the person offering you the fruit is a kingly but dour stranger…

In Film We Trust