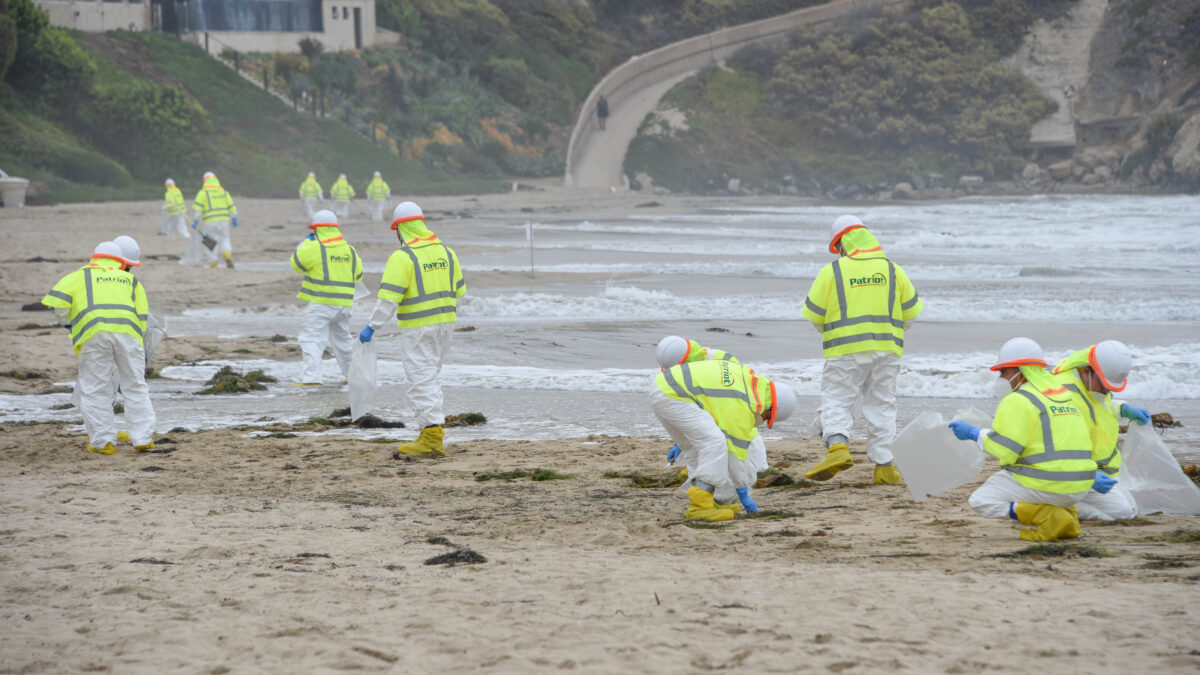 An oil spill at Huntington Beach has clogged the Orange County coastline with as much as 132,000 gallons of toxic crude oil. The United States Coast Guard, which is overseeing the cleanup, described the spill as “a major marine casualty.” The disaster originated in federal waters nearly five miles off Huntington Beach, where a pipeline connected to an oil platform ruptured. So far, the spill has covered an area estimated at 13 square miles.

The beach reopened to the public on October 11, but questions about the incident remain and the toxic residue will continue to impact marine life in the area for months or even years.

Animal rescue organizations, including the Pacific Marine Mammal Center and the International Bird Rescue raced to capture and de-oil birds and animals. Victims of the spill include seven federally threatened Western snowy plovers.

The spill is a blow to Huntington Beach’s surf-based economy. This is a community that has worked hard to change its image from an oil town to a clean, green beach destination. Huntington Beach was ground zero for the Orange County oil frenzy of the 1920s. A forest of oil derricks appeared, and the once thriving wetlands had a reputation for spontaneously bursting into flame from all of the oil in the water. By the 1960s, most of the area’s more than 1000 oil wells had moved offshore. The boom ended in the 1980s, following the catastrophic 1969 Santa Barbara oil spill that helped fuel the state’s environmental movement and turn the tide against offshore oil extraction. Today, the coastal community has 151 active wells.

Elly, the platform connected to the ruptured pipeline, and an adjacent platform, Ellen, were built by Shell Oil in 1980. Elly houses equipment that transfers the oil pumped at the platforms into a nearly 18-mile-long pipeline that brings it to Long Beach for refining.

The aging platforms and pipeline are currently owned by Houston-based Amplify Energy. Reporting in the Los Angeles Times raises questions about Amplify Energy, which “emerged from bankruptcy just four years ago and amassed a long record of federal noncompliance incidents and violations, according to the report in the October 4 issue of The Times. The paper’s investigative reporters also uncovered the fact that Amplify had “plans to initiate new drilling near the site of the leak in the final three months of this year.” There has been a moratorium on new drilling in place since 1994, but a loophole allows oil companies to drill new wells on existing platforms.

The pipe connecting the platform to the coast may have been leaking for months, but the damage that caused the rupture is thought to have been caused by a cargo ship dragging its anchor.

This spill is small compared to the February 1990 American Trader disaster, which was also caused by an accident with an anchor. In that incident, the hull of an oil tanker was breached by its own anchor in the shallow water off Huntington Beach, spilling more than 400,000 gallons of crude. Regardless of how the October 2021 disaster may have begun, activists are furious that spills like this still happen.

In 2015, when an oil pipeline at Refugio Beach in Santa Barbara County poured 100,000 gallons of crude into the water, there were calls for new regulations, for closing loopholes and holding the oil industry accountable for aging pipelines and disused infrastructure. The California Coastal Protection Act of 2015 was supposed to remove the oil industry’s foothold. Instead, under the Trump Administration, pressure for more offshore drilling and extraction increased.

The California Department of Justice has launched an investigation into the Huntington Beach spill, and a number of key California legislators are pushing once again for an end to offshore drilling.

“It’s time to put an end to offshore oil drilling on the West Coast,” Representative Ted Lieu tweeted in the aftermath of the Huntington Beach disaster. “Oil spills are one of the greatest perpetual threats to our coastal communities…While the recovery efforts have so far been heroic, this should not have happened in the first place.”

“The Talbert Marsh, a 25-acre-wetland along Huntington Beach where 80 species of birds rest during their long migrations south, was covered in oil,” Suckling stated. “It will take years before we know the full damage to wildlife. Our latest legal action shows how the government’s existing Endangered Species Act analysis failed to predict or plan for an oil spill as big as the ongoing disaster in Southern California’s San Pedro Bay.”

Suckling’s organization has also sued the Biden administration for opening 79 million acres of the Gulf of Mexico for oil and gas leasing.

“We’ve seen firsthand the danger posed by offshore drilling in California,” Suckling wrote. “This moment — oil on our beaches, our climate teetering, the extinction crisis more dire than ever — calls for urgency. We have no time to wait.”

Autumn in the Santa Monica Mountains Is Subtle but Beautiful