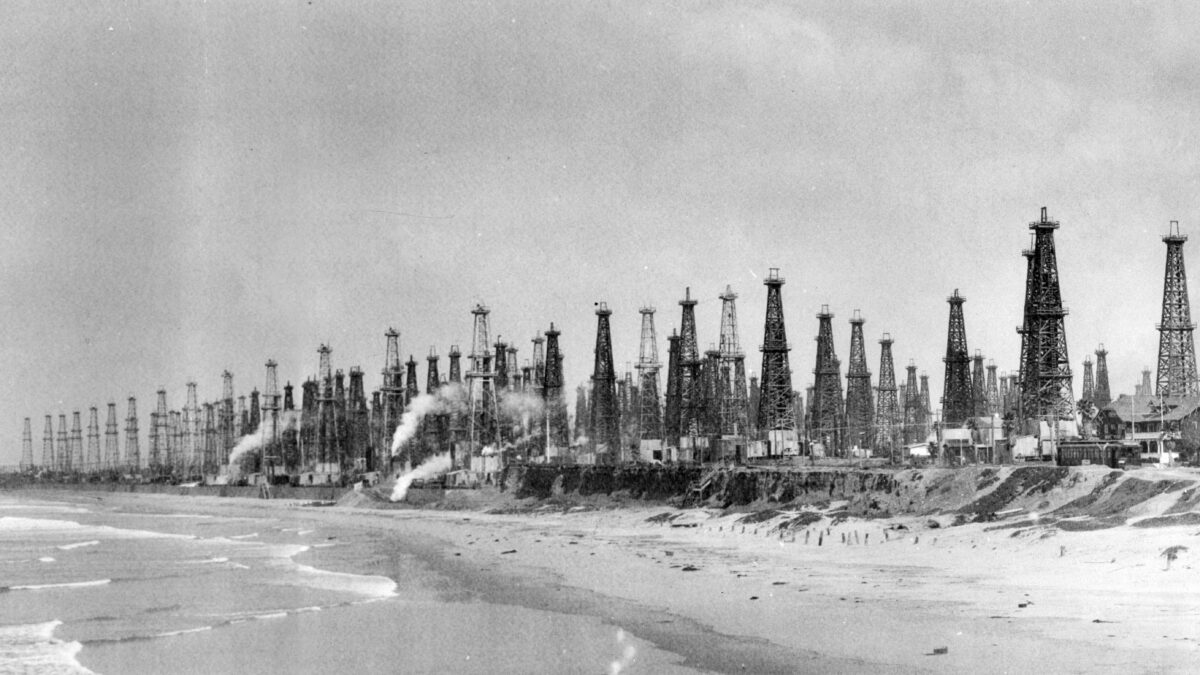 Huntington Beach, circa 1926, a bristleing forest of oil derricks crowding the skyline. This seaside community, famously described by the Beach Boys as “Surf City,” has made the transition from oil town to beach destination, but the October oil spill is a reminder that oil is still a threat to the environment.
Discover

The Elly Platform oil spill at Huntington Beach has refocused attention on the hazards and history of offshore oil drilling on the Southern California coast.

The Chumash took advantage of natural petroleum seeps, using the tar they collected to seal the seams of their plank-built watercraft, or tomols, and as an all-purpose adhesive, but the full extent of California’s coastal oil reserves wasn’t discovered—or exploited—until the late nineteenth century.

Edward Doheny discovered oil in downtown Los Angeles in 1892. He became fabulously wealthy as a result, and kicked off a major oil rush. The Huntington Beach Oil Field was first developed in the 1920s, in a free-for-all straight out of an Ayn Rand novel. Oil prospectors, or “wildcats,” made fortunes before the new big oil companies swooped in and consolidated the wells. The peaceful seaside community of pristine beaches and wetlands was transformed into a suburb of hell. Toxic sludge filled the creeks, spontaneously bursting into flames at times and the skyline bristled with oil wells.

The Huntington Beach Oil Field is part of a network of petroleum-rich sedimentary rock that extends for miles along the coast all the way up to Santa Barbara. Topanga and Malibu were spared the oil exploitation Orange County experienced because the oil-bearing sediments were offshore and early oil exploration on land was unsuccessful. That didn’t stop would-be oil tycoons from trying. May Knight Rindge, who owned the entire Topanga Malibu Sequit Rancho in the 1920s, hired a wildcat crew to dig test wells on top of Point Dume and along Westward Beach. Oil rigs also went up at Carbon Beach, near where the fire station stands now, and in remote and hard to access Encinal Canyon. No recoverable oil was ever found on land, but there was the potential for plenty of it out in the bay.

The first offshore ocean oil rigs in the world went up at Summerland in Santa Barbara County in the late 1890s. The rigs were built on rickety wooden piers. By 1900, there were 200 wells and 11 wharfs. The oil soon ran dry, but beaches in the area are still polluted by petroleum leaking from antique wells.

By the 1960s, as drilling technology evolved, deepwater platform drilling became a reality. Oil drilling off the local coast seemed inevitable. Thousands of ocean oil leases were in play by the late 1960s—more than 3,000 in the Santa Monica Bay, including three directly off of Topanga State Beach, and many more along the Malibu Coast.

Chevron filed drilling reports for a site off Bluffs Park in Malibu in 1970. This lease appears to have been previously owned by Standard Oil as early as the 1950s. There was a test well off Puerco Canyon in 275 feet of water drilled by Shell Western Exploration and Production, Inc. in 1969. Exxon drilled a test well off the coast at Paradise Cove in 189 feet of water in 1970—a “notice of intention to drill” form dated 1965 for this site is stamped “prospect well confidential, please do not publish.” The lease only expired in 1998 and the data was released with a memo that states that the well is “near other state and federal leases”, despite the fact those leases were technically placed off limits in 1994.

All of those plans were moving forward with what seemed to be unstoppable speed, when the catastrophic Santa Barbara oil spill occurred in January of 1969. Union Oil’s Platform A, six miles off the coast of Santa Barbara, experienced a massive blow out that ejected an estimated 11 million gallons of crude oil into the water. The damage to the environment was staggering. It remains the third largest and most destructive spill in U.S. history, exceeded only by the Exxon Valdez spill in 1989. and the Deepwater Horizon disaster in 2010.

The Santa Barbara spill helped launch the contemporary conservation movement. It was the driving influence for the first Earth Day, and it galvanized activists up and down the coast and all over the country. The National Environmental Policy Act (NEPA) was passed in1970 in direct response to the disaster.

Closer to home, local activists rallied to oppose drilling plans for the Santa Monica Bay. They signed petitions, wrote letters, and packed buses with protesters bound for meetings in downtown Los Angeles, and their voices were heard.

An August 28, 1974 Los Angeles Times article states: “[The] Assembly asked the U.S. government not to consider leases for 5,000 offshore oil wells between Laguna Beach and Malibu until a Federal Energy Administration report [is completed].” Drilling was stalled, at least temporarily.

The lobbying power of the oil industry could not combat the anger and determination generated in the aftermath of the 1969 Santa Barbara disaster. The oil and tar balls fouling beaches, rocks, and killing marine life along miles of coast was a constant reminder of the disaster that could not be ignored, but not for want of trying.

A renewed push for drilling in the 1980s resulted in the federal government authorizing 37 vast offshore lease areas from Point Mugu to Santa Maria. It was an unpopular move and it met ferocious opposition that resulted in the 1994 California Coastal Sanctuary Act, which “declares that offshore oil and gas production in certain areas of state waters poses an unacceptably high risk of damage and disruption to the marine environment of the state.” That act protects the coast, including the Santa Monica Bay, from new oil drilling projects, but there is a major loophole.

The Act “authorizes the State Lands Commission to enter into a lease for the extraction of oil or gas from state-owned tide and submerged lands in the California Coastal Sanctuary if the commission determines that the oil or gas deposits are being drained by means of producing wells upon adjacent federal lands and the lease is in the best interest of the state.”

There are still thousands of active and potential wells in Southern California and conservationists are concerned that the oil industry, which has a bottomless war chest for lobbying, will eventually find a way to exploit that loophole, leaving the coast vulnerable to future drilling projects.

It’s unfortunate that it often seems to take a disaster to galvanize needed change. The Huntington oil spill is another inflection point in the troubled history of oil and water in California. Does it carry enough weight to finally put an end to a catastrophically destructive chapter in California’s history? Maybe, but only if enough people speak out.