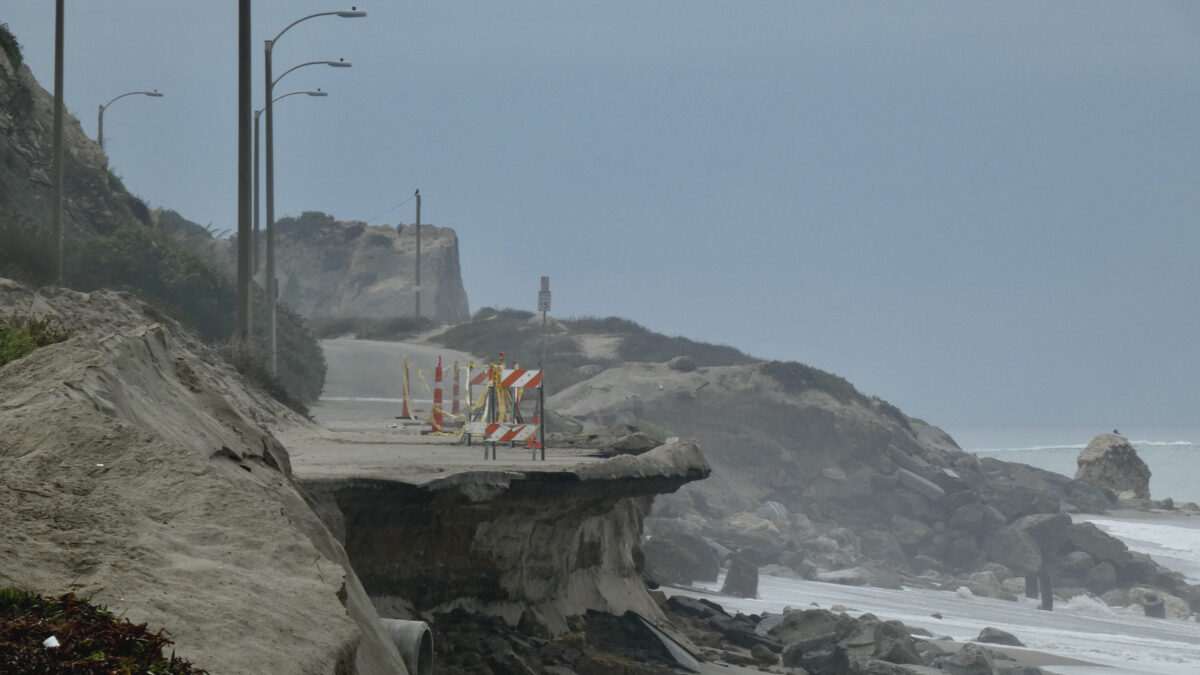 Beachgoers and local residents had a firsthand look at the power of coastal erosion this summer, when big surf and high tides combined to wash out the road leading to the Westward Beach parking lot in Malibu. The damage was swift and extensive. The road has been rebuilt and recently reopened, but it is still vulnerable. Photos by By Suzanne Guldimann
Discover

King tides, some of the highest tides of the year, arrive this weekend. They offer a fascinating but chilling look at a future with increasingly higher sea levels. King tides occur when the gravitational pull of the Earth, moon, and sun align, producing the highest tides of the year. On the local coast, these tides are about a foot higher than an ordinary high spring tide (“spring” because they spring onto the land, not because they occur during springtime). A foot may not seem like much, but imagine the energy needed to move that volume of water. Combined with surf from a winter storm, the effect can be both dramatic and destructive. King tides occur only a few times a year, but they are a preview of something coastal communities are going to have to learn to live with and adapt to in everyday life, as sea level increases.

The California Coastal Commission is attempting to prepare for the coming flood. The commission unanimously approved an update to its sea level guidance document in November, establishing a new benchmark that requires project planners and engineers to accommodate as much as 10 feet of sea level rise by 2100, four feet more than the previous recommendation of six feet.

The Coastal Commission released the first draft of the “Sea Level Rise Policy Guidance,” in 2015. It was the first attempt to codify the best available science on sea level rise and potential ways to address the issue during the coastal planning process. The document was updated in 2018, based on research by the California Ocean Protection Council Science Advisory Team that found that melting ice sheets in Antarctica have the potential to impact California with greater sea-level rise than the world average, putting the state’s beaches, important infrastructure, and a sizable portion of the population at risk.

That won’t come as a surprise to anyone who has watched summer storms this year undermine Pacific Coast Highway at Big Rock Beach and up the coast at Thornhill Broome.

Sea level along the California coast is between six and eight inches higher today than it was when PCH was built in the 1920s, and a third of that total has occurred in just the last 25 years. It’s expected to rise by another six inches just over the next 15 years, due to ice melt and thermal expansion—the expansion of the water as it warms.

For every foot of ice that melts in western Antarctica, California’s sea level could rise by as much as a foot and a half, making sea level on our coast higher than the highest King tides we currently experience. High tides and storm swell or big surf events will magnify the impact even more, and intensify the potential for lasting damage from accelerated coastal erosion, creating a major challenge for seaside communities up and down the coast. The North coast is already grappling with this issue.

Up at Gleason Beach in Sonoma County Caltrans is relocating a section of Highway 1 a full 400 feet inland, at a cost of $30 million. It’s being called Caltrans’ first sea level rise adaptive project. It won’t be the last. The coast between Bodega Bay and Jenner is eroding at an astonishing rate, an estimated 14 inches a year, and there are problems closer to home.

This approach used to be called “managed retreat,” but the term was so unpalatable that the Coastal Commission is now referring to it as “phased adaption,” while the Surfrider Foundation has opted for the term “resilient relocation.”

There is room at Gleason Beach to accommodate phased adaptation. That’s not the case in Malibu, where Highway 1 runs on a narrow strip of land with the sea on one side and the cliffs on the other, and some of the most expensive real estate in the world sandwiched between. There is no optimistic euphemism for what will happen when the sea reclaims this stretch of the highway. It won’t be a retreat so much as a rout, and it’s already begun. A major effort to shore up the crumbling highway at Thornhill Broome Beach just north of Malibu has been under way for years. Los Angeles County lost the road to the parking lot at Westward Beach in Malibu this summer to rapid coastal erosion. The replacement road is complete but much closer to the water than the original, even with the addition of massive amounts of rock revetment for protection. As sea level rises and the waves at high tide reach farther inland the challenge to maintain the status quo increases.

And the status quo may change, too. At the same Coastal Commission meeting in November, the commissioners heard a presentation on how sea level rise will impact the mean high tide line—the imaginary demarcation that separates public tidelands (wet sand) from private property (the dry sand above the “ordinary” tide line). The recommendation is to move that line landward. That’s a problem in places where public tidelands are hemmed in by houses, roads and seawalls. It’s a complicated issue, and one that is changing rapidly.

Several years ago, the city of Malibu proposed a parking realignment at popular Westward Beach that includes proposed head-in parking stalls and a bike path on the beach sand. The plans are scheduled to be heard by the Malibu City Council meeting on November 30, but recent sand loss and erosion along that stretch of coast now puts the tide line within feet of the east end of the proposed parking area, raising concerns that parts of this  site will be underwater before the plans are finalized or the first shovel planted.

Managed retreat may not be a popular concept, but it’s one we are all going to hear a lot more about as the water rises. There aren’t any easy answers.

This winter’s King Tides are on December 4 and 5, 2021 and January 1, 2, and 3, 2022. These will be the highest and the lowest tides of the season and the year. Check NOAA’s Tides and Currents website, or your favorite tide app for times: https://tidesandcurrents.noaa.gov

Three Takes on the 19th Century