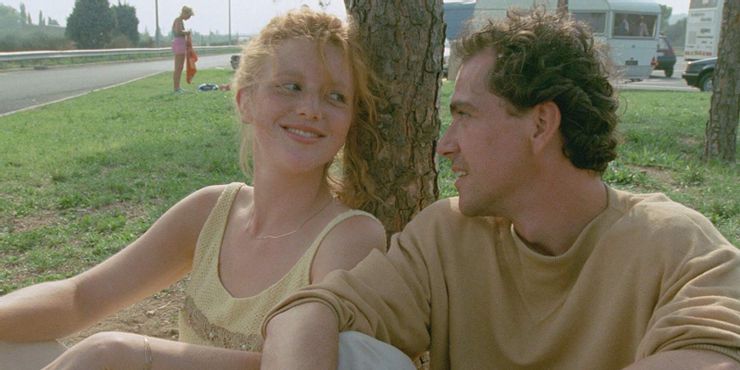 The Vanishing, 1988, Directed and Adapted by George Sluizer. Director Stanley Kubrick publicly regarded this 1988 adaptation as “the most horrifying film [he’d] ever seen,” including his own, very well-known and oft praised, horror film, The Shining (1980).
Feature

The Vanishing, or Spoorloos, is a brilliant and suspenseful Dutch thriller from 1988, directed by George Sluizer. The film is an adaptation of Tim Krabbé’s novella from 1984, The Golden Egg or Het Gouden Ei. The Vanishing follows a young Dutch couple, Rex (Gene Bervoets) and Saskia (Johanna ter Steege), driving to France for a vacation. At the beginning of the film, Saskia tells Rex of a recurring nightmare she’s been having; the horrible feeling of being completely isolated, trapped inside a golden egg floating through space—hence, the title of Krabbé’s novella. Saskia and Rex stop at a busy rest stop to use the bathroom, and fill up with gas. The camera cuts to a different car, inside which a man is seen dressing his arm with a fake sling. The man ominously appears in, and around, the convenience store, throughout the scene. He surveys the crowd, watching the many people at the rest stop. His eyes particularly seem to follow Saskia.

Rex and Saskia take their time at the rest stop. They frolic—playing frisbee in a grassy area outside the store. The couple’s dynamic is natural and charming, and we begin to fall in love with their sweet chemistry. The weather is beautiful, sunny and safe. Rex and Saskia bury two coins at the base of a tree—seemingly as a symbol for their undying love. Then, Saskia leaves Rex at the car, and goes into the convenience store to buy a beer and coke for the road. She never comes back.

The range of emotions shown in both Bervoets’ and Steege’s acting in this beginning sequence is vast enough to inspire much empathy in the first warmed, and then quickly broken, hearts of viewers. Rex searches frantically for his lost love, shouting her name, approaching other travelers and asking for help in French—even though this isn’t his native tongue. The multilingualism of this film is seamless, and falls in line with the plot very naturally. Rex is fluent in both Dutch and French, and he speaks in both throughout the film, depending on his company. Saskia’s native language is Dutch and she knows only minimal French. At one point, she is seen struggling to find the right words during an interaction with a French-speaking individual. Steege embodies Saskia’s playful and free-spirited character effortlessly, and she won a European Film Award for Best Supporting Actress for her role in The Vanishing.

The film continues, jumping ahead three years, and Rex still hasn’t found Saskia. He has tried to move on—he has a new girlfriend, Lieneke (Gwen Eckhaus), whom he cares for deeply—but the mystery of Saskia’s disappearance still haunts him, and he hasn’t given up on his search. Meanwhile, viewers are let into the life of Raymond Lemorne (Bernard-Pierre Donnadieu)—the man at the rest stop with the fake sling. For viewers, the mystery of this film is less about who the abductor is, since early on we are led to believe that Raymond is, indeed, the one who took Saskia. Instead, viewers are left to wonder what it is that he’s done with her, why he took her, and how.

Little by little, through flashbacks, viewers are shown pieces of Raymond’s life before the abduction. We see the calculative nature of his preparations, his careful tracking of his own trial and error; immense intelligence put to a bizarre and morbid use. Raymond Lemorne comes off as a non-threatening, wealthy family man, which makes his clear obsession with kidnapping a young woman even more terrifying. Post-abduction, Raymond watches Rex, follows him, sends him postcards with clues about where to meet up, but never actually shows his face. He taunts Rex, incessantly, driving him insane, and making it impossible for him to let go of the past. By the end of The Vanishing, we have seen enough progression in Rex’s current life, as well as in Raymond’s past, to satiate our curiosity (as well as make us want to sleep with the lights on).

The film’s score, by Henny Vrienten, is quirky and subtle, and matches the mood of the film perfectly, creating suspense, and often a false, sometimes comical, sense of normalcy. The film is a true art piece, from the phenomenal acting and intriguing plot, to the subtle but intentional foreshadowing. It is refreshing to see such a fear-inducing film with so much sunlight. Sluizer did not rely on a nighttime setting, jump scares, or gore to get under the skin of his audience; his confidence in the making of Spoorloos shows, and it was quite warranted. The Vanishing (1988)—98% on Rotten Tomatoes. Rent now on Amazon Prime Video, or Apple TV.

Learning to Express Our Feelings Needs to Be Taught At Home

The Desire to Be Liked

How to Hold Sacred Space and Honor Someone’s Process