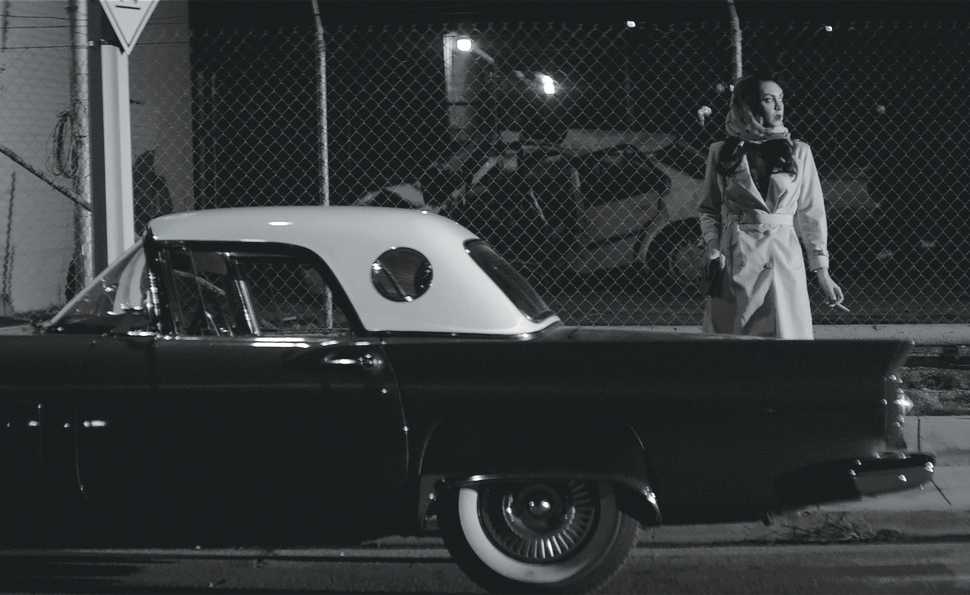 A Girl Walks Home Alone at Night (2014), is a beautiful, quirky, and artistic Persian-language film, written and directed by Ana Lily Amirpour, and shot completely in black-and-white. Production took place in Taft, California, although the film is set in a fictional Iranian city called “Bad City.” Despite the aforementioned absence of actual color in the film, the beautiful contrasts of each shot, and the unique style of the cinematography, make the whole thing so undeniably vibrant that it feels almost colorful.

The film begins following a young man, Arash (Arash Marandi), who lives with and cares for his father, Hossein (Marshall Manesh), who is addicted to heroin. When Hossein’s drug dealer, Saeed (Dominic Rains), is owed money that neither Hossein nor Arash has, Saeed takes possession of Arash’s car. Saeed then reveals that he is also a pimp, during an interaction one night with Atti (Mozhan Marnò), a sex worker. Already proving himself to be an evil character, Saeed sidesteps giving Atti her cut of the money she earned for him, abusing her—mentally and physically. All the while, a dark, shadowy figure looms, watching.

This figure is given a face later that night; we see a woman (played by Sheila Vand) dancing to music alone in her bedroom. She applies dark makeup, and, to leave the house, dons a black chador (a full-body, cloak-like garment often worn by Iranian women). That night, as the woman leaves her house again, and returns to the blanket of dark night, we witness her first kill—involving sharp, glistening teeth—and realize she is a vampire.

A Girl Walks Home Alone at Night is an art piece. It is dark and moody, and has a small cast of intriguing characters who intersect in ways you may not expect. The word “sex” appears, written in English, in at least two places in the film, and it seems that sex is a big theme, due to the fact that almost every character has a somewhat sexual role in the film—whether they are selling sex, engaging in sex, or using seduction to find their next victim. In the background of the film, there is a gender nonconforming person who is seen here and there, watching other characters, and, in one scene, dancing with a balloon. Amirpour said of this character, “If there’s one political thing [in the film], it’s not the chador, it’s [this character], because it’s not okay to be gay in Iran.” To this day, homosexuality is illegal in Iran.

As the film progresses, Amirpour expertly ties her characters together in unique relationship bouquets. One night, the vampire meets Arash on the street by accident, and an unlikely, sweet and subtle romance blossoms between the two. Arash is enticed by the woman’s mystery, and puts his trust in her right away. In certain moments, all movement slows, conveying exquisitely the enchantment of new love. The vampire woman shows a naivety with love, like this is new territory for her. It is never clear how she became a vampire or how long she has been one, but her character does not seem to be centuries old, as vampires are often depicted as (e.g., Dracula, 591; Carmilla, 335; and even Edward Cullen, 104). Amirpour’s vampire seems young—newer to the world than you might expect from her type of monster—though she chooses her victims wisely, and gains her audience’s trust and affection by taking on the role of a vigilante of sorts.

In addition to everything already stated about this incredible film, A Girl Walks Home Alone at Night has an epic soundtrack that adds to every scene’s immense intrigue. Even when the camera is still, and the characters move slowly in time, the music and each scene’s visual beauty won’t allow for boredom. At only 1 hour and 41 minutes, the film is quite an easy watch, and anyone who appreciates great beauty in darkness, will fall in love with this beautifully dynamic flick.
A Girl Walks Home Alone at Night, 96% on Rotten Tomatoes. Watch now for free on Tubi!

Singing for the Actor with Bill Haller