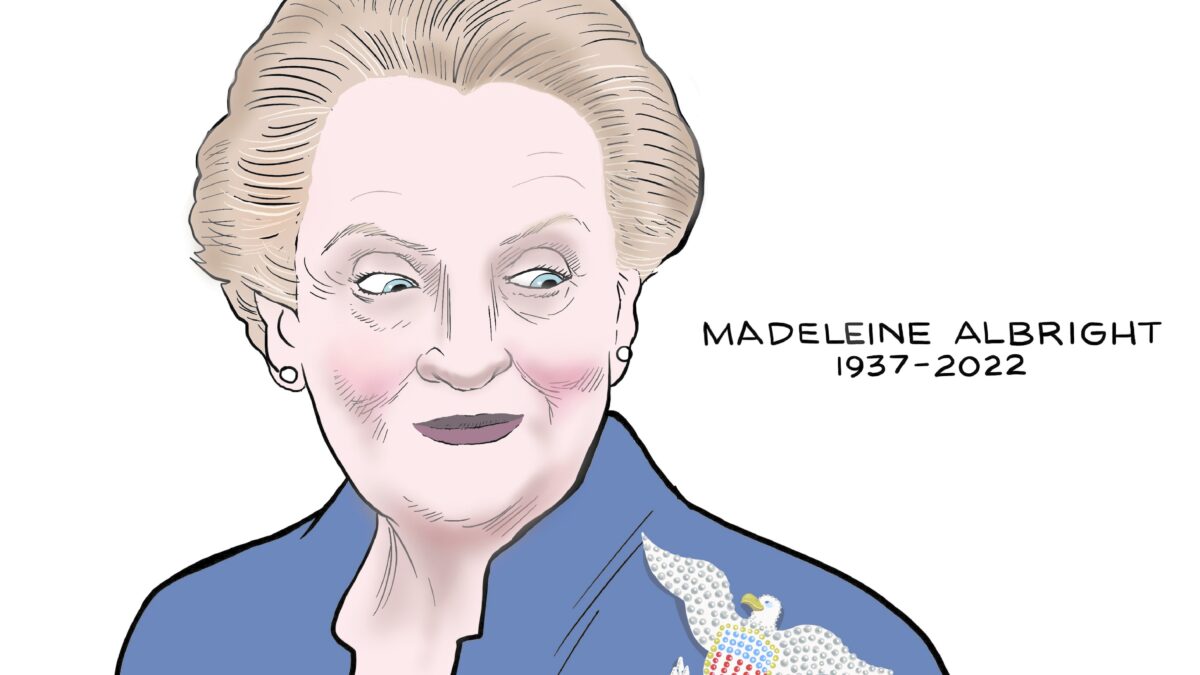 Former US Secretary of State Madeleine Albright died recently, which prompted me to revisit her last book, Fascism: A Warning (2018). Written only a few years into the Age of Trump, Albright draws dark parallels between the emergence of fascism one hundred years ago and what she describes as the “stirrings” of fascism today.*

Through a series of mini-biographies, beginning with Benito Mussolini in the 1920s and Adolph Hitler in the 1930s, Albright portrays fascism as a by-product of the spread of democracy in the last century. Indeed, both Hitler and Mussolini rose to power within constitutional and ostensibly democratic systems.

Unlike other forms of authoritarian governance that promote specific ideologies, there is no one set of beliefs associated with fascism. Rather, Albright investigates fascism as a pathway to authoritarian power deployed by the likes of Hugo Chavez in Venezuela, Recep Tayyip Erdogan in Turkey, Vladimir Putin in Russia, Victor Orbán in Hungary and many more who have exhibited varying degrees of fascist behaviors.

The pattern is clear; fascism takes root when a free people become convinced that the institutions responsible for safeguarding freedom are corrupt. At its core, fascism follows real or perceived grievances and “draws energy from men and women who are upset,” Albright notes, “because of a lost war, a lost job, a memory of humiliation, or a sense that their country is in steep decline.”

“Fascism feeds on social and economic grievances,” she adds, “including the belief that the people over there are receiving better treatment than they deserve while I’m not getting what I’m owed.”

While the blame is often directed towards institutions within the country, fascism’s appeal to national greatness targets immigrants, as well. Foreigners are described as decadent and responsible for national decline. They are painted as threats to national identity and their presence challenges the very nature of the perceived national culture. They are disruptive to social order and, to protect the virtues of the nation, the fascist leader is granted additional authority in order to stave off the threat.

And, while the grievances can take many different forms, their exploitation by fascists follows a blueprint sketched several times during the last century; stoking grievance by specifically clarifying its source, “discrediting…mainstream politicians” for their failure to address the grievance, attacking the free press while promulgating lies and misinformation, and invoking a sense of national greatness. Indeed, a classical tool for the fascist is appealing to a former era in the nation’s history when the impetus for these grievances did not exist.

Albright’s Alarm is that bad actors can manipulate a democratic process and present themselves as saviors. Genuine grievances are grossly exaggerated; creating a divided environment within which new grievances can be fabricated. And all of this is mobilized under the pretense of liberty.

Mussolini did it, Hitler did it, and many around the world are doing it right now; but sometimes it is hard to notice. Fascism doesn’t erupt like a volcano. Rather, it seeps quietly into the fabric of a nation under the protections of the very freedoms it threatens.

Albright cites the reflections of a “well-educated but not politically minded German who experienced the rise of the Third Reich.” He was completely astounded by having been a part of such horror. “Each step,” he recollected, “was so small, so inconsequential [that] one no more saw it developing than a farmer in his field sees the corn growing.”

It becomes clear throughout Albright’s book that she is speaking most certainly about the United States and she says out loud what needs to be said out loud: “The shadow looming over these pages is, of course, that of Donald Trump.”

It would be easy enough to throw sharp rhetorical stones in this moment and Albright attends to this. Unfortunately, the abuses have poured forth with such persistent malice that any criticism levied their way seems only to fuel the fires of division.**

I know this supposition amounts to a rather unsightly condemnation of those who support Donald Trump. The reality, though, is that Trump’s behavior aligns perfectly with the alarms raised in Albright’s book including his continued effort to stoke the thoroughly debunked grievance of a “rigged” election.

Despite her ominous warning, Albright offers a healthy way forward. We can begin our recovery from the “current embarrassment,” she writes, by “purging excess money from politics, improving civic education, defending journalistic independence, adjusting to the changing nature of the workplace, enhancing inter-religious dialogue, and putting a saddle on the bucking bronco we call the internet.”

That’s a lot of work, especially among a population totally ignorant of what not-being-free looks like. Albright knows what it looks like. She fled Czechoslovakia as a young girl when the Germans invaded in 1939. Her family returned after the war only to flee once again as her country was swallowed whole by the Soviet Union.

As refugees, her family took immense pride in the country that had taken them in but “worried,” as her father wrote, “that Americans were so accustomed to liberty…that they might take democracy for granted.”

Madeleine Albright’s Fascism: A Warning paints a clear portrait of exactly what fascism looks like and there is no mistaking it’s growing presence in the modern world.

I may not be able to see the corn growing, but I know from long experience that planted corn, if cared for properly, will certainly grow.

**In 2018, Albright wrote that Trump has “systematically degraded political discourse in the United States, shown an astonishing disregard for facts, libeled his predecessors, threatened to ‘lock up’ political rivals, referred to mainstream journalists as the ‘enemy of the American people,’ spread falsehoods about the integrity of U. S. electoral process, touted mindlessly nationalistic economic and trade policies, vilified immigrants and the countries from which they come, and nurtured a paranoid bigotry toward the followers of one of the world’s foremost religions.” And that was four years ago.