When Will Smith received his slap on the wrist for slapping Chris Rock at the Academy Awards a couple weeks ago, I was reminded of my growing disenchantment with the Academy that was exemplified at last year’s show. See, this paradoxical thing happened. In 2021 they held the ceremony at Union Station, which caused inconveniences for thousands, including but not limited to: removing accessibility from disabled commuters, stopping the free Covid testing site, and displacing homeless people.

Ironically, it was to celebrate Nomadland, a film that honors the human experience of homelessness on wheels.

“Can you get these tents out of here? We have to put down the red carpet there,” is part of the  conversation I imagine must have taken place. It is estimated that thousands of homeless people depend on Union Station for shelter.

I had decided to escape LA for Spring Break and celebrate my scholastic progress with a brief camping trip. I used to joke that camping is practice for homelessness in LA. At the time, I didn’t have a car, so I smartly took advantage of my bicycle and the Amtrak Train. How easy and convenient it was! However, I hadn’t expected that when I boarded the Expo Line five minutes from my apartment, people would assume I was actually homeless. Sure I had a scrappy dog, an overloaded bicycle, and a myriad of bungee cords strapping in a backpack, a tarp, and a sleeping bag, but it didn’t occur to me that I would inadvertently start my voyage as an incognito bum.

In time I noticed one of two things would typically happen: people would dodge me, avoiding eye contact, crossing to the other end of the track, or they would see through me, pretend I wasn’t there, refusing to acknowledge the hilarious struggle I had with a heavy load and wide radius. I caught my reflection in the train window and was reminded my face was covered by cheap sunglasses and a cloth mask. It was impossible to know who was under there. Since I’d experienced years of unwanted flirting from other train commuters, I rather enjoyed playing into the character that people assigned me, and embraced this unplanned undercover operation. Sometimes they’d look at me with pity; or, they’d look at Rufus, with greater compassion, since he couldn’t help that he ended up with such a failure of a person.

When I rolled up to my campground on “the World’s Safest Beach,” the ranger did not give me the friendliest greeting. He warned, “You know you can’t stay here for more than five days. And that’s for the entire year!” I shrugged. “Yeah, I only made a reservation for two days… because I have to get back home.”

He went on to tell me about the first-come-first-served corner of the park, where I guess a lot of transient folks awaited their future. I reiterated I had a space reserved, and proceeded to my site, noting that most of the other plots were filled with fancy RVs and retired couples in their 70s. A few gave me confused glances as I waved past them. Eventually one woman asked: “Are you here all by yourself? Gee that’s brave.” I just diverted the conversation to Rufus, “I’m here with this lil’ buddy.” And Rufus did what he does so well, steal the focus, inspire smiles, and give me an excuse to keep moving.

Returning on the Amtrak, I was two days dirtier, and my belongings were splotched with campfire ash. Just before I boarded, I had to reattach my bike chain, so there was black grease all over my hands and underneath my fingernails. Clearly I was still in character. On the train, I stood in the car designated for bikes, and the attendant told me I could sit on the floor since there were no seats available in that car. She didn’t even ask to verify my ticket, which I was ready to show. She just saw Rufus, tired and panting and invited us to get comfortable on the floor for the whole ride.

Back in Union Station, I saw an entire wing had been blocked off in preparation for the Oscars ceremony and wondered how it could be safe in an emergency to block off all of those exits…

A transgender transient pushing a grocery cart with an amp blasting club mixes noticed my confusion as I navigated the station.

“Sweetie, the free meals are on the other corner today, the church ain’t doing it today.”

I didn’t want to shame her so I thanked her.

In the elevator a scruffy guy with a gravel voice remarked, “Y’know a few years ago I was in a very similar situation. But I’ll say if you leave California, it’s a lot easier, and then you can build yourself up and come back. That’s what I had to do and y’know what, I have an apartment now.”

Again, I didn’t want to insult him by correcting his assumption, so I told him I appreciated his support.

As I waited for the metro Friday night returning home, travel-worn and tired, I noticed the lack of patience commuters had for me as I struggled pushing a heavy, dusty, overloaded bicycle. I was angered by their disregard of my humanity; whether they were comfortable with it or not, we were sharing space. At the track I witnessed the growing number of homeless people shifting about, planning a place to land… some having as little as a sweater and a hospital bracelet.

It occurred to me that if the funds spent on awards show gift bags were distributed instead to feeding, housing, clothing, or educating people, what impact that might have. I felt thankful for my heavy, awkward baggage because I knew I had everything with me for basic comfort. Soon I’d be safe in my apartment and blessed with a hot shower.

How quickly I had become invisible to most of the regular commuters. Yet on the flipside, I was instantly embraced by the others, the many who saw me as one of them. They shared resources, intel, and nodded respectfully as if we were all tethered to the same family.  There was more connection with them than I experience with strangers in regular life on a daily basis.

What Nomadland did show was the beauty and safety in community and spaces where people can embrace living off the grid or in non-conformity home situations.

There are so many peaceful possibilities, but it’s easier for MSM or social media commentary to stick to celebrity feuds or political theater. At the Academy Awards, there is a podium and microphone being used to self-congratulate instead of collaborating for good. What would happen if  those with power were to listen for a change? 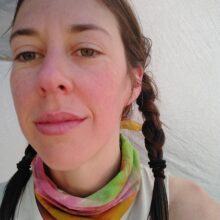 Lauren Michaels, originally from Dayton, OH, is a stand-up comedienne, actor, and writer who performs across Los Angeles venues. Classically trained at NYU’s Tisch School of the Arts, she found her comedy footing at The Second City. She enjoys diving deep into her hobbies and is currently exploring bicycle mechanics. Lauren leads a production company called Sweet Relish Films, and is embarking on a new entrepreneurial experiment, Jest a Suggestion, where she teaches communication skills via improvisation to non-actor professionals.