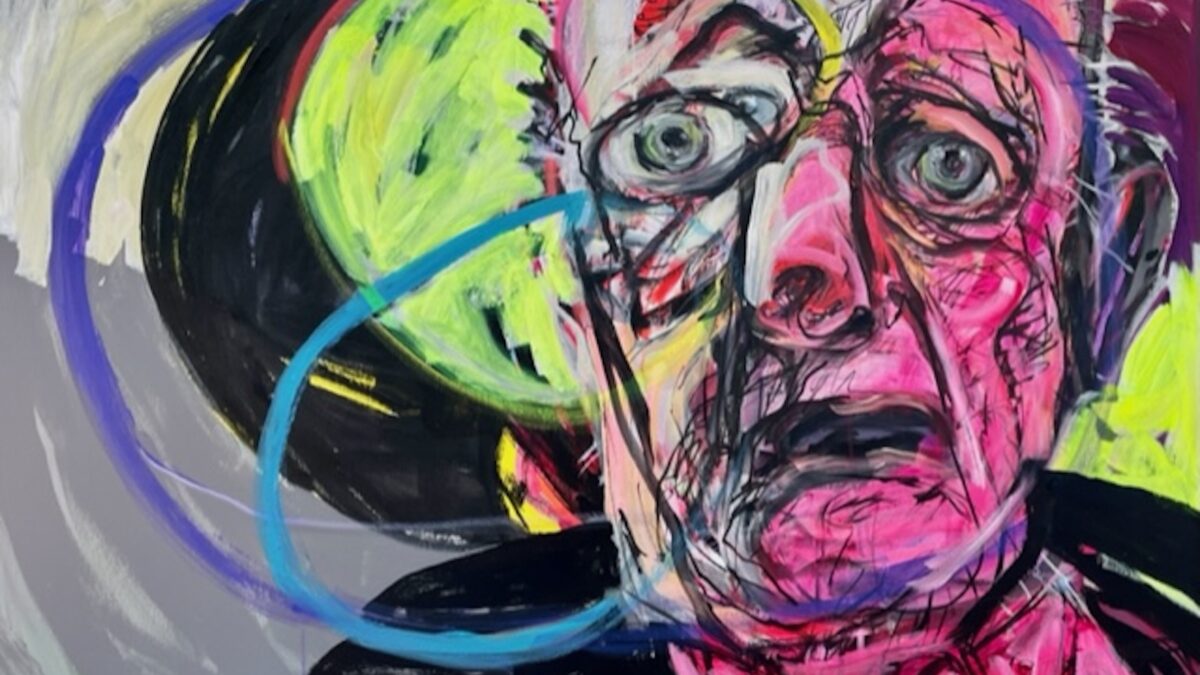 Looking Into the Void.
Feature

Topanga artist and art teacher Joe Blaustein is turning 99 this year. A new retrospective on Joe’s work opens on May 11 at TAG Gallery on Wilshire. The title of the show is, appropriately, No Hesitation. It celebrates a life lived to the fullest.

Joe may be almost 100, but his mind is still razor sharp, and he radiates a joyous and indomitable spirit, despite facing serious health challenges. He is not able to paint any more but he still teaches, and he still loves to learn, sharing his explorations into the work of emerging artists worldwide with the artists he mentors. “I realized I had a gift for seeing the possible, and encouraging it,” he says.

In order to keep teaching during the coronavirus crisis Joe adapted to teaching via Zoom, instead of in person.

“Teaching on computers is completely crazy,” he says, adding that although he misses the opportunity to walk around and give individual input, the switch has brought benefits, including an opportunity to reconnect with old students. The current class includes participants from as far afield as New York and Portugal. They meet twice a week online for life drawing sessions and discussions on art history and the current art scene.

Joe’s nearly 100-year adventure began in New York City. He and his three sisters were the children of Eastern European Jewish immigrants, who left the hardships of life in a Ukrainian shtetl—one of the small Ashkenazi communities that would be decimated during the Holocaust—to come to America. They achieved success in their new home through hard work and determination.

“My father never talked about it,” Joe recalls. “He had no education. No books or music. I never saw my mother read. I’m not sure if she could. I was the first in our family to go to college.”

Joe left college to join the Navy after Pearl Harbor. “I didn’t tell my parents,” he recalls. “I couldn’t.” He served aboard the Destroyer USS Black (DD-666), as a second lieutenant, an assignment so hazardous that he received double pay for what was regarded as “suicide duty”.

His wartime experiences included witnessing a kamikaze attack on the nearby USS Kidd on April 11, 1945. 38 sailors were killed instantly, 55 were wounded—men Joe and his shipmates knew well from shared leave and shared service. “We couldn’t do anything except watch,” Joe says. It’s something that still haunts him.

The USS Black returned home with General MacArthur. Joe completed his degree at Bucknell University in Pennsylvania and went on to a long and successful career in retail advertising during the height of mid-century, the time captured in the series Mad Men. He became the vice president of a high profile company and was influential in increasing representation in advertising, but he dismisses those 30 years as not relevant to his life as an artist. “It was BS,” he says.

Joe had an early marriage that didn’t last but provided one lasting blessing, a daughter. “We married too young,” he says. He met the love of his life later, during his advertising career in Los Angeles. Joe and his second wife Paula had three children together. When she was pregnant with their second child, Paula was ordered to have strict bed rest by her doctor, but an opportunity arose for the couple to have an audience with the Pope.

Joe and Paula seized the moment and flew to Rome. Neither of them were particularly religious, Joe explains, but it was an opportunity that they simply could not miss.

The trip took them to Florence at the time of the great flood in 1966. Joe took two rolls of slide film with a Rollei twin-lens reflex camera. Today, they are the only color photos in existence documenting the aftermath of the disaster, preserving an important record of a dramatic moment in Florence’s storied history.

Many years later, Joe donated them to the city of Florence, where they were featured in an exhibition in 2013 and later published in a book, The Colors of the Flood: Past, Present and Future Through the Unpublished Color Pictures. His experience is also the subject of a recent documentary, Joe Blaustein and the Flood of Florence.

Paula’s pregnancy was not affected by the trip. Their second child was healthy and was followed by a third, but Paula’s time with Joe would end too soon. She died of breast cancer in her 40s. The loss was shattering. Joe walked away from his advertising career, throwing his energy into painting and teaching studio art. Painting became a way to process grief, and enabled Joe to remake his life.

“I always drew, but I never took studio art in school,” Joe says. “They didn’t teach it. I didn’t have an MFA, and I was never tenured, never a professor, but I taught through UCLA’s extension program from the beginning until just a few years ago.”

The friendships Joe has made in more than 70 years of teaching continue to sustain him and bring him joy.

When he could no longer paint, an old student encouraged him to write, a different art form but one that the artist has embraced with enthusiasm.

Joe didn’t want to talk about his own work during the interview. Like his years in advertising, it was in the past, not as important to him as his work as a teacher and mentor, but artist Elyse Wyman, co-curator of the upcoming retrospective, describes it as “fearless”

“Looking at his paintings you are transported to a visceral world where mark making is immediate, passionate, and emotional,” she says

For Joe, it’s the teaching that matters. “The time I’ve spent teaching is 90 percent the most important part of my life,” Joe says. “Teaching enriches my life.”

NO HESITATION: THE ART OF JOE BLAUSTEIN, May 11 to June 4, 2022 at TAG Gallery, 5458 Wilshire Blvd., Los Angeles, CA 9003. A reception for the artist is scheduled for May 14, 5-9 p.m. A companion show, “Hangin’ With Joe”, features works by Joe’s students. A screening of Joe Blaustein and the Flood of Florence will take place Saturday, May 21, 7-9 PM at TAG. For more information, visit www.taggallery.net

Tags #Holocaust #Joe Blaustein #Joe Blaustein and the Flood of Florence #Los Angeles #Present and Future Through the Unpublished Color Pictures #TAG Gallery #The Colors of the Flood: Past #Topanga #Wilshire
Feature

The Future Will Be Better Than You Think