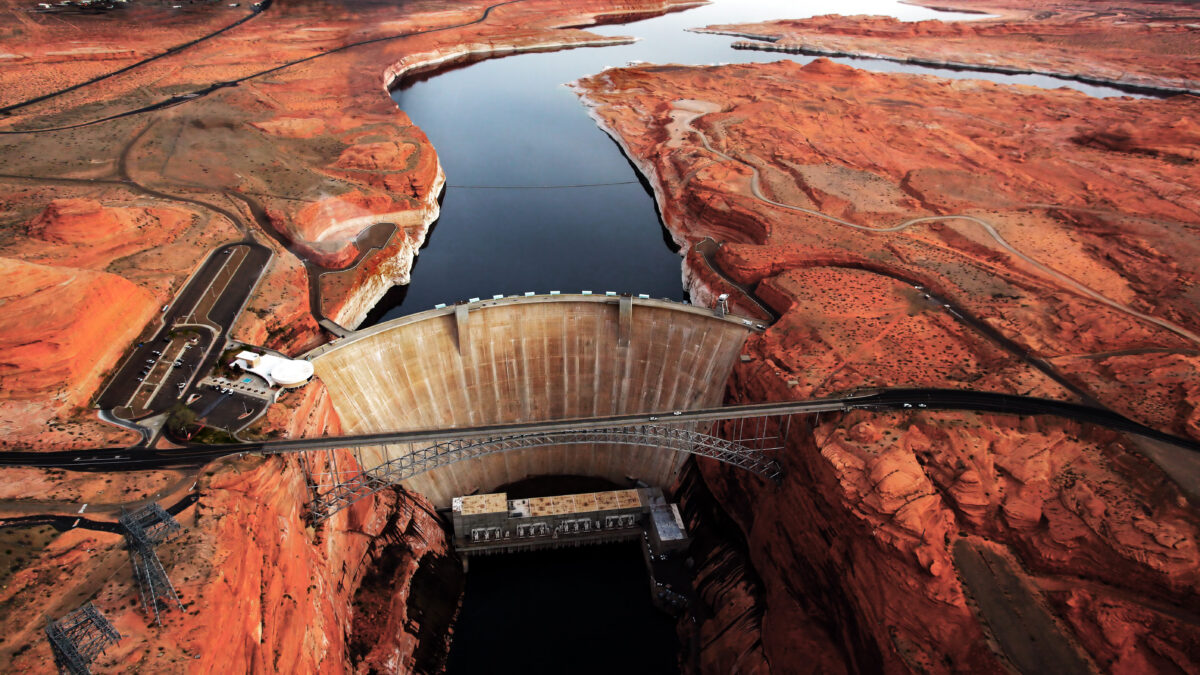 An aerial view of Glen Canyon Dam. This massive dam was built over the Colorado River resulting in the creation of Lake Powell. Photo by Shuvro Ghose
Books & Such

There are over 91,000 dams impeding the waterways of the United States.

During much of the twentieth century, dams were built in just about every location where a dam could be built. The question, should a dam be built? was often answered by engineers eager to build, politicians eager to swap pork barrel projects with one another, and large-scale farmers suckling at the water-teat of the American corporate welfare state.

It should be said that some of this rather harsh criticism is probably more properly directed to the scores of massive dam projects—my word for dams over 300 feet tall—with prominent names such as Hoover, Oroville, and Glen Canyon; and the roughly 8000 major dams—imagine these as over 50 feet tall. Lesser known, or perhaps even unknown, are the tens of thousands of other smaller structures which, collectively, harness the flow of water throughout the country; to the benefit of the few and to the detriment of the environment and thus, the quality of life for the many.

All things considered, many of these dams simply should not have been built and, today, many others have outlived their usefulness. Whether necessary or not, all of these structures – large and small – have dramatically altered the geography of this country, radically transformed freshwater environments, and in some cases, now pose a physical threat to human communities living near aged and neglected dams.

Enter American Rivers, the premier river conservation organization in the United States, which has, since 1973, been dedicated to restoring the country’s rivers and freshwater ecosystems. While much of their effort is directed at shaping local, state, and national policies toward rivers, a visit to americanrivers.org highlights individual activists and enthusiasts solving problems by encouraging a grassroots approach to address very present and visible local water problems.

And since 1999, one of the organization’s primary objectives is to support the removal of dams where benefits no longer justify their existence; and whose removal promotes the restoration of healthy, free-flowing rivers and the habitats they support, including our own.

In a February 2022 report issued by American Rivers, Free Rivers: The State of Dam Removal in the United States, vague language indicates that the scope of the problems presented by so many dams is not yet known. For instance, “it is estimated that roughly 85 percent [of dams] are older than 50 years.” It also reads that “[m]any, perhaps most of these aging dams no longer serve their original purpose and are not being maintained.”

Someone along the way seems to have recognized that keeping track of tens of thousands of dams might be a good idea. The U.S. Army Corps of Engineers—responsible for the construction of many of the country’s dams—has developed the National Inventory of Dams database. Unfortunately, their count actively excludes the “vast number of largely low-head dams” and further, “acknowledges that data” within the NID “is limited by what can be gathered and analyzed with available funding.”

For example, in New England of 2015, one study revealed the existence of over 14,000 dams in an area where the NID listed only 4000. In another measure, “44,815 dams [were counted] in the nine states that comprise the Great Plains and Intermountain West alone, far more than the number found in the NID.”

This is exactly what you get as the dam-building craze of the twentieth century forged ahead on a political freight train loaded with pork and unencumbered with concerns over environmental degradation and economic infeasibility.

As the Free Rivers report reads, “Many dams serve an important purpose and should remain in place. However, there are tens of thousands of outdated, obsolete dams nationwide whose impacts to ecology or public safety outweigh the benefits they provide.”

Further supporting the effort to evaluate and remove dams is that “society has developed ways to address many of these needs without dams. For instance, flood control can often be accomplished more effectively and at a lower cost by restoring wetlands, maintaining riparian buffers, setting back levees or moving people out of the floodplain.” And, modernizing “antiquated irrigation systems and replacing inappropriate crops can dramatically reduce the need for dams and reservoirs in the arid West.”

Hydropower dams were promoted as sources of clean energy that powered the twentieth century. Indeed, as Marc Reisner points out in Cadillac Desert—the focus of “Dam I”, TNT May 6, 2022—“American hydroelectric capacity” facilitated the massive manufacture of arms during World War II. “We didn’t so much outmaneuver, outman, or outfight the Axis,” Reisner adds, “as simply outproduce it.”

Nonetheless, we should evaluate dams in light of current needs and practicalities.

For instance, hydropower-generating dams are not necessarily as “green” as they were promoted to be. Besides the obvious disruption to rivers and river habitats, impeding water in reservoirs leads to a buildup of chemicals and nutrients from agricultural and industrial runoff. Algal blooms form, and then die when the oxygen is depleted. Reservoirs then become sources of methane, “a greenhouse gas that is 25 times more impactful than carbon over the first 100 years.”

The larger point is that, even among those dams that have served a practical purpose, today’s realities demand that we consider their usefulness in terms of modern problems and technologies. “Rather than plugging rivers with multiple hydropower dams,” American Rivers reports, “a cheaper and less environmentally harmful solution is to use existing energy efficiency technologies.”

Dr. Jeremy Giovando, a water resources engineer who studies water issues in the Mountain West, offers some context for the current crises. While our ability to manage water issues has “improved since 1986 [the publication year of Cadillac Desert] many… other environmental issues persist.” Notably, “changes in climate are accelerating so quickly that by the time we propose a solution to a specific problem, the underlying assumptions have already changed.”

Given the “complexity” of the problems and the failure of national efforts to implement comprehensive reforms in a number of areas related to climate change, water quality, and water shortages, perhaps it is time to accept that a large-scale institutional approach to the problems we face is not going to happen anytime soon.

While this is discouraging news for those seeking broad-based solutions at the national and international level, this hard reality puts even more pressure on local communities to solve local water problems. The challenge is educating and supporting people to address their immediate and present situation in a manner that moves the needle, if only a bit, in the direction of climate-wise outcomes.

The removal of Edwards Dam on Maine’s Kennebec River in 1999 illustrates how local activity can improve local conditions while educating and influencing national leaders. American Rivers and other conservation organizations convinced the federal government to remove the dam and restore much of the river.

Free Rivers describes the removal of Edwards Dam as a “turning point” as “it was the first time the Federal Energy Commission… determined that the ecological, economic and community benefits of a free-flowing river outweighed the benefit of a limited amount of hydropower production…” Indeed, the act of refusing to renew the dam owner’s license established the precedent that the federal government can now “remove dams that do more harm than good.”

The Kennebec River has been partly restored. Water quality has improved. Spawning fish have returned to habitats that had been blocked by the dam. Other wildlife and vegetation flourish in and along the river. People enjoy safe recreation including strolling down “a wooded riverfront nature trail.”

Thankfully, American Rivers now maintains a database on U.S. dam removals and the numbers are encouraging. “1951 dams have already been removed nationwide,” and the reasoning behind the removals has been backed up by science, data, and community input.

This may be the overriding positive influence of American Rivers; we must thoroughly evaluate—and count, for goodness sake—the dams in our country as they stand today, in light of current problems, modern technology, and in deference to the impending challenges posed by a warming planet.

As Dr. Giovando says of dam construction and removal, “benefits are based on priorities at the time the project is built.” Unfortunately, many of the tens of thousands of dams blocking waterways today were often proposed without giving much consideration to environmental impact, nor to the long-term consequences of transforming the landscape.

Today’s priorities have shifted. Unlike the “priorities” that guided dam construction in the twentieth century, dam evaluation practices now include recognition of environmental impacts and a deepening awareness that ecosystem health is tied directly to human health and environmental sustainability.

And, if all this sounds like dreamy language uttered by a lefty tree-hugger, think again. The Infrastructure Investment and Jobs Act of 2021 “includes $2.4 billion for the removal, retrofit and rehabilitation of dams.” In the Senate, the bill passed by a vote of 69 to 30. Most remarkable, and hopeful, is that the passage of this law amounts to “acknowledging free-flowing rivers as infrastructure, vital to local economies, public safety and quality of life [while] addressing the interconnected challenges of climate change, injustice and biodiversity loss.”

The results of American Rivers’ dam removal program are encouraging. By taking a more holistic approach, communities are discovering that dam removal and habitat restoration have economic advantages that go far beyond the aesthetic and spiritual benefits derived from spending time on or near free-flowing rivers. “A healthy river,” American Rivers argues, “can increase property values, boost recreational opportunities, attract tourists, reduce water pollution, and protect people and property from flooding.” Driven largely through local efforts with outside support and guidance from organizations like American Rivers, “communities are taking a second look at the benefits and impacts of dams” and “many are deciding that removal is the best option…”

Americanrivers.org contains vast resources to confront local problems, dozens of beautiful films, access to the podcast series “We are Rivers: Conversations about the Rivers that Connect Us,” many enlightening reports including “America’s Most Endangered Rivers® of 2022,” other work on climate change and clean water, opportunities to get involved and, of course, a little button to enter your credit card information.**

**Topping their list of America’s Most Endangered Rivers® of 2022 is the Colorado River. And, as a weird affirmation that twentieth century American water policies have a sense of permanence, number nine on the list is the Los Angeles River, despite the fact that much of its riverbed is concrete.