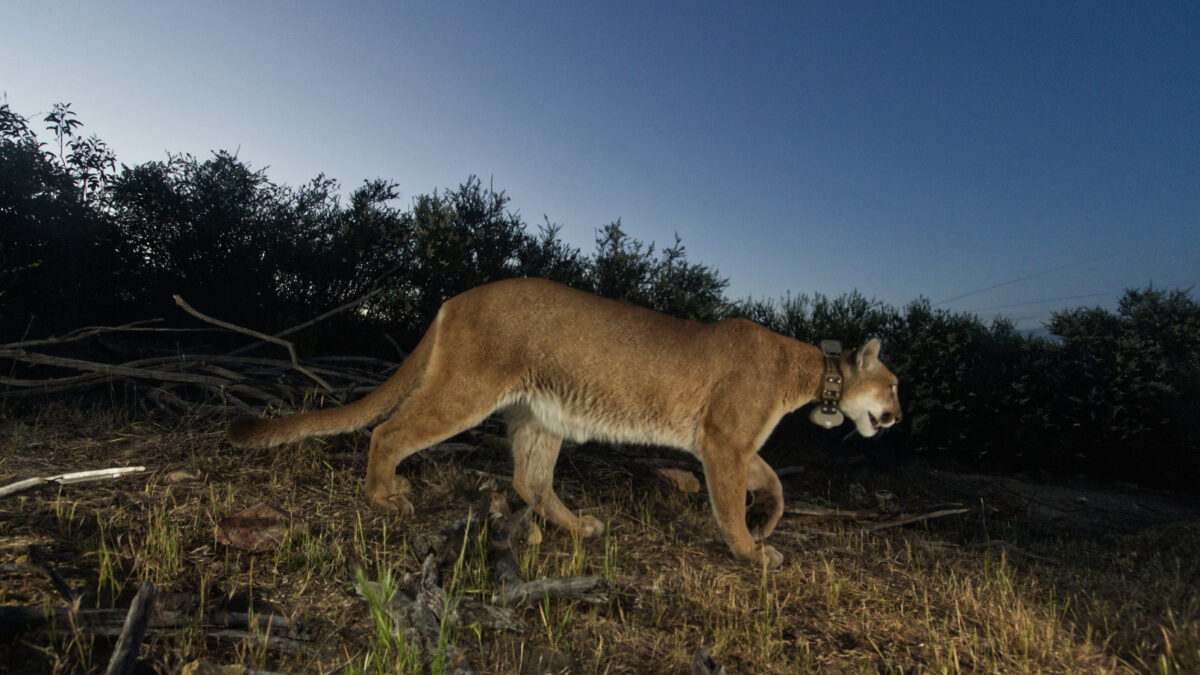 Adult female mountain lion P-65 is the first mountain lion in a two-decade-long National Park Service (NPS) research study to have died of complications from notoedric mange, a highly contagious skin disease caused by a mite parasite. P-65 was found dead by biologists on March 4, 2022, near a stream in the central Santa Monica Mountains, where she lived. She was estimated to be around five years of age.

Her case of mange was severe, evidenced by hair loss and skin encrustation, especially on her face and head. She was also extremely emaciated. After death, she was taken to the California Animal Health and Food Safety Lab (CAHFS) for a full necropsy and testing. Toxicological tests revealed that she was exposed to five different anticoagulant rodenticides, also known as rat poisons, and to bromethalin, a neurotoxic rodenticide.

“We’ve had several radio-collared mountain lions that have contracted mange in the past, although in previous cases we were able to treat them with a topical anti-parasitic medicine,” said Jeff Sikich, a wildlife biologist with the park who leads the fieldwork on the mountain lion project. “All of these animals recovered from their mange disease as best as we could tell from remote camera photos or later examination. However, in P-65’s case, we did not know about her disease until after she had died.”

Notoedric mange is a skin disease resulting from infection by mites in the genus Notoedres which affects wild cats such as bobcats and mountain lions, as well as other wildlife species including squirrels and rabbits. Through long-term NPS research on bobcats in the Santa Monica Mountains and Simi Hills, notoedric mange was found to be a major source of mortality since it was first documented in late 2001.

Biologists say that P-65 was an interesting cat to study. She was first captured and collared in the central portion of the Santa Monica Mountains in March 2018. She survived the Woolsey Fire in November 2018, and based on her GPS locations, her home range was found to be entirely within the overall burn perimeter, although during this time she largely used the southeast corner of the burn where there were some sizable, unburned islands.

In August 2019, P-65 became the second radio-collared female mountain lion to cross the 101 Freeway in the study’s history. She moved northward into the Simi Hills from the Liberty Canyon area of Agoura Hills, where the Wallis Annenberg Wildlife Crossing is currently under construction.

In the summer of 2020, P-65 gave birth to a litter of three kittens, P-88, P-89, and P-90. Unfortunately, P-89 and P-90 (the two remaining of the litter) were killed this year on local roads. This was after they were both treated for mange last year, and seemed to have recovered.

It’s important to remember that rodenticides and other poisons kill more than rodents. Please refrain from polluting our mountains with such dangerous chemicals.