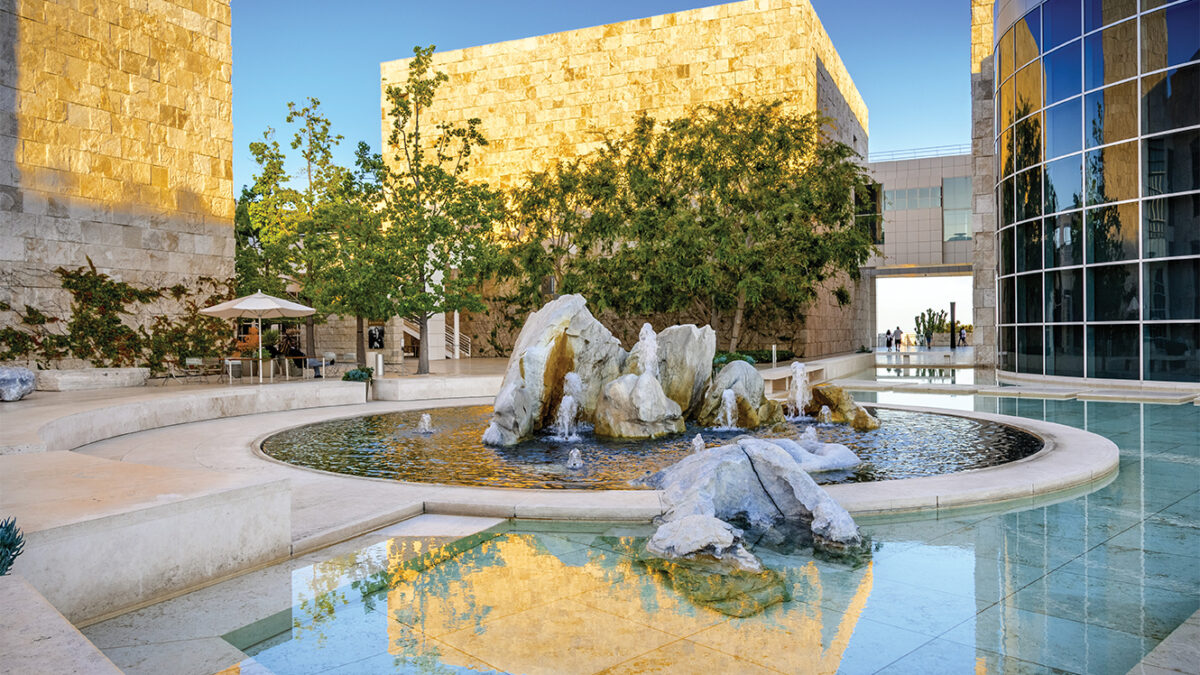 Water fountain in the museum courtyard of the Getty Center at sunset; travertine covered wall, illuminated by the sun, reflected in the fountain’s pool. Photo by Sundry Photography
ArtBeat, Engage

Watching the sunset from the Getty Center garden after a leisurely day of art and afternoon tea, a visit with the dignitaries in the Huntington Museum’s portrait gallery, and Friday night films at LACMA are all Los Angeles summer pleasures that are on hold during the coronavirus crisis, but area museums large and small are working to make resources available online, bringing art treasures and programs into people’s homes. It’s a welcome diversion.

The Getty wins the prize for access, with a huge library of art objects from the Getty Center and the Getty Villa that can be viewed in detail online or downloaded for any creative project; videos on everything from the making of illuminated manuscripts, to how medieval tapestries were woven, and how an Egyptian mummy was mummified. Audio tours from past exhibits and more than 100,000 digitized art books and documents for readers and researchers are also available.

Families can participate in craft activities that include making a paper crown and baking a loaf of Roman bread. Tune in every Sunday at 3 p.m. through August 16, for the latest episode of an ongoing live, inventive, and humorous theater presentation of Homer’s Odyssey—or in this case Odd-yssey, performed via Zoom by the Troubadour Theater Company.

General information on the Getty and links to online programs and resources can be found at www.getty.edu

The Norton Simon Museum also offers extensive online resources that include podcasts, lectures on and by artists, videos on art conservation and creation, and a selection of children’s crafts.

We were charmed by a simple paper craft inspired by Paul Klee’s “Aquarium Green-Red” (1921), and a printmaking project based on nature drawings created by Ellsworth Kelly.

The Norton Simon’s Museum from Home project also includes a series of beautiful and calming meditation videos inspired by artwork in the museum. This was an unexpected delight. Visit , and

LACMA—the Los Angeles County Museum of Art—is still in the process of developing at-home programming, but the museum’s website already features several craft and art activities as part of its Make Art at Home with LACMA’s Teaching Artists series. LACMA also offers free courses, including an introduction to Chinese painting and a series on art and social justice.

Things are buzzing at the Natural History Museum of Los Angeles, with a summer online display of insects of L.A. that is accompanied by a hands-on collect-and-observe activity for citizen scientists of all ages. Many objects from NHM’s extensive collections can be viewed online, but the interface is geared more for researchers than families.

Many of the smaller museums in L.A. don’t have the resources to create extensive online programming, but they are still worth a virtual visit.

USC’s Pacific Asia Museum has a selection of art objects and past exhibits.

The UCLA Fowler is featuring Friday night talks and workshops that range from serious to surprising. On Friday, July 31, from 5-6 p.m., the guest will be Guerrilla Tacos Chef de Cuisine Steve Londono, who will demonstrate how to make his famous Cauliflower Tacos with Molcajete Salsa.

Most new exhibits are on hold, but the Huntington just unveiled a new site-specific artwork by Lita Albuquerque, not in the art museum but in the botanical gardens.

“Red Earth,” was originally scheduled to go on view in March; it was unveiled instead on July 1.

The temporary installation features a massive three-ton boulder, its natural colors enhanced with vivid red pigment. The stone is set in a grove of bamboo in the Japanese Garden. The artist attached copper bands to the bamboo that catch the light.

There is a ceremonial formality in the installation that suggests the dignity of ancient neolithic monoliths. The red pigment—a modern take on the red ochre revered by humanity’s earliest artists, imbues the work with a spiritual gravitas, but it also has an ephemeral playfulness, with the bright copper glinting amongst the leaves overhead.

“[ It is] a stand-in for what I am hoping the visitor to feel, a sense of calm in the midst of chaos,” Albuquerque said. “2020 is the year of perfect vision. We are in a time of expanded perception where we are shifting from a perspective that is human, to one of the human in the cosmos. I have placed ‘Red Earth’ in this intimate setting, in the heart of the bamboo grove of the Japanese Garden at the Huntington, to represent the earth—the heart even—of the planet in its stillness. The copper rings around the bamboo are flickering lights in constant motion, dancing with sunlight and wind. It is through that stillness that we can discover the motion of the cosmos and our place within it.”

Albuquerque, who lost her Malibu studio in the 2018 Woolsey Fire, and who had this major work delayed by the coronavirus, offers “Red Earth” as a meditation, an anchor of stillness in a frantically kinetic world.

“‘Red Earth’ slows down the present to intensify the time that is passing,” she said. “Where the boulder sits is where the stillness of the human lives.”

“Red Earth” is on display through November 2. To learn more and to watch a video walk-through of the installation, visit, https://www.huntington.org/red-earth

This is a challenging time for Los Angeles’ museums, but the art, history, and knowledge they house is still available and can still inspire, sometimes in unexpected ways.