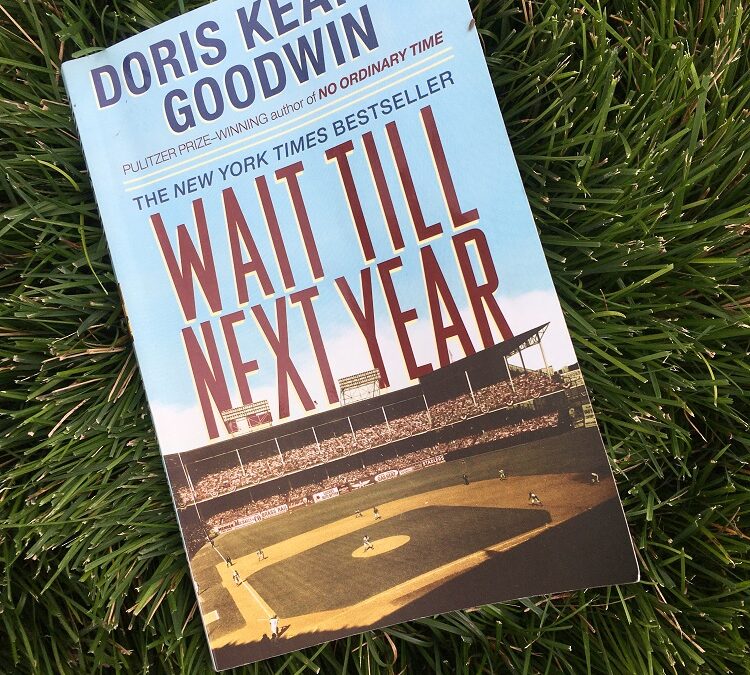 Although published in 1997, historian Doris Kearns Goodwin’s Wait Till Next Year resonates during this long, hot, isolative summer. It is at heart a book about a young girl, her neighborhood, and the cultural force of baseball. A coming-of-age memoir centered on what once was America’s pastime, Goodwin’s narrative also offers a precocious child’s-eye view of a country transformed by World War II.

The story revolves around the rhythms of seven seasons of Brooklyn Dodgers baseball (1949-1955) as they face off against their in-town rivals the New York Giants and the New York Yankees during an era when these teams were among the best in Major League Baseball. It also confronts, in pure Goodwinian style, the troubles of the day.

Indeed, while the Dodgers – Dem Bums – serve as the backdrop for Goodwin’s take on 1950s white working class suburbia, she also explores an America on the cusp of change; including the nation’s effort to manage a burgeoning Cold War, the domestic challenges posed during the McCarthy era, the early rumblings of the Civil Rights Movement and—driving home the urgency of it all—the advent of television.

The reader comes away from this one with a clear understanding of the guiding forces behind Goodwin’s extensive work as a historian. Goodwin was six years old in 1949. Her father gave her a baseball scorebook and the lessons necessary to track the play-by-play on the radio with such detail that the progression of the game could be recounted later; as she often did for her father. Retelling Dodger games “would instill in me an early awareness of the power of narrative,” Goodwin writes, “which would introduce a lifetime of storytelling, fueled by the naïve confidence that others would find me as entertaining as my father did.”

That “naïve confidence” has given rise to one of the country’s premier presidential historians whose charm, wit, grace, and gender defy what we conjure when we picture “historian.”

While producing a school report on Franklin Roosevelt, it occurred to Goodwin that the artifacts of a life and the records left behind could be gathered to tell a story. “From something as simple as the small red scorebook in which I inscribed the narrative of a ball game,” Goodwin reflects, “I saw the inception of what has become my life’s work as a historian.”

By the way, she studied FDR in the third grade and, if you know anything of her work, she never really quit. Indeed, her most recent book, Leadership in Turbulent Times (2018), features four presidents, Lincoln, the two Roosevelts, and Lyndon Johnson, whom she affectionately refers to as “my guys.”

Even as a child, Doris Kearns took full measure of the world around her. For instance, she saw straight through the demagoguery of Senator Joe McCarthy and his attacks on American institutions.

“A growing revulsion was fed,” she recalls, “not simply by the absurdity of [McCarthy’s] attack on the patriotism of the U.S. Army, but through television’s pitiless daily exposure of his coarsely abusive manner and his reckless disregard for the facts.” (If this sounds familiar, take hope in the knowledge that history has a way of taking care of fools like Joe McCarthy.)

In this memoir of her youth, Goodwin acknowledges that her perspective was shaped and therefore limited by societal norms which afforded the people of her neighborhood unprecedented access to the fruits of a booming economy.

“Critics have railed against the acquisitiveness of the fifties generation,” she says in defense, “but for our parents, who had lived through the Depression… they took nothing for granted, and approached each major purchase with a sense of awe.”

At the same time, Goodwin was introduced to the notion that not all neighborhoods were the same and that America was a work in progress. Her favorite teacher implanted an idealism that pulsates throughout Goodwin’s decades of work. “[Miss Austin] was deeply committed to civil rights and social justice,” she pronounces, “[and] implored us to know what was happening around us and to take an active part in political affairs.”

Assisting Miss Austin in forging a sense of citizenship in Goodwin’s life was the presence of Jackie Robinson in a Brooklyn Dodgers uniform. Two years before Goodwin received her first baseball scorebook, Robinson had broken Major League Baseball’s color line. Unsurprisingly, he was Doris’ favorite player.

As a message to all of us now, Goodwin shares some Brooklyn Dodger lore. When Robinson was being hammered with insults and racial epithets as the Dodgers visited Cincinnati in 1947, Dodger teammate Pee Wee Reese, a Southerner from Kentucky, walked across the field and embraced Robinson, quieting the unruly crowd. There is some doubt as to whether the event occurred exactly as remembered, while it is clear that the story captures the spirit of goodwill that balanced much of the racial animus directed at Robinson (there is also no doubt that in 1955, led by Reese and Robinson, the Dodgers finally won their first World Series, putting to rest the title of Goodwin’s book).

And, as the country continues to struggle with these same issues, Goodwin offers wise and refreshing commentary. Despite the presence of injustice, “I was still a patriotic American,” she writes. “But thanks to teachers of uncommon skill and breadth, patriotism would never again mean unthinking adherence to things as they were. I would not confuse the temporary leaders of a country with the country itself.”

In the end, Wait Till Next Year is a baseball book. However, in an age when the American experience was fashioned and tempered by the national pastime, a book about baseball cannot help but be a book about America.

Now that we are in the middle of a blistering summer without it, and hopelessly divided at that, reading Doris Kearns Goodwin’s baseball tale gives us the opportunity to re-imagine the value of shared national experiences. And, while it doesn’t seem as if 2020 will see us through the current mess, her book offers the hope that maybe all we need do is wait till next year.