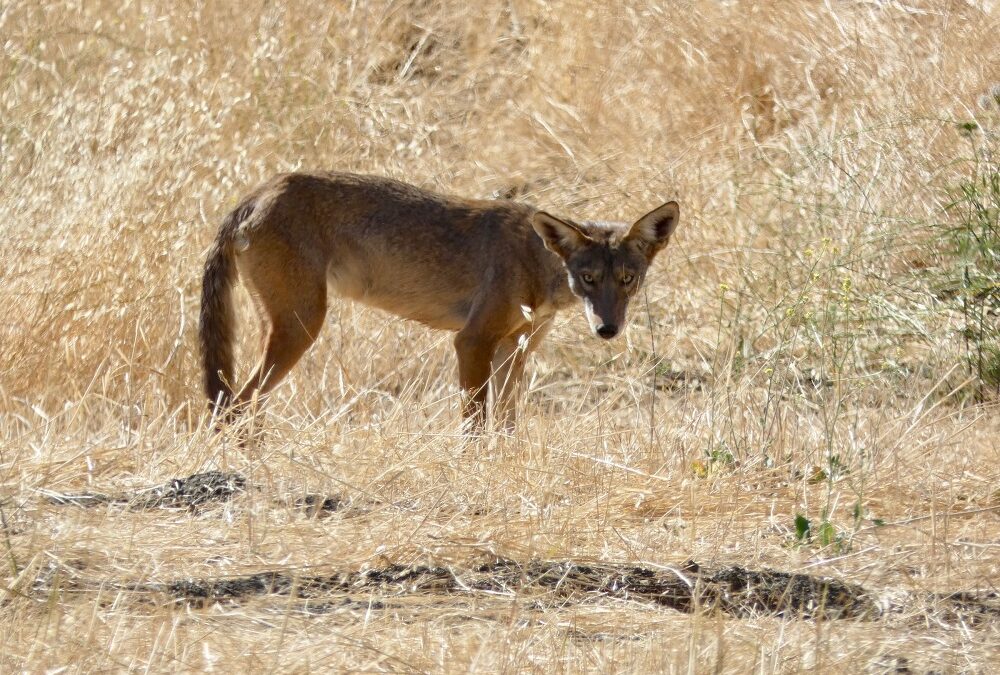 The coyote was a trickster spirit for the Chumash and Tongva people who were the first human residents of the Santa Monica Mountains. This intelligent and adaptable wild member of the dog family is frequently misunderstood and sometimes demonized, but continues to thrive, using those same skills that earned the coyote its place among the Sky People of the first Californians.

Coyotes are adaptable and resilient, and they have used those qualities to learn to live alongside humans.

Many people never see their wild canine neighbors, but they’ve heard them. In winter, when coyotes mate and den, their musical and eerie vocalizations are a familiar part of the night noise but they are less likely to be seen. Ample food and water enable them to avoid encounters with humans.

In the summer, when water sources dry up and prey becomes scarce, they are more likely to be seen—sneaking a drink from a backyard pool, foraging for apples or figs in the garden, or hunting for gophers in an empty lot.

Topanga’s social media channels have been buzzing with reports of bold coyotes this month. The uptick in sightings is often seasonal, but this year there may be another factor: more people are staying home due to the coronavirus crisis, giving them an opportunity to see what goes on during the day when they would otherwise be at work or school. Many people are also spending more time in their gardens, and coyotes are experts at gatecrashing picnics, attracted to sandwich crusts, apple cores, cookie crumbs and even the grease left on BBQ grills.

The National Park Service has been studying the coyote population of the Santa Monica Mountains for two decades.

According to NPS research, coyotes in the less urbanized parts of the Santa Monica Mountains eat fruit, rabbits, woodrats, pocket gophers, voles, squirrels, other small mammals, reptiles, birds, insects, deer and trash. Domestic animals make up less than one percent of the coyotes’ diet in the wildland interface, although that number is higher in more urban areas.

The Coyote Project is a non-profit that advocates for coyotes and promotes coexistence.

“We believe coyotes are a vital component of rural and urban communities, deserving of respect for their adaptability, resilience, and intelligence,” writes Coyote Project Director Camila Fox on the Project Coyote website. “We aim to create a shift in attitudes toward coyotes and other native carnivores by replacing ignorance and fear with understanding and appreciation.”

According to current government statistics, at least half a million coyotes are killed each year—one per minute—by federal, state and local governments and by private individuals in North America. The U.S. Department of Agriculture’s Wildlife Services program kills approximately 90,000 coyotes each year.

Topanga’s coyotes are lucky—it is illegal to hunt, shoot or trap any species of wildlife, and they live in a community that preserves large areas of open space and generally embraces the concept of coexisting with wildlife.

Wildlife biologist and veterinarian Jessica Sanchez recently spoke at a Zoom presentation that was part of the Conejo Open Space Foundation’s current speaker series. Sanchez, who has studied wildlife for the Institute of Wildlife Studies in the Santa Monica Mountain and on the California Channel Islands, stated that it has become customary to describe wildlife species like coyotes in terms of what they do for us—in this case, helping to control rodent populations. She explained that we must learn to appreciate their intrinsic value instead. “[Wildlife has] inherent worth,” Sanchez said.  “We should value them for what they are, not what they can do for us.”

Sanchez described the Santa Monica Mountains as fragmented habitat, with numerous edges—the boundary between human development and wildlands. This includes roads, trails, erosion, and invasive species in addition to buildings and fences.

“The human presence is felt in this environment,” she said. “Wildlife respond to us by decrease feeding time, not being as willing to move around and forage. Loss of ideal habitat drives wildlife into the urban interface, competing for the resources that are left.”

The key to successful coexistence with coyotes is keeping them wild.

Domestic animals should ideally be fed indoors and kept in at night. Cats, small dogs and young children should never be left unattended. Livestock, including chickens and rabbits, should be secured in pens and hutches. Coyotes can easily jump a six-foot fence.

Coyotes are often attracted to patio BBQs or outdoor kitchens, where meat drippings and scraps, or just the smell of food, lingers. Making sure that there are no scraps of food can help discourage unwelcome visitors.

For human-coyote encounters, Project Coyote recommends making noise to scare the coyote away. A rattle made out of an empty can containing a handful of pennies or a pop-up umbrella can be effective. The goal is to frighten the coyote, not harm it or harass it.

Sanchez stresses that mutual respect must extend to making provisions for wildlife, including continuing to preserve open space and wildlife corridors and planning for the future of wildlife as well as the future of humans.

“I recognize coexistence is not always easy, but making an effort to coexist and preserve wildlife is important, now as well as in the future,” Sanchez said.

Visit ProjectCoyote.org and the Santa Monica Mountains National Recreation Area’s Urban Carnivore research site, www.urbancarnivores.com, for coyote facts and additional information on how to coexist peaceably. To learn more about Sanchez and the Institute for Wildlife Studies, visit www.iws.org/staff_sanchez.html. For information on the Conejo Open Space Foundation, including upcoming programs, go to www.cosf.org