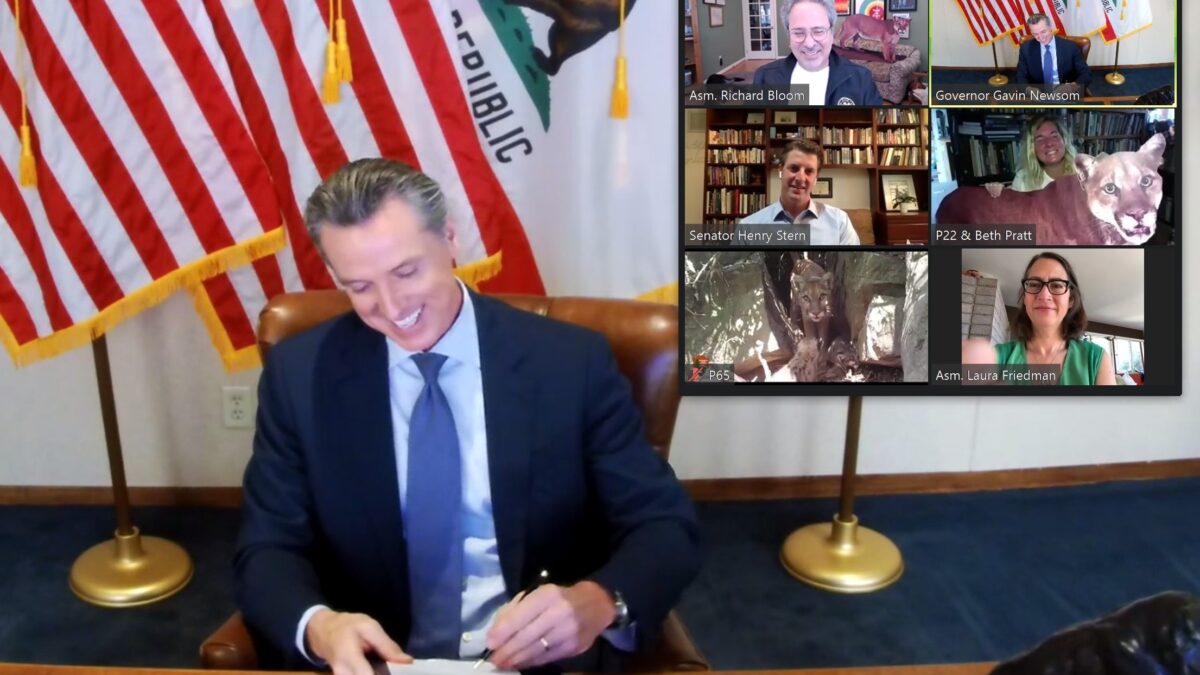 The new law makes California the first state in the nation to pass legislation limiting the sale and use of some of the most deadly and toxic rodenticides. The legislation is the result of almost 10 years of activism and campaigning on the part of numerous advocacy and conservation organizations, including bill sponsors Center for Biological Diversity, Animal League Defense Fund, and Raptors Are The Solution (RATS), and advocacy groups that include Poison Free Malibu, Friends of Griffith Park, Citizens for Los Angeles Wildlife (CLAW), and the Mountain Lion Foundation.

“The California Ecosystems Protection Act significantly limits the use of second generation anticoagulant rodenticides until their re-evaluation by the Department of Pesticide Regulation determines they will have no significant adverse effect on non-target wildlife,” explained Jennifer Hauge, Legislative Affairs Manager for the Animal Legal Defense Fund. “Second generation anticoagulant rodenticides are the most toxic – ‘one feeding kills’ – poisons that stay in rodents’ systems long after death and contaminate the food chain, sickening and often killing California’s iconic wildlife.”

Pratt Bergstrom’s response came in the form of a note to Newsom from P-22, the Griffith Park mountain lion who has become the poster child for coexistence. “It’s no secret I am Governor Gavin Newsom’s favorite mountain lion,” Prat Bergstrom posted for the big cat. “So I am glad he listened to me when I told him I needed his help—that all us mountain lions needed his help. When he signed AB 1788 today to ban those awful rodenticides in California, even an old cougar like me got a little emotional.” P-22 sent his thanks to everyone who wrote letters, made phone calls and campaigned for the bill to pass. “You likely helped save my life, and the life of some of my mountain lion relatives,” he wrote. Sometimes you humans are okay!”

“This bill is truly a life saver for wild animals in California who have been the victims of cruel rodenticides for far too long,” said Lisa Levinson, Wild Animal Campaigner for In Defense of Animals.

“We are very pleased,” Poison Free Malibu co-founder Joel Schulman told the Malibu City Council on the day of the signing. “The priority Governor Newsom gave to this bill was amazing. The governor spent a half an hour on this, signing it during an organized Zoom conference.”

Schulman had special thanks for Malibu Mayor Karen Farrer and Mayor Pro Tem Mike Pierson, who represented the city’s concerns over rodenticide at a key hearing in Sacramento. However, he cautioned that this legislation is only one step in an ongoing process. Permanently eliminating toxic rodenticides from the environment is an ongoing battle.

The moratorium didn’t come soon enough to help P-67, the young mountain lion mother who died leaving kittens P-91 and P-92 behind in the Simi Mountains north of Topanga. The exact cause of death is unclear, but this  unclear, and may have been septicemia, but the necropsy revealed that she had been exposed to five different anticoagulant rodenticide compounds, and to bromethalin, not an anticoagulant but a highly potent rodenticide that provides a lethal dose to rodents in a single feeding.

After an unsuccessful attempt to foster the kittens with another wild mountain lion family, P-91 and P-92 were transferred to the Southwest Wildlife Conservation Center in Scottsdale, Arizona, where they will spend the rest of their lives.

National Park Service spokesperson Ana Beatriz Cholo reports that the kittens are now about three months old and they are showing typical wild cat behaviors – stalking, wrestling, and climbing. “Officials at the wildlife sanctuary report that the two cats have developed unique personalities,” Cholo said. “P-91, the female, is bolder, while P-92, the male, is laid-back.”

“They are inseparable and a great comfort to each other,” says Linda Searles, the sanctuary director.

The kittens’ new “next-door neighbor” will be 15-year-old ‘Tocho’, SWCC’s most prominent mountain lion, and the last mountain lion raised from a kitten at the sanctuary. Searles said that if they all get along, they will eventually share his large enclosure.

“It’s too bad they couldn’t live in the wild, but we’re happy that they can give our old guy companionship,” Searles said. She added that the lions will serve as ambassadors for the Santa Monica Mountains mountain lion population and their species.

Activists hope that AB1788 will be a major step to preventing tragedies like this one from occurring in the future.