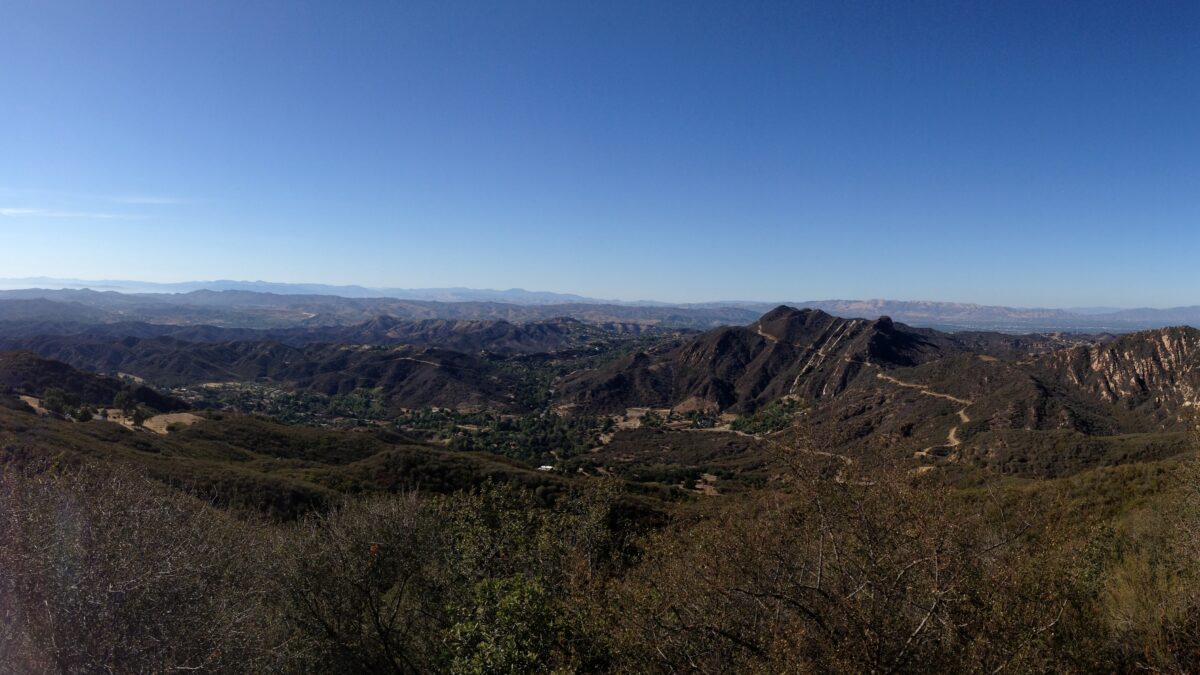 Topanga shows a very different reality from the one that was planned, with a 60,000-home development sprawled across the mountaintops. Photos by Suzanne Guldimann
Feature

It Could Be Worse

“I think Divination seems very woolly. A lot of guesswork, if you ask me.” —J.K. Rowling

2020 was the kind of year that casts a long shadow. Dire predictions for a future where the fallout from the coronavirus crisis continues to blight every aspect of life, and the fractures in society created by the outgoing administration do little to help us have the courage to move on, but when have predictions ever provided an accurate look at the future?

Is there anything more ridiculous than a futurist’s column 10, 20, 30 years after the fact? Those of us who may be disappointed not to have the flying cars and moon bases we were promised can rejoice that at least we still haven’t experienced nuclear winter—the frozen aftermath of nuclear annihilation that is the opposite extreme of global warming, a man made ice age instead of an overheated hell that was predicted during the tailend of the Cold War.

Residents of the Santa Monica Mountains are especially blessed to live in a future very different from the one we were promised. That promise started with philanthropist and real estate tycoon Frederick Hastings Rindge, who bought the entire Topanga Sequit Malibu Rancho in 1892. Prior to Rindge, the ranch was undeveloped except for a few homesteads, the land that runs along the coastline of the Santa Monica Mountains, from Topanga to the Ventura county line was used mostly for running cattle. Rindge bought the land with the idea of developing an America Riviera made up of several towns.

“If you have never laid out a town in your mind, begin now,” Rindge advises in his book Happy Days in Southern California. “You will never regret it. Even if the trolley never comes your way, you will say to yourself, ‘Well, how I did enjoy my mental city in anticipation; the realization could never have been so joyous, so it is all right that the plough still turns up my city’s streets, and that those great, tall office buildings are still only castles in the air.’ By all means build a mental city. That is a privilege peculiarly Californian.”

Rindge died in 1905, his plans for building multiple cities on the coast never progressing much beyond a fanciful list of names:

Rindge wasn’t the only one with visions of what this area would become. In 1925, real estate promoter John Russell McCarthy wrote a book promoting land  in the Santa Monica Mountains. In These Waiting Hills he predicted that “Homes, of course, will rise here in the thousands. Many a peak, perhaps, will have its castle. Far back from every road, on crest, slope and canyon rim, homes will rise on green estates…Lawns will displace toyon and sumac.”

“Here in the midst of beauty old and new, people from all over the world will come to live, bringing with them the best thought and custom that their old communities provided. Is it altogether vain to think that, given such people and such a place, a new and better kind of community will arise?”

At that point, McCarthy’s prognostication takes flight: “The airplane will soon become common; may easily predominate within a few years. Green landing fields will checker the summits. Hangers will hide under green vines and trees. Sedate businessmen will ride in five minutes from their hilltop homes to their city offices. Mother will take the kids for a spin before breakfast, out over Russell Valley and down by the sea at Malibu. The family blimp, even, will not be a stranger to these hills.”

Rindge and McCarthy were poets as much as promoters, but Los Angeles County had its own plans for the area, guided in part by another kind of futurist.

In 1963, Los Angeles County planners began pushing for massive development in the eastern Santa Monica Mountains, spreading along the ridgelines from Topanga to Sullivan Canyon.

At a December 1963 meeting, Architect William Pereira, the designer of the project, outlined plans “to turn the Santa Monica Mountains into a vast home community.” The Mountain Park development proposed ten “village centers,” spread over more than 11,000 acres of previously undeveloped mountain terrain, accommodating a population of 60,000. More than half of that development was proposed for Topanga.

A 1963 Los Angeles Times article described a proposal that sounds more like the lair of a James Bond movie villain than anything that would be feasible in real life, complete with “facilities concealed in architectural caves in the steep canyons,” and “cascade housing built into the hillside itself and served by ‘inclinators,’ [that will] take the place of high rise apartment towers.”

That may sound over-the-top, but it was entirely in keeping with Pereira’s vision. He was famous for his love of science fiction and a passion for Bond-style cars. Pereira is best remembered now for the Transamerica Pyramid in San Francisco. but he’s responsible for the mega-developments that became the master-planned cities of Newport Beach and Irvine. He was looking forward to the challenge of flattening an entire mountain range to build his vision.

Down on the coast more radical development was planned. A 1966 report by the Los Angeles Regional Planning Commission predicted that with sewers to accommodate growth, the population of Malibu would expand to 117,000 by 1980. Malibu voters fought back, overwhelmingly defeating county-sponsored sewer bond measures in 1966, 1968 and 1971.

To accommodate that population, the county proposed a manmade causeway built from the mountains flattened for all of that other development that would have carried drivers from Santa Monica to Malibu, the route lined with luxury developments and artificial beaches.

The causeway doesn’t appear to have made it past the initial planning phase, but an eight-lane freeway along the coast and through Malibu Canyon remained a threat well into the 1970s, when it was finally derailed by a combination of the Coastal Act and organized community opposition.

Burton W. Chase, the Los Angeles County Supervisor responsible for transforming one of the last pristine wetlands on the California Coast into Marina Del Rey in 1953 had plans to build marinas at Topanga, Malibu Creek, Point Dume, and Leo Carrillo State Beach. As recently as 1986, there were plans for a five-story, 500-room hotel and new “urban center” at the bottom of Topanga Canyon. This city of 700-800 apartment units and condos, and “upscale shops and restaurants” proposed a “new multimillion-dollar channel to safely and permanently route Topanga Creek to the ocean,” according to the Los Angeles Times.

Community activism is ultimately what reined in all of these plans. When we look up at our mountains and see a vista of oaks and rock formations, or spend a day on the beach without causeways or yacht clubs on the horizon, it is a tribute not to the futurists but to the people who worked to ensure that the futurists’ predictions didn’t come true, or at least that those visions were tempered.

Perhaps that is the real power of divination: that in seeing something terrible in the tea leaves, we set to work to change the future and ensure that thing doesn’t come to pass, and if we ended up without personal dirigibles to transport ourselves and our families to and from our mountaintop homes, at least we still have mountains to call home. Making sure they stay safe from climate change and overdevelopment is an ongoing challenge, but little by little one really does travel far, and often in a direction no one could have predicted.

What it Really Means to Be a Spiritual Warrior