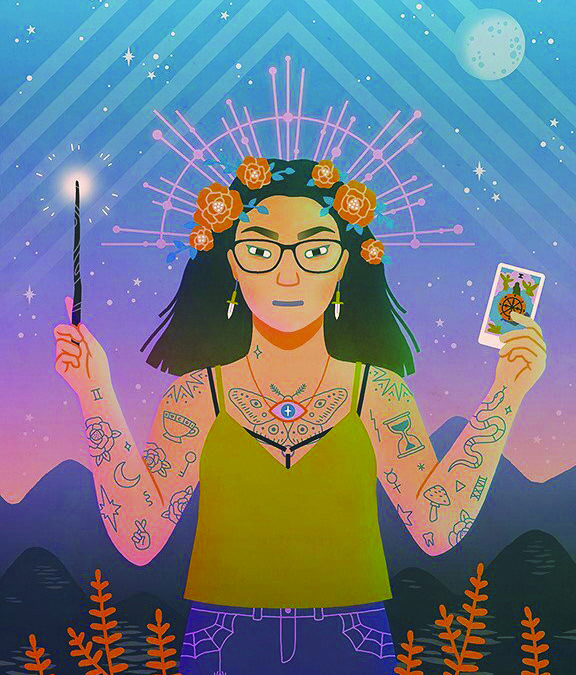 This is a self portrait of Camille Chew, the young illustrator and recent Rhode Island School of Design graduate who created the artwork for this year's Lunar New Year postage stamp. Image courtesy of USPS
Engage

The Lunar New Year on February 12 will herald the arrival of the Year of the Ox. For anyone who is still struggling with turmoil in the aftermath of 2020—the Year of the Rat— this could be a good thing, because the Ox traditionally brings peace and stability, while the rat is associated with chaos and frenetic energy.

Lunar New Year is often called Chinese New Year, but this important holiday is celebrated throughout much of Asia and around the world. Unlike the fixed January 1 start date for Western New Year’s Day, Lunar New Year is a movable feast, usually occurring on the day of the second new moon following the Winter Solstice—between January 21 and February 20.

The Asian calendar is cyclical not linear, and it is tied to the 12-year cycle of the zodiac. Each year is associated with one of 12 animals and five elements. The Rat, Ox, Tiger, Rabbit, Dragon, Snake, Horse, Goat, Monkey, Rooster, Dog, and Pig are combined with the elements wood, fire, earth, metal and water. This isn’t just the year of the ox, it’s the year of the metal, or golden, ox, and that, according to astrological tradition, means this year will be one with a steady, positive energy.

In a year when there isn’t a global pandemic, Los Angeles is home to a wide range of Lunar New Year celebrations, culminating in the annual Chinatown dragon parade, a 122-year tradition. This year, Lunar New Year festivities will be celebrated at home instead of in the community, and the family visits that are a key part of the holiday are on hold, but there are still many ways to observe this more than 3000-year-old holiday.

Traditions vary, but some of the most popular and widely observed customs include wearing red, and giving gifts of money in red envelopes. Debts are traditionally settled and quarrels are resolved before the New Year, and families decorate their homes with red paper lanterns and streamers, and flowers. The Lunar New Year tradition of decorating with golden chrysanthemums has become so popular and widespread that the plants are often available at grocery stores this time of year.

Food is an important part of the holiday throughout Asia and is an easy way for everyone to participate in Lunar New Year. Oranges and tangerines; spring rolls; dumplings; and noodles are all considered especially lucky.

While it is traditional to clean house before the new year, it’s bad luck to clean on New Year’s Day—one might sweep one’s good luck away, and it is a good idea to be happy and appreciative, to ensure a happy and good year.

The US Postal Service commemorates Lunar New Year with special postage stamps. This year’s stamp, which will be released on February 2, features a bright blue ox and is based on artwork by Rhode Island illustrator Camille Chew.

According to the USPS press release, the stamp “calls to mind the elaborately decorated masks used in the dragon or lion dances often performed during Lunar New Year parades, these three-dimensional masks are a contemporary take on the long tradition of paper-cut folk art crafts created during this auspicious time of year.”

The Year of the Golden Ox, starts on February 12, and lasts until January 30, 2022, when the year of the Tiger roars onto the scene. Here is hoping that the calm, stubborn, determined, serene ox will bring some much needed harmony and good sense to a world grappling with major challenges.