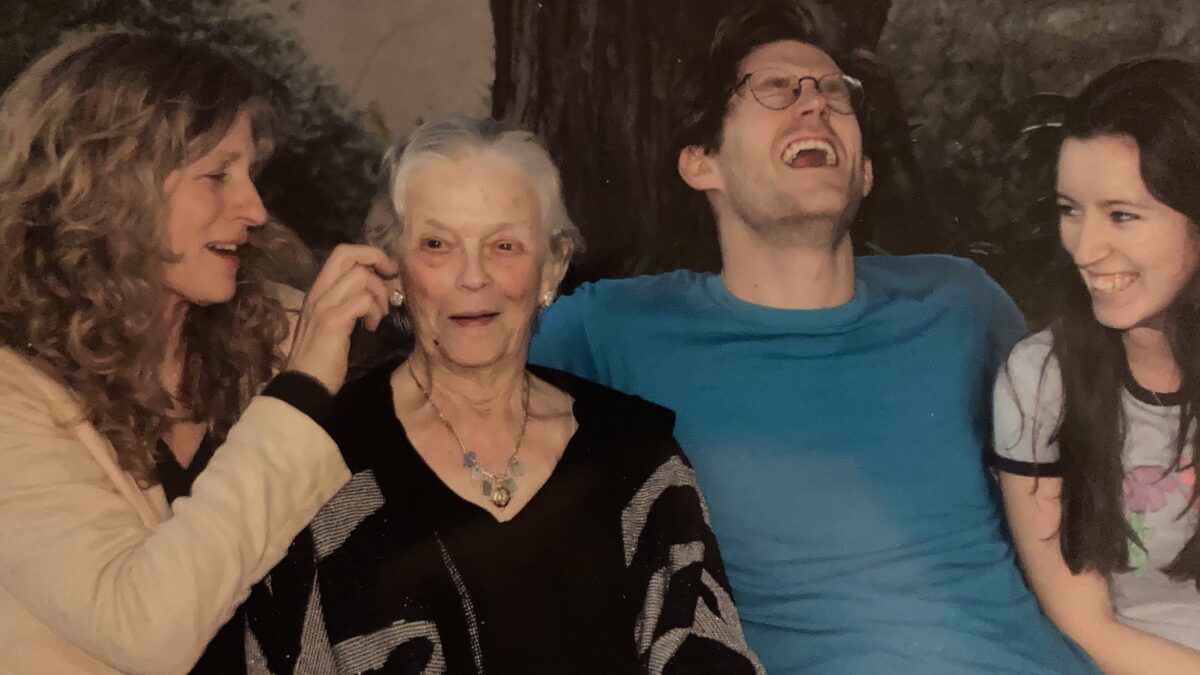 Gilda Frantz, friend to many Topangans and a former Hollywood starlet who became a key figure in the world of Jungian analysis, left this world on December 24, 2020. She was 93.

Her health had been declining since she made the decision to stop eating a few weeks ago.

Born Gilda Feldrais in Brooklyn, New York, to parents who separated two months before her birth, she spent the first years of her life constantly on the move. At the age of 6, Gilda was sent from her aunt and uncle’s home in Detroit, Michigan, to live with her mother and elder sister in Santa Monica. She made the move alone, on a Greyhound bus, with a nametag pinned to her little dress. Her mother later sent her back east in the same manner, where her father installed her in a home for German Jewish refugees in Brooklyn. She moved so often in these early years that she attended 28 different elementary schools before finally settling with her sister in Burbank at the age of 13.

For a short time she had an active career as a theater, film, and television actress in Hollywood and New York. She palled around with Orson Welles, Charlie Chaplin, Jr. and Jock Mahoney, and appeared in the Abbott and Costello film The Wistful Widow of Wagon Gap. Then, in 1950, she married the love of her life, psychiatrist and Jungian analyst Kieffer Evans Frantz.

Together with others, they began building a community for Jungian professionals in Los Angeles. This work culminated in their helping to found the C.G. Jung institute of Los Angeles. Kieffer Frantz went on to establish the world’s first low-fee Jungian clinic, which now bears his name at the C.G. Jung institute of LA. Gilda became an analyst in her own right in 1977, and continued to work with patients until shortly before her death.

Gilda served as President of the C.G. Jung Institute from 1980-1983, and was both a founding editor and co editor-in-chief of Psychological Perspectives, a journal of world thought. She also served on the first board of the Philemon Foundation; an organization dedicated to publishing the complete works of Carl Jung. In that role, she helped oversee the first publication of The Red Book: Liber Novus, a key piece of Jung’s output that had never before been available to the public. In addition, she was on the first board of The Archive for Research of Archetypal Symbolism, ARAS.

Gilda’s lecture on the volume’s importance at the Hammer Museum in Los Angeles was a capstone to a storied speaking career. She gave lectures on Jung in Japan, Germany, and all over the United States. She was involved in the film project that produced the film A Matter of Heart and the series called Remembering Jung from its inception in the 1970’s.

She appeared in A Matter of Heart as the subject in the film Remembering Jung #7 and as the interviewer of Hilda Kirsch in Remembering Jung #12. Her first book, Sea Glass: A Jungian Analyst’s Exploration of Suffering and Individuation, was published in 2015 when she was 87.

Gilda’s accomplishments are all the more impressive in the context of the tragedy she regularly faced. Her husband died suddenly in 1975, leaving her the sole parent of two college-aged children. Her son, Carl Gilbert Frantz, predeceased her in 1992, a victim of the AIDS crisis. She also lost two grandchildren, Ariel Simone Frantz Katz and Zalman Ezekiel Frantz Katz, to sudden heart attacks caused by pediatric cardiomyopathy, and her brother, Herman Feldrais, to suicide.

Gilda was a lifelong activist. As a volunteer with the NAACP in the early 60s and after, she was a fierce champion of the civil rights movement. She was also a passionate and outspoken supporter of the LGBTQ movement. After the death of her son Carl, she ran support groups for those who had lost people they loved during the crisis. She later created a scholarship fund for the gay community at Grinnell College, Carl’s alma mater, and donated her extensive library of LGBTQ materials to the library at Antioch University in LA, as a way to support their psych program’s groundbreaking subspecialty in LGBTQ issues.

Her intimate experience with the AIDS epidemic made her deeply aware of how negligence and cruelty can lead a government to fail vulnerable populations. This perspective led her to a lifetime of support for progressive politicians.

She is survived by her younger sister Penny; daughter Marlene; grandchildren Kieffer and Malka; great grandson Ira; and a multitude of nieces, nephews and cousins.

In lieu of flowers her family requests donations be made to the Gilda Frantz Scholarship at the CG Jung Institute of LA by making a contribution to the CG Jung institute and specifying Gilda Frantz on your donation.

Donations can be made online or by check.