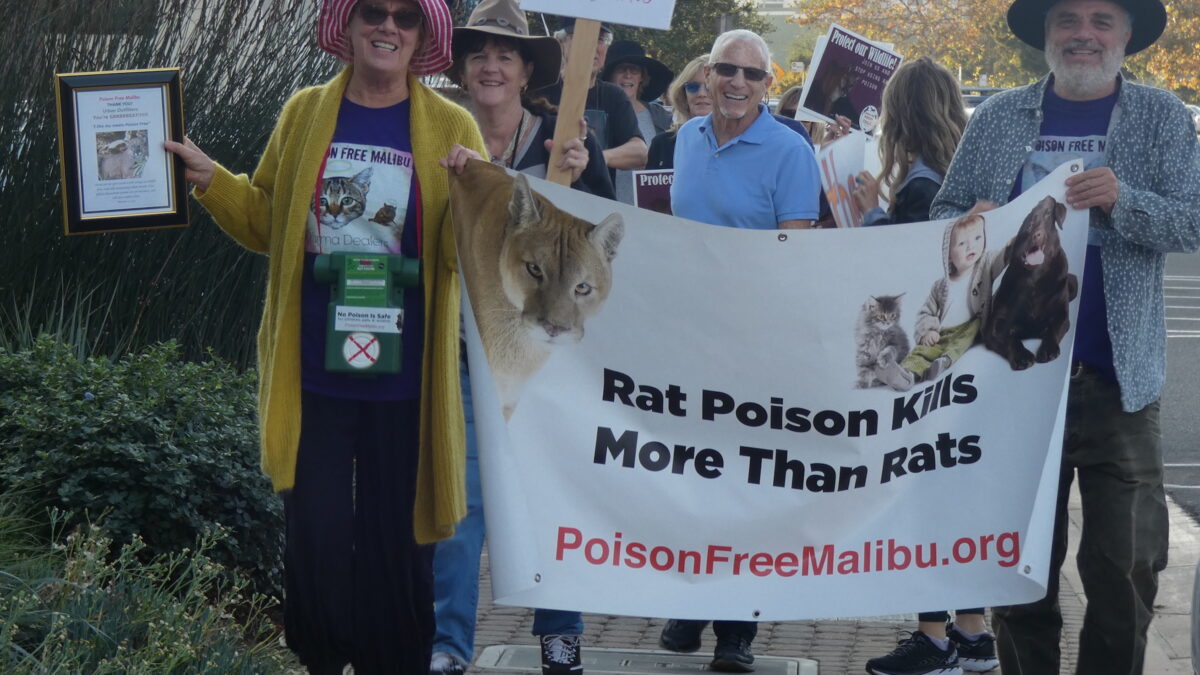 Poison Free Malibu co-founders Kian and Joel Schulman have campaigned for years to get toxic pesticides out of the environment in Malibu and throughout the Santa Monica mountains. This photo is from a 2019 rally for the Local Coastal Program amendment that the Coastal Commission certified on May 13, 2021.
NewsBeat

It’s taken years of activism, advocacy, protests, marches, letter writing campaigns, meetings, and a full environmental impact report, but the city of Malibu is finally going poison free. On May 14, Malibu joined Topanga and the rest of the unincorporated Santa Monica Mountains in officially banning the use of deadly rodenticides and other environmentally damaging pesticides.

The need to eliminate anticoagulant rodenticide from the environment has become increasingly urgent. This class of pesticide prevents blood from clotting, causing an animal that directly consumes the poison or consumes prey that is exposed to the poison to bleed to death internally. It’s a slow death. These toxins also impact the immune system, leaving predators like bobcats and mountain lions susceptible to a potentially fatal type of mange. Anticoagulants have been found in the blood of nearly 90 percent of tested mountain lions and bobcats in the Santa Monica Mountains.

The California Coastal Commission unanimously approved Malibu’s Local Coastal program amendment banning the chemicals. The agenda item received a massive outpouring of support in the form of letters and emails. The only opposition came from the pesticide industry The Coastal Commission’s decision to certify the amendment is being viewed as a big step towards eliminating rodenticides throughout the entire coastal zone.

“Under the Oaks” Performance Series at the Theatricum

Topanga Film Festival Late Submission Deadline is September 23.  They are looking for the best in short, narrative, and documentary films that display curiosity and...

Adults/Teens 5:30-7:30 Mondays only thru Sept. only Registration:  Please contact Edison Park at vikinglance@yahoo.com

KinFlow offers youth sports classes every Tue/Thu starting this week at Manzanita on Old TC. Classes are just starting up again now after a Covid...

Practicing embodied justice: how whiteness impacts your leadership. A space for white bodied leaders to build awareness, skills, and practice for unlearningand disrupting how white...

In little more than a decade of recording music and playing sold-out shows worldwide, Jake Shimabukuro has already redefined the ukulele. In his hands this...

KinFlow offers youth sports classes every Tue/Thu starting this week at Manzanita on Old TC. Classes are just starting up again now after a Covid...

A fun, hands-on way to volunteer & help us grow local milkweed, sage & other natives for restoration, while taking a few home for yourself!...

Calling all land lovers! Please join us to help restore Rancho Sierra Vista. We have a variety of projects we need your help with: Restore...

Join us on a guided hike collecting Narrowleaf Milkweed seed! Learn how to identify, bag, and tag maturing milkweed seeds for restoration. About this event...

Water and care for native oak trees in Trippet Ranch of Topanga State Park! Help heal the Santa Monica Mountains through reforestation About this event...

Join Ranger Aaron as he hikes and chats his way up towards the Roberts Ruins by the waterfall at Solstice Canyon. We will learn about...

Theatricum will open the season on Saturday, July 10 at 7:30 p.m. with a fresh look at Julius Caesar. Director Ellen Geer views Shakespeare’s iconic...

It’s that time of the year again! Tarantulas on the move! Join a ranger and seek out these little critters on the trails. Find out...

William Pereira: The Architect of Yesterday’s City of Tomorrow

Nights of the Jack