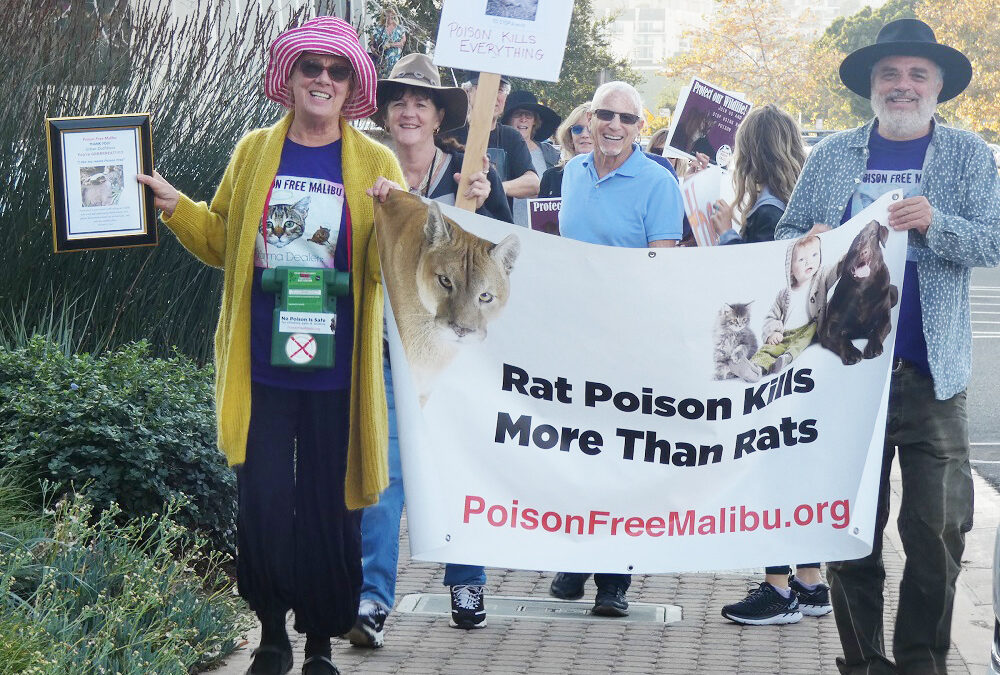 Poison Free Malibu co-founders Kian and Joel Schulman have campaigned for years to get toxic pesticides out of the environment in Malibu and throughout the Santa Monica mountains. This photo is from a 2019 rally for the Local Coastal Program amendment that the Coastal Commission certified on May 13, 2021.
NewsBeat

It’s taken years of activism, advocacy, protests, marches, letter writing campaigns, meetings, and a full environmental impact report, but the city of Malibu is finally going poison free. On May 14, Malibu joined Topanga and the rest of the unincorporated Santa Monica Mountains in officially banning the use of deadly rodenticides and other environmentally damaging pesticides.

The need to eliminate anticoagulant rodenticide from the environment has become increasingly urgent. This class of pesticide prevents blood from clotting, causing an animal that directly consumes the poison or consumes prey that is exposed to the poison to bleed to death internally. It’s a slow death. These toxins also impact the immune system, leaving predators like bobcats and mountain lions susceptible to a potentially fatal type of mange. Anticoagulants have been found in the blood of nearly 90 percent of tested mountain lions and bobcats in the Santa Monica Mountains.

The California Coastal Commission unanimously approved Malibu’s Local Coastal program amendment banning the chemicals. The agenda item received a massive outpouring of support in the form of letters and emails. The only opposition came from the pesticide industry The Coastal Commission’s decision to certify the amendment is being viewed as a big step towards eliminating rodenticides throughout the entire coastal zone.

Rescheduling due to Palisades Fire

The Train to Nowhere: Travels on the Hueneme, Malibu & Port Los Angeles Railroad