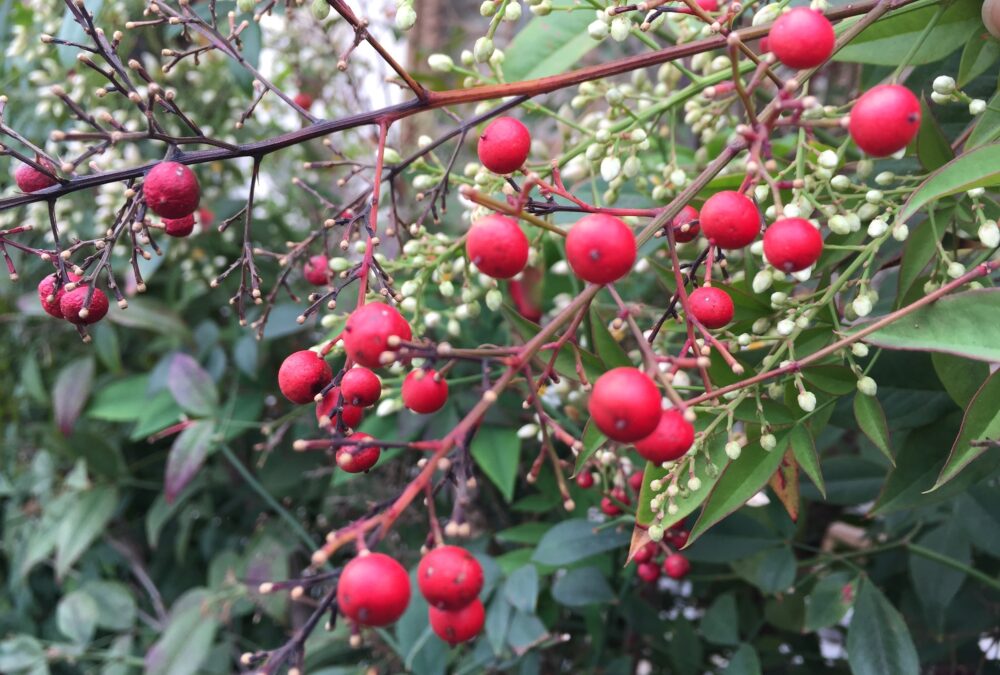 The berries of heavenly bamboo, or Nandina, are potentially deadly to songbirds. This year, when resources are stretched because of drought, they are an even bigger risk. Cutting the berries off as soon as they appear can help save the lives of native birds like robins and mockingbirds. All photos by Suzanne Guldimann
Discover

Wildlife advocates are warning about a common ornamental plant that grows in gardens all over the West. Heavenly bamboo (Nandia domestica)—a well-behaved shrub with bamboo-like leaves and pretty red berries—is poisoning wild birds. The berries can contain high levels of cyanide. Birds usually avoid the berries, but resources are scarce this year with the drought and birds may be tempted to eat the deadly berries. Robins, mocking birds and cedar waxwings are the most frequent victims of Nandina poisoning. Rather than uproot the plant, one can simply remove the berries, a move that will also eliminate the temptation for small children and pets to sample the attractive red fruit.

It may come as a shock to find that a ubiquitous garden plant is potentially deadly, but N. domestica isn’t the only poisonous plant in the garden. There’s a famous garden in Britain’s Alnwick Garden, that is filled exclusively with around 100 toxic, intoxicating, and narcotic plants. It’s a favorite with tourists, but one often doesn’t have to go further than one’s own backyard for a similar experience here. Southern California gardens are often a poisoner’s paradise.

Heavenly bamboo is currently in the spotlight for its impact on birds, but dogs, cats and children are also frequent victims of accidental poisoning. One of the most common causes of fatal poisoning for domestic animals is the sago palm or king sago. All parts of this palm-like plant are toxic—even the pollen, which reportedly can cause headaches and aggravate asthma, but the real danger is from its bright orange seeds, which are potentially deadly and cause irreversible liver failure. Sago isn’t a “true” palm, it’s a member of the ancient cycad family, plants that were around when the dinosaurs roamed the earth. It’s one of the leading causes of plant toxin mortality in dogs, according to numerous studies, but children have also been victims of cycad poisoning.

The best way to avoid accidental cycad poisoning is to remove the seed-bearing female cones and pollen-forming male cones before they ripen. Contact with the sharp ends of cycad fronds or the spines on the plant’s trunk can cause rashes and infections, so all parts of the plant should be handled with care.

The spines and sap of agaves, one of the most popular plants for drought-tolerant landscaping, can also cause severe rashes and infected wounds. Calcium oxalates raphides, sharp crystals of oxalic acid, are the defense mechanism in the sap that protects these plants from predators. A similar chemical can be found in the sap of the houseplant dieffenbachia.

Oleander, prized for its colorful flowers and ability to thrive in almost any conditions, is also highly toxic. Accidental poisoning in humans and pets is reportedly rare because the leaves have a terrible taste. However, horses, goats and llamas are all at risk from this beautiful but deadly plant, and the sap can cause painful rashes and eye irritation. Smoke from burning the wood is also toxic. This is one plant that should never end up as firewood or in the compost pile.

Sensitivity to plant toxins varies greatly: some people break out in rashes handling common garden plants like tomatoes, asparagus, and melon vines, others are unaffected by even the most powerful skin irritants, like poison oak.

The list of plants that can cause contact dermatitis is long, and includes everything from the blue-flowered plumbago or leadwort bush (Plumbago auriculata) to silk oak trees—Grevillea robusta, which causes a skin and eye condition known as gravillea poisoning.

Many common plants have the potential to cause another skin problem: phytophotodermatitis.

A case study published in the medical journal Burns in 2008, describes how the sap of plants like fig trees is rich in “phototoxic agents,” or “flurocoumarins,” which can prevent human skin from blocking solar UV radiation, causing severe skin burns.

The result? Painful, raised plaques on the skin that behave like burns, creating large blisters. Healing can take weeks, and victims of this kind of burn may experience “hyper-pigmentation”—long term discolored patches that remain sensitive to sunlight.

Figs aren’t the only potential cause of this type of chemical burn. Citrus sap—anecdotal evidence suggests lime is the biggest culprit—and members of the carrot and parsley family, including parsnips, dill, and celery, can also potentially cause phytophotodermatitis.

The sap of many Euphorbias, a family of plants with many drought tolerant and strikingly beautiful garden varieties that are increasingly popular as Southern California garden plants, can cause another type of dermatitis: painful rashes, facial swelling, temporary blindness and in severe cases, anaphylaxis. Many euphorbias are also toxic if consumed, causing problems for children and pets.

Euphorbia tirucalli, better known as pencil cactus, or fire sticks, can cause severe eye irritation or even permanent blindness. The milky white sap tends to spurt out when the plant is cut or damaged, increasing the risk of eye injury, and yet this is an incredibly popular plant that is grown everywhere in Southern California.

Terracina spurge, a euphorbia that has escaped from gardens to run amok in the Santa Monica Mountains, where it is a noxious weed, can cause a poison oak-like rash. Other popular members of this family include crown of thorns, and a host of popular garden cactuses. The holiday plant poinsettia also belongs to this family, but its reputation for being toxic is now thought to be overblown. At worst, consuming this plant may give a child or pet an upset stomach but do no lasting harm.

We are often stuck with the foundation plantings our homes came with, but new plantings don’t have to include toxics. Native plants can offer safe, bird and animal friendly options, and many are also drought tolerant. California golden currant, Ribes aureum, is a similar size to heavenly bamboo and offers attractive flowers followed by edible fruit. It’s easy to see why people love pencil cactus, with its vivid coral-colored stems, but native plants like sage, California fuschia, buckwheat, and low-growing cultivars of ceanothus, are good substitutes for the Euphorbias and offer vibrant color with the advantage that they won’t poison anyone.

Native shrubs like coffeeberry, manzanita, topon, scrub oak and giant rye are good alternatives to foundation plantings like oleander and agave, and offer habitat and food for native birds, but not all native plants are non toxic. The pretty white berries of snowberry and the seeds of the otherwise edible holly-leafed cherry both contain the kind of vegetable alkaloids murder mystery maven Agatha Christie delighted in, and the toxic compounds in sacred Datura, also known as Jimson weed, have been known to make unsuspecting gardeners ill just through skin contact. Teenagers seeking a mind-altering experience are the most common victims of datura poisoning, but this native plant’s tropical cousin the angel trumpet, also known as brugmansia, also contains high levels of tropane alkaloids—scopolamine, hyoscyamine, and atropine. Children are the most common victims of brugmansia poisoning, because the flowers are tempting to handle or put in the mouth.

According to Poison Control, over 100,000 exposures to toxic plants are reported to poison centers throughout the United States each year. Most exposures are of “minimal toxicity,” but serious medical complications, and sometimes even fatalities do occur, and eight out of ten incidents of plant toxicity involve children under six.

Creating a fenced “safe play space” for pets and children is the best way to prevent problems involving ingesting toxic plant material. It’s a good idea to avoid planting spiny or toxic plantings near pathways or high traffic areas, regardless of whether there are children present. Wearing safety glasses, long sleeves, and gloves while trimming plants or weeding can prevent most plant-related problems for adults.

California Poison Control recommends that parents of young children learn the names of the plants in their garden so Poison Control or medical personnel will know what they are dealing with in an emergency.

Immediate medical treatment is recommended for all toxic plant related emergencies. Poison Control can be reached 24 hours a day at 800-222-1222.