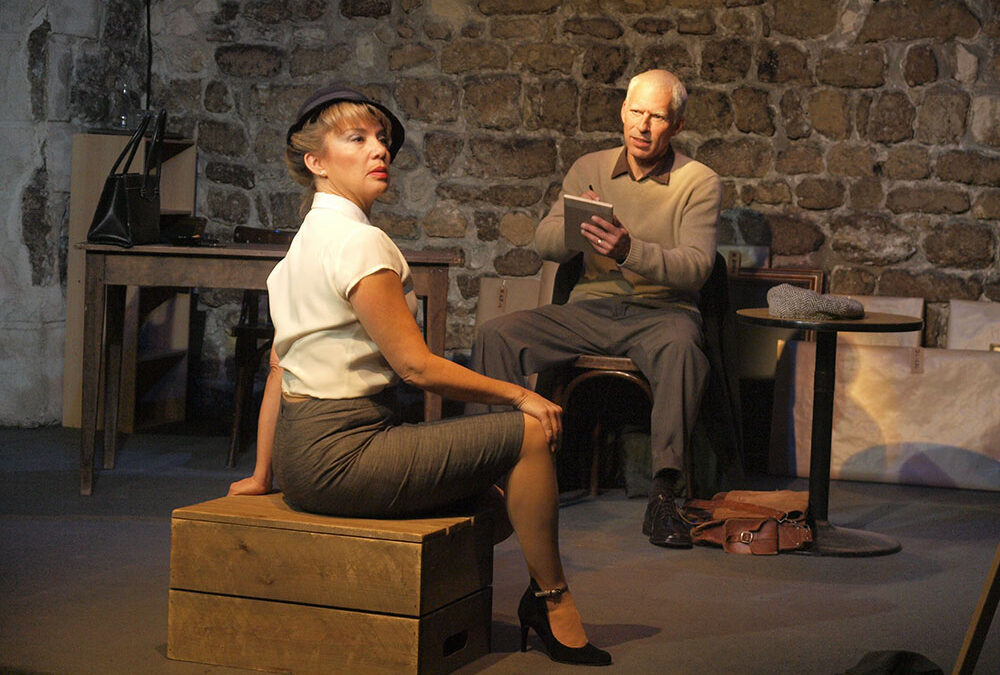 “A Latina woman can be anything, she doesn’t have to adhere to a stereotype.” Topanga resident Natalia Lazarus is a graduate of the Sorbonne University in Paris, France, the American Academy of Dramatic Arts in New York City, and the Film Program at New York University. She studied at the University of London, the British Film Institute and the Ned Herrmann Brain Dominance Center. We were discussing one of the many plays she directed and starred in, A Picasso by Jeffery Hatcher. The play also starred Charles Fathy and is set in occupied France.

During the war, artists and writers faced a very real threat from the Nazi Ministry of Propaganda. There’s a story that a Nazi officer sent to storm Picasso’s apartment pointed to a photograph of the mural, ‘Guernica’ (depicting a Spanish city that was bombed by the Nazis and Italian fascists) and asked, “Did you do that?” Picasso defiantly quipped, “No, you did.”

Natalia’s character in the play is an interrogation officer who is not only German and Jewish, but is a woman. The play is also the first about Pablo Picasso to have received approval from Fundación Picasso. “I am a Latina woman, who because of my heritage, can play a German Jew. This is what keeps me alive.”

A Picasso was performed in English, Spanish and French in several countries, and gently nods in the direction of global citizens. Picasso himself had immigrated from Spain to France, and could have been deported at any time. Parisians were constantly harassed by Nazis. During the war, Nazis forbade bronze casting, one of Picasso’s beloved mediums. His friends in the French Resistance supplied him with smuggled bronze. No light feat as one could imagine. In return, he housed anyone the resistance sent his way. During those wartime years, Picasso wrote several hundred poems and later donated many works to Warsaw’s Art Museum.

Natalia will soon be publishing her own book of poetry titled My Love Affair; Thorns and Roses —Ode to an Unforgettable Romance. It will have selected artworks from Picasso. She is also in pre-production for the film Remains of a Nation, which she wrote, and will direct and star in.

“Traditionally in films about the military, the main characters are males,” Natalia points out. “This film will be a romance of what the world was, set in the future, where two soldiers will bond as women.”

Natalia, the daughter of a diplomat and a psychologist, is originally from Tegucigalpa, the capital of Honduras. She still enjoys traditional foods like griddled pupusas made from corn flour or masa, baleadas, pan de coco—a coconut bread made in the northern coast, coconut candy, salsa music and dancing. She recalls fondly the religious festivals like Semana Santa, but she was also influenced by cinema from an early age.

“We grew up in hotels, and on weekends at 3 p.m. my brother and I would go to the cinema,” she recalls. The first roles by women that left a lasting impression on her were Jessica Lang in The Postman Always Rings Twice, Meryl Streep in Sophie’s Choice, Glenn Close in Dangerous Liaisons.

Today, diversifying the entertainment industry and amplifying stories from marginalized communities is a big part of Natalia’s advocacy. She is the Artistic Director and CEO of the Los Angeles Performing Arts Conservancy, a degree granting university offering training in film, television, theatre, filmmaking and screenwriting. The Conservancy’s classes for students, foreign and domestic, are taught in small groups to optimize the learning environment.

LAPAC was recently accredited by the National Association of Schools of Theatre, making it possible to grant student visas, and make financial aid a possibility as well. During the pandemic, LAPAC was able to create a revenue stream via distance learning. It is currently nestled in a building at the Santa Monica Promenade that would have made an excellent candidate for preservation, but the school won’t be there much longer, expected to be replaced with retail or offices. In the school’s main office that decades ago was a gentlemen’s lounge, Natalia shares that in a few months the building is scheduled to be torn down. Walking around one of the stages, the original wooden floors creak, as if gently nodding a final farewell to all the artists and students it has supported along the years.

“We have grown so much and so it’s time to find a larger building,” Natalia says. I photograph her in what may very well be her last sitting in one of the main theaters. A woman down the hall pokes her head out during my tour. She, too, works in the arts, figure skating to be exact. “Natalia, do you know the official date we have to vacate?” Natalia shared it’s possible demolition may not start as early as anticipated. “Where will you go?”, the neighbor asks.

“I am not sure, but wherever it is, we can go together!”