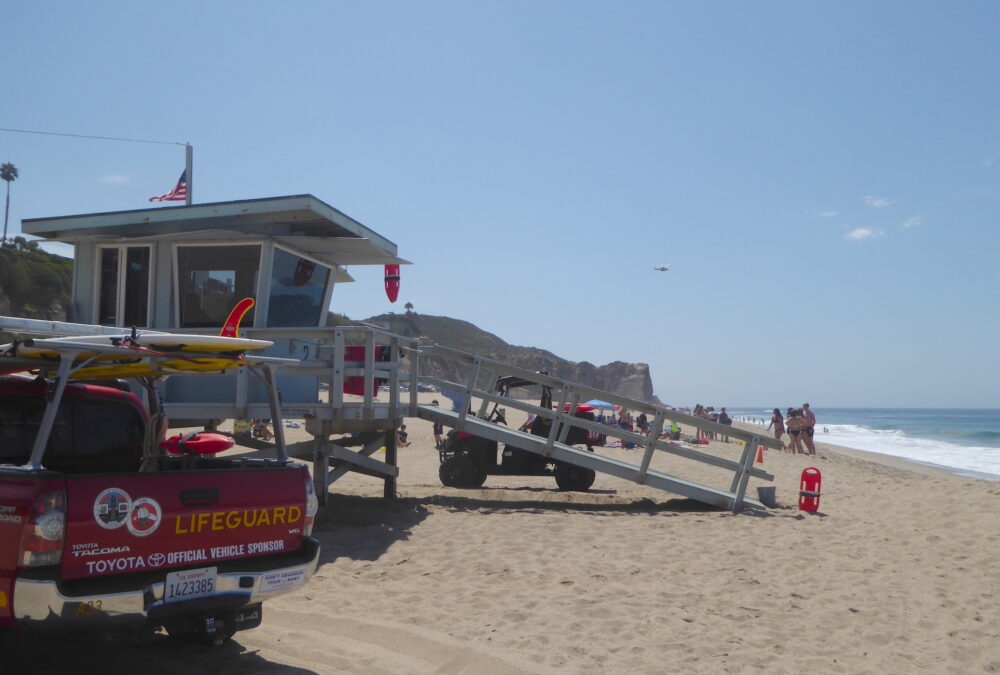 Beach weather is here, and the Los Angeles County Lifeguards have some safety tips for swimmers and surfers.

Rip currents are a major safety issue along much of the local coast. Rip currents form when water from breaking waves forms a channel-like current when it is forced back out to sea. The force of the water can form lateral currents, called feeders, that feed into the rip current. Rip currents can be large or small, but even a small one can carry an unwary swimmer straight out to sea. The most important thing to do if caught in a rip current is not to panic. The best way to escape is to swim parallel to the shore until out of the current.

The water in a rip area is often a different color because the turbulence stirs up sediments, but that can be hard to see when you are in the water. It’s a good idea to look first, and swim near a lifeguard.

Rip currents aren’t the only hazard. Large surf can rearrange the ocean bottom, creating deep holes or exposing underwater rocks in an area that might have been sandy just the day before. Use care when entering the water. Lifeguards are glad to provide guidance on ocean conditions.

Orange flags mark designated swimming and body-boarding areas on beaches with lifeguards. The flags are placed in the safest area to swim away from rip currents and inshore holes. Depending on the season and activity, you may see the two flags crossed. This serves as a designated point of reference to keep swimmers and surfers separate.

Orange cones designate emergency parking for lifeguard vehicles. Every open lifeguard tower and main lifeguard station has a coned-off area set up in case of emergency. It is OK to walk through this space, but not to sit there.

When beach conditions are crowded, lifeguard towers may fly the black ball flag. This looks ominous, but just means no surfboards are permitted in the vicinity of the tower. Fiberglass and foam surfboards, body boards and inflatable canvas surf mats are the only acceptable flotation devices on Los Angeles County beaches. Other inflatable flotation devices are not allowed in the water. Leave that life-sized inflatable dragon in the pool at home!

Disabled beachgoers don’t have to miss out on the fun. Beach wheelchairs and beach access mats are located throughout the 72 miles of Los Angeles County coastline, including at Topanga State Beach and Surfrider.