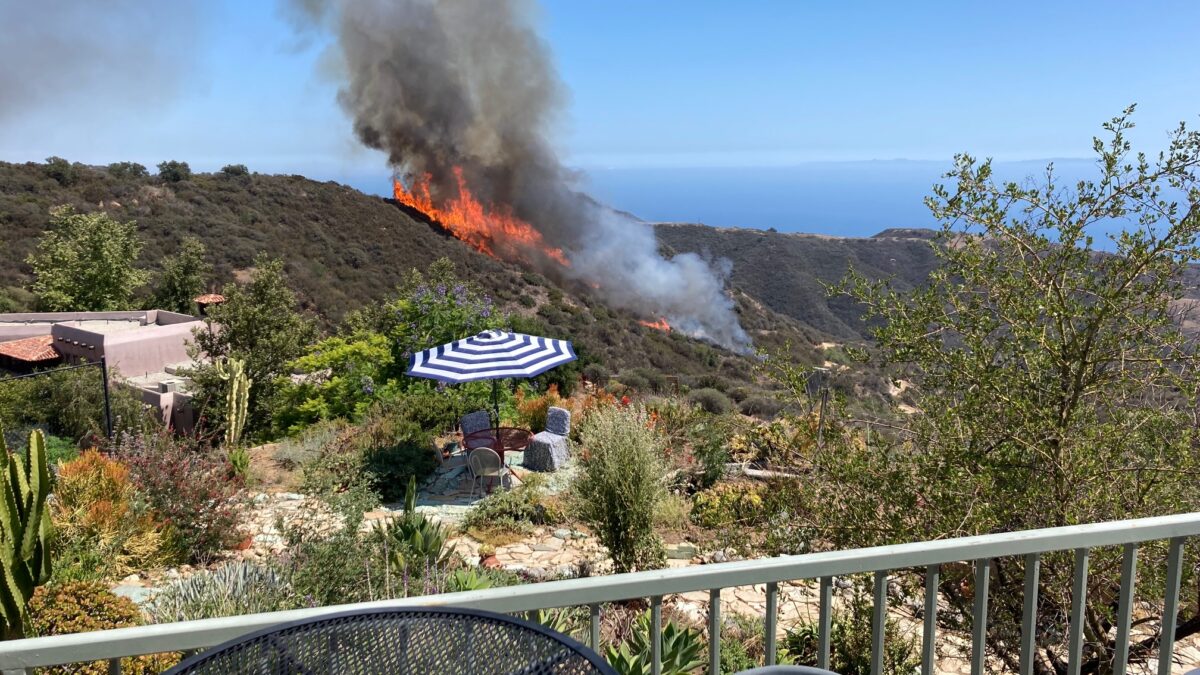 Topanga resident Geoff Sheldon took this photo of the Flores Fire from his home. The 15-acre blaze burned perilously close to houses in the Saddlepeak area and raised numerous questions about the short term rental property where the fire is thought to have originated.
NewsBeat

Fire in the Mountains

Topanga and Malibu had close calls with fire last week. The Flores Fire on July 19, named for Little Las Flores Canyon, was the second fire in the Tuna Canyon area this month, and this time, it burned perilously close to structures.

Helicopter news camera footage captured by KTLA 5 shows what appears to be the ignition point of the fire on a property with a tipi and an Airstream trailer. The AirBnB listing for the property, which advertised multiple upscale rentals each with a fire pit, was promptly pulled from the internet, but not before public scrutiny was focused on the property and the short term rental company.

More than 200 firefighters battled the fire with fixed-wing air tankers and helicopters and ground crews. The aggressive firefight helped hold the forward progress at 15 acres, despite dense brush and steep terrain, and it was 69 Bravo to the rescue again. Simon T, the helistop’s benefactor, shared that at least five helicopters pulled over 41,000 gallons of water from 69 Bravo in the first two hours of the fire, beginning at 2 p.m. The final water extraction total was over 80,000 gallons to help contain the fire 100 percent.

“The helicopters were the New Chinook 47, two LA County Fire Hawks, one LA City Agusta 139 Helicopter, and the new Ventura County Fi,” he shared with the Topanga New Times.

The Floresfire was the second incident in Tuna Canyon this month. Los Angeles County Fire Department representative Drew Smith has confirmed that the July 9 five-acre Tuna is believed to have ignited at a transient campsite.

The two Tuna Canyon incidents highlight the extreme high risk of open flames, regardless of the source.

The Malibu Civic Center area also had two recent brushes with fire, one incident on July 16, a second on July 20. Both fires started in a transient encampment under the Malibu Creek bridge in Malibu Lagoon State Park. Malibu Times photographer Julie Ellerton captured photos of propane tanks stored within feet of the blaze.

At a recent Facebook live event, Los Angeles County Sheriff Alex Villanueva stated that the high fire risk situation was not going to improve until the issue of illegal campfires is addressed. He described campfires as a “flashpoint in the WUI,” and stated that addressing the issue is a priority. “We have to make sure to clear encampments,” he said.

However, the sheriff is also on record blaming the Los Angeles County Board of Supervisors for failing to prioritize fire safety. “Remember all the patrols in unincorporated communities are funded by the Board of Supervisors,” he said. “They’ve decided to defund your public safety and security. They need to hear from you.”

Malibu’s city council is grappling with a streamlined nuisance law to make it easier to remove fire risks like illegal campsites, but enforcement remains an issue. Vigilance is currently the only effective measure. Quick reporting and response helped prevent all of the recent fires, including the potentially catastrophic Palisades fire, from spreading into neighborhoods. However, none of the recent fires were wind driven. County firefighting officials caution that once the Santa Ana winds arrive, the risk will increase exponentially, and with major fires burning throughout California and the West, resources are going to be stretched thin.

There have been so many fires already this year in the Santa Monica Mountains that we felt we needed to make a list to keep track. We counted 10 so far:

July 10: Lower Topanga Canyon. Cause: illegal campfire. Suspect was arrested and told sheriff’s deputies that he lit the fire to heat food.

July 18. A repeat of the July 15 fire situation. Both fires were reported by the same nearby gallery owner who happened to be one of the volunteer firefighters who helped save homes during the Woolsey fire.

July 19: Flores Fire, 15 acres. Cause: alleged to be a fire pit at a private short term rental campsite.