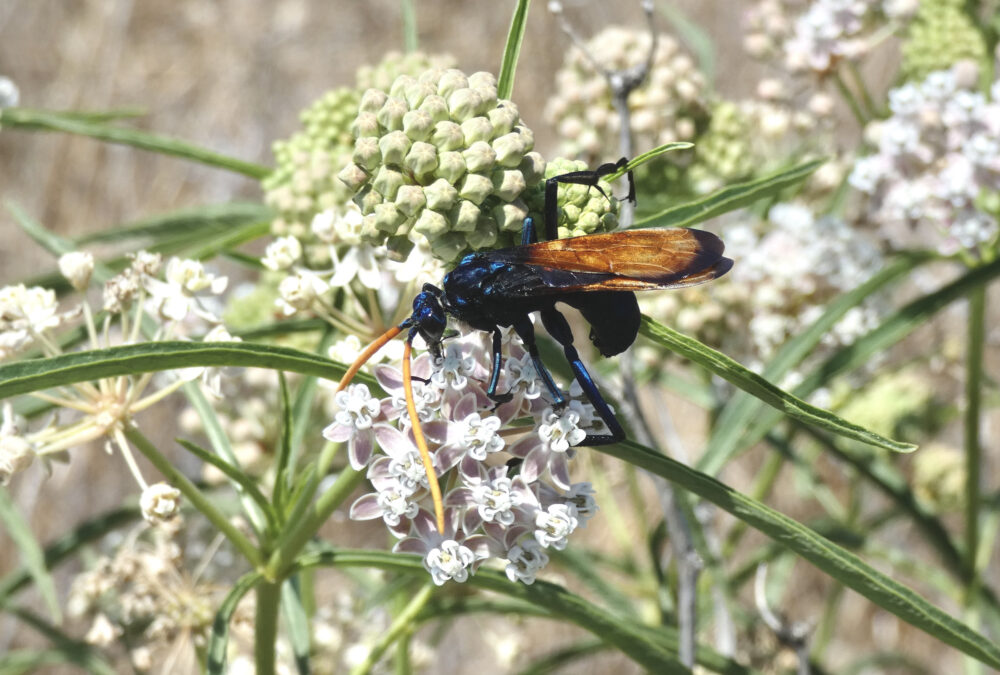 Milde’s tarantula hawk (Pepsis Mildei) is beautiful, with vivid orange wings and a metallic blue body. This is a male. He has straight antennae that can’t curl and he also doesn’t have a sting. The female is larger, has jointed antennae that can curl and she has a legendary sting that she uses to subdue tarantulas. Photos by Suzanne Guldimann
Feature

Tarantula vs Tarantula Hawk: The Miniature Monster Movie in Our Backyard

The tarantula hawk has a fairy-like beauty—metallic blue-body, brilliant orange wings. Males are peaceful, they spend their short lives as an adult sipping nectar from milkweed flowers and seeking a mate. Female tarantula hawks are ferocious warriors, armed with a sting that has been described by biologist Justin Schmidt, creator of the Schmidt Pain Sting Index, as “blinding, shockingly electric, a running hairdryer has been dropped in your bubble bath.”

She needs that sting because she really does prey on tarantulas, subduing these giant spiders with that fearsome weapon, before dragging her victim underground, where she lays her eggs in the doomed arachnid. It’s a scene straight out of a monster movie like Alien.

Fortunately, the tarantula hawk saves her sting for its intended victim. It’s rare for humans to be stung, and that’s good news, because from August to October, tarantula hawks are on the wing, their life cycle tied to that of the giant spiders that sustain them.

Female tarantulas live almost their entire lives underground, safe from threats like tarantula hawks, but males migrate every summer, seeking a mate. The annual tarantula migration usually peaks in September but the spiders travel great distances, and can be spotted out in the open throughout summer and autumn.

Tarantulas are long-lived. Males mature at around seven to eight years of age, although they rarely survive their mating migration. Female tarantulas can live to be 25, and there are accounts of captive California tarantulas surviving to 40.

Tarantula hawks live for only a few months in their adult wasp form. The male dies after mating; the female, after she has laid her eggs. The larvae will grow to maturity in their spider nursery underground, before hatching to start the cycle all over again—a weird and macabre horror story that plays out in our backyard every year.

Despite their sting and alarmingly large size, tarantula hawks are not a threat to humans. Stings are rare. The native tarantulas of the Santa Monica Mountains are also harmless, although their hairs can detach if the spider is handled roughly and may cause a skin irritation.

Canyon residents can help protect tarantulas by slowing down and watching for the spiders on the road and trail, and by avoiding toxic pesticides in the garden and around the house. We keep an empty waste paper basket and a stiff piece of cardboard handy to safely relocate any tarantula that attempts to migrate through the house. Tarantula hawks can be safely removed the same way. Males have straight antennae and no sting; females have jointed antennae that can curl and the sting is visible on the back of the abdomen.

Tarantulas and tarantula hawks are part of the unique ecology of the Santa Monica Mountains, as much a part of late summer and early fall in Topanga as hot weather and coastal fog.

We Cool You Off!