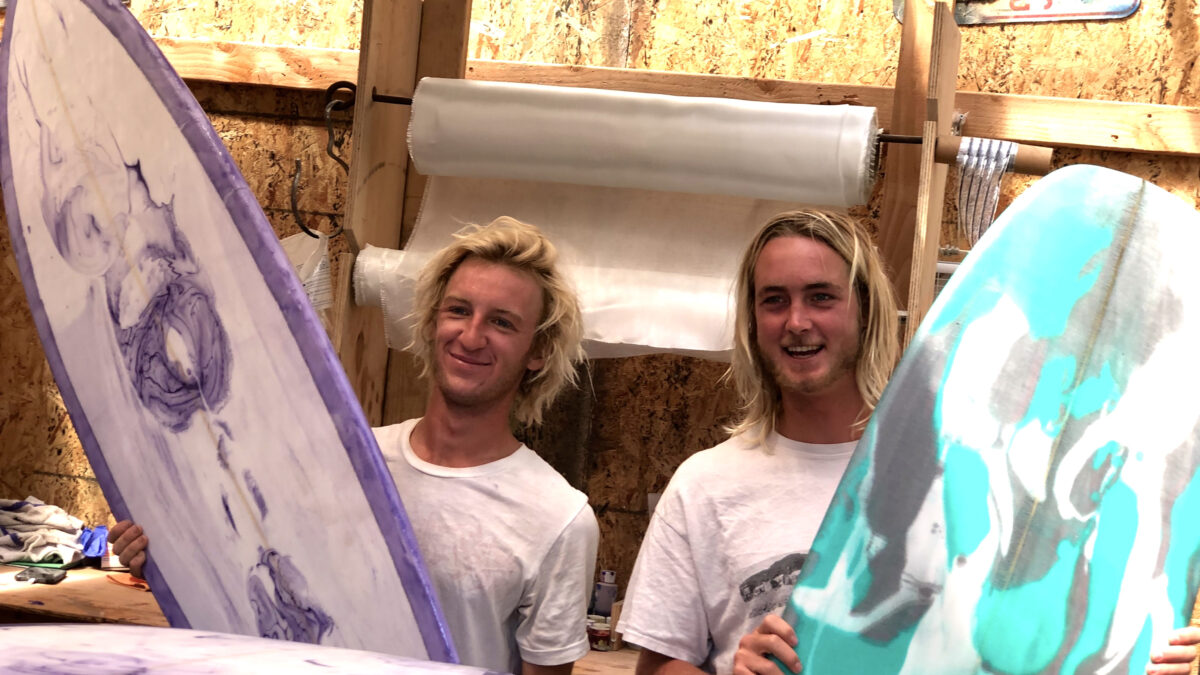 Truey Riese and Mo Magee pose with two of their recent creations in the glassing bay of their Topanga surfboard workshop. Photo by Raena Riese
Feature

One of the greatest draws to living in Topanga Canyon is the quick, six-mile or so, zip down the boulevard to Topanga Beach, which comprises over a mile of ocean frontage and 21.5 acres. On a typical morning, gulls squawk as the flag is raised at the lifeguard station. The white noise of ocean roar drowns out the commotion of highway traffic. A skinny-necked white egret wades in a tide pool near a guy doing pushups in the negatively charged ions of ocean spray. Dolphins put on a show, breaching and submerging in shiny black arches. The power of the sea is palpable. Surfers straddle their boards watching the horizon, waiting for a wave.

Our beach has a classic point break, where a swell wraps around a protrusion of land and peels along the shoreline (breaking to the right, when you’re facing the shore) in a long, well-formed wave. Waves closer to the point break are faster and walled up, good for short board action. Nearer the beach the waves are slower and softer, nice for longboards. Local surfer Michael Anapol defines sections of the potential ride as 1) from the point break by the creek to the palm tree, 2) from the palm tree to the lifeguard station, 3) from the lifeguard station to the edge of the cove, and 4) from the edge of the cove to the stoplight. “The cove,” he adds (it stretches to Maestros) “is a less intimidating section for beginners to practice in.”

Permanently tanned, Michael Anapol has been surfing locally since the seventies, when he’d skateboard barefooted with surfboard under arm from Bundy Drive in Brentwood to Will Rogers State Beach – eating breakfast at Roy’s (now Patrick’s Roadhouse) – coffee, potatoes and toast for 35¢.

Destined to be a lifelong beach bum and pro volleyball player, Anapol’s daily regime evolved to include a 3.5 mile beach run, surfing and playing volleyball from 7 a.m. – 7 p.m., and watching the sun set over the Pacific every night.

Back then, surfing Topanga often involved fights over territory (Go “Valley,” go home) and etiquette violations—some “Barney,” dropping in downwave after somebody already took off from the point.

Michael misses seeing fish swimming by in the clearer water of yore, and the magic-art-science of predicting wave conditions. “You didn’t know, and that was the greatest part of the adventure,” he says. “If you hit it right, you could go out and find yourself alone with great waves. Now everyone can check the live cams of 12 surf spots on their phones. There’s nowhere people don’t know about.”

What does a beach bum want to be when he grows up? A beach bum. After an illustrious career path, Michael’s current title is Guardian of the Malibu Pier, a badge-wielding salt-air breathing position with the California State Parks – perfect for Michael, who is fluent in all things “surf.”

“Topanga is my home beach and when it’s good, it’s really good,” he says. “If there are waves, girlfriend, wife, job, all take a backseat.”

Gary Dannenbaum has surfed Topanga Beach from the mid 1970s to the present. Born on the Gulf coast, Gary was 15 when his family moved to Laguna Niguel and he was put in San Clemente High School, where surf culture was strong.

“If you don’t ditch school to go surfing, you’re not really a surfer,” Gary says. He moved to Venice Beach, which he found to be hyper-urban and clique-y, with a thuggish undertone.

“They were all fighting over mushy waves, fighting over these man made beaches that stretch from the Palisades to Palos Verdes,” Gary says. “When I found Topanga Beach, it was an exotic, tropical locale, with mounds of bougainvillea and an unpaved parking lot of dirt and broken beer bottles.

“There was a funny old lifeguard building on stilts with a pipe coming out of the ground for a shower.  The houses that were here really dominated the beach,” Gary says pointing to pilings that used to be part of a deck. “The place was more ‘private’ then, or tried to make you think it was.  And the waves were really good. I went up to one of the houses and asked a guy, ‘Excuse me, can I borrow one of your surfboards?’

“Out of politeness I surfed right in front of his house.  Topanga had a druggy, hippy vibe in contrast to the Venice ‘I’ll steal your bike and beat you up’ vibe. That’s why we [Gary and his wife, Karen] moved here.”

“We’re one big dysfunctional family out there,” Dannenbaum jokes, spoofing the guys at the lineup. “Hey bro, whydja snake me?”

“Well, if I was your bro I wouldn’t have, sooo I guess I’m not really your bro, bro.”

Gary reminisces about a 200-yard ride he caught, from the point to the stairs (in the cove). “There is nothing like that feeling.”

“Topanga Beach—I call it Malibu’s uglier little sister—is not as predictable as Surfrider, not as perfect. But Malibu breaks only in summer. Topanga breaks all year round. Some people think winter’s even better.”

The next generation of Topanga Beach surfers is epitomized by local entrepreneurs Mohammed “Mo” Magee and Trudaux “Truey” Riese, both barely twenty. Avid surfers, Mo first got on a board at around age 8; Truey at 12 or 13, shortboarding in the morning before school. Now they build custom surfboards in Topanga Canyon, having rigged both shaping and glassing bays in the backyard.

Considering a client’s height, weight, skill and desires, Truey and Mo plane foam blanks into streamline works of art; swirling and tapping resin pigments into sick designs. Fiberglass hot coats ensure boards are watertight. Personal craftsmanship and mojo go into every board under the logos IceGoat and CosMo.

“This is what happens when you’re homeschooled and your mother says ‘go with all your wildest passions in life,’” notes Raena, Truey’s sister.

“Anytime you walk into the Topanga Beach parking lot, if you need anything ever, it’s there,” says Truey. “If you forgot your wallet and need $5 to grab some gas before heading up the canyon, you’ll see one of your boys there who will help you out. It’s definitely a very tight knit community down there.”

“It’s definitely unique—to be in LA and to have a place where different generations can come hang out together and have a day is something special,” Mo says. “I feel fortunate.” “It’s awesome,” Truey adds.

“I’ve watched Truey and Mo grow up in the ocean,” says Carolyn Day, who is happy to spend 30 hours a week in the water if she can; forsaking housework, journalist interviews and menial inland distractions for the chance to surf.

“When the swell is high, the laundry pile is high,” she says. “I just pulled the kids out of school to surf. The ocean was providing the best waves in the last year and a half.” Carolyn is a retired stuntwoman and circus acrobat. She learned the requisite balance for surfing on the balance beam as an elite gymnast; and was trained to stand on cantering Clydesdales, the closest feeling on land to surfing. She lives in Topanga Canyon with her kids and husband, local surfing legend Donald Day, NSSA 1999 National Champion, a sponsored surfer.

Carolyn is often one of two women surfing with 40 – 80 men. She navigates around them while honoring her own relationship to the ocean. “Men are on a buffalo hunt,” she says. “There’s no opportunity for that in the modern world.  Their survival instinct gets triggered when you mix adrenaline, testosterone and a limited resource—like a big wave. Lesser surfers want to hunt bigger buffalo. They all battle for the dominant position.  The bigger the wave, the more conflict you see. If 80 women were out there to catch waves, we would find a way to allocate resources according to ability, encouraging lesser surfers onto more appropriate waves—so they didn’t get hurt.”

Carolyn participates in the Malibu Boardriders Club to promote environmental stewardship, mentor youth from underserved communities, and teach surfing to special needs individuals as a vehicle for healing.

Rising seas from global warming could erase Topanga Beach. Carolyn is also concerned about a more immediate risk to the beach-going community: a service road that has eroded to the point that rescue vehicles cannot be used there. So rescues would have to be done on foot—making it impossible for only one lifeguard to handle an emergency like a spinal injury or broken leg without finding a citizen to help.

Advice from local surfers: Conditions are fickle, so bring layers to go over your bikini. Under the wave is cobblestone and sand, so wear booties. Every scrap of trash will likely wind up in the ocean eventually, so pick it up. Enjoy the lulls. Stay stoked.

Anybody who wants to add a custom board to their quiver should contact Mo and Truey through Instagram (@Cosmostarships and @IceGoatSurfboards.)