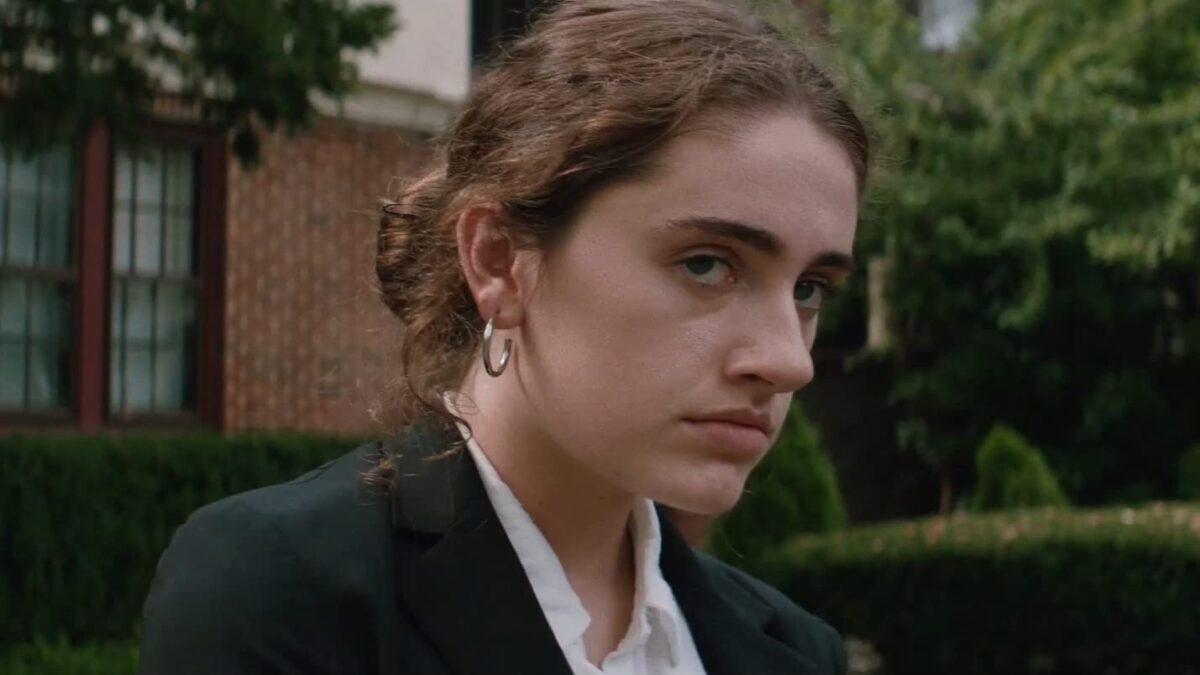 Rachel Sennot, as Danielle. “To like, have power, and be, like, appreciated.” Shiva Baby, 2021. Written and directed by Emma Seligman
ArtBeat

Emma Seligman’s ‘Shiva Baby’ (2021), is a current and juicy “comedy” with humor that will set your teeth on edge, rather than provoke light-hearted giggles. The film’s score, by Ariel Marx, is reminiscent of that of a horror movie. The music conveys to viewers that the situation is high-stress, and anxiety will continue to build. The film does not disappoint.

Shiva Baby opens with a sexual encounter between a young college student, Danielle (Rachel Sennott), and a man who looks to be in his late 30s (Danny Deferrari). Right after intimacy, Danielle gets dressed and prepares to leave the man’s apartment. It is clear that their dynamic is tainted by professionalism, and they seem somewhat removed from each other. The encounter is soon confirmed to be transactional after Danielle awkwardly reminds him to pay her before she leaves. Viewers are left to deduce that the man is Danielle’s sugar daddy (a financially-generous older man who showers a younger individual with gifts and payment in exchange for sexual and/or romantic favors).

We follow Danielle as she meets up with her parents (Polly Draper and Fred Melamed). She goes with them to a family friend’s house for a shiva, which is a week-long mourning period in Judaism after a funeral. Typically, during shiva, the bereaved family stays home while their friends and other family members come over to the house to provide comfort and express condolences. The witty title of this film, “Shiva Baby,” is meant to play on the phrase “sugar baby” (the counterpart to the term “sugar daddy”).

At the shiva, it is clear that Danielle is uncomfortable and overwhelmed. Relatives approach her from all sides and ask the same questions about college, relationships, and weight loss—family members are seen speculating about whether Danielle has an eating disorder, since she’s “lost so much weight.” Danielle also runs into her ex-girlfriend, Maya (played by Molly Gordon). Danielle is competitive and hostile toward Maya; their dialogue is fiery, filling the scene with the chemistry of either unresolved feelings or deep issues with one another.

The stakes of the situation are raised even more, when, from across the room, Danielle catches the eye of Max, her aforementioned sugar daddy. As her mother rushes to introduce Max and Danielle, hoping to put her daughter in touch with someone who (ironically) could offer her some sort of job opportunity, Max finds out that Danielle is not actually a law student, but that she’s instead majoring in gender studies, and has no clear plan for her future. Her parents also reveal, unintentionally, that they support her financially, so Danielle is not really in need of a job. Viewers are left to wonder why she chooses to have sex with Max for money if she doesn’t need to support herself.

Danielle’s afternoon becomes one of terror, as she’s surrounded by too many nosy relatives, Maya, and Max, whose presence threatens the discretion of her current job (which everyone thinks is babysitting). As the night proceeds, Danielle learns shocking things about Max that provoke a variety of new feelings in her; all the while she attempts to dodge questions and suspicion from family members—and Maya. The film gives a feeling of claustrophobia, as we continue to follow Danielle around the house, through tight-knit clusters of people, probing questions, and waves of conflicting emotions. There are times when the cinematography suggests a bit of insanity, as if Danielle is “losing it.”

Throughout the movie, Danielle’s relationship with food is unclear. Her family attempts to get her to eat, and they suspect she’s anorexic. Throughout the shiva, we watch Danielle pile food onto her plate, and then scrape it back into the serving dishes on the table, untouched. At other points in the film she eats freely—seemingly, without a second thought. At one point, Danielle’s mother offers her a lox bagel, and Danielle says she’s vegetarian. Later in the film, she is seen eating meat.

The inconsistency in Danielle’s character is unsettling, but not unintentional. It is difficult to tell whether she’s extremely careless or incredibly calculated. The cloud of stylized disorientation this film creates is phenomenal. Though the exact motives and thought processes of the protagonist seem unclear at times, the combination of Emma Seligman’s writing and directing, and Rachel Sennott’s acting, produces a potent and exciting air that lingers long after the short, 1 hour and 17 minute film.

Near the end of the movie, Danielle is asked why she does it (why she chooses to be a sugar baby), to which she replies, “I wanted money, and it was easy…Felt nice to, like, have power, and be, like, appreciated.” Many young people today can tend to feel a lack of power over their lives, and Danielle’s character speaks directly to that. Taking control of your own finances at a young age, regardless of whether you need to, can make you feel in control, and powerful. As can owning your sexuality and using it to your advantage. Eating disorders can also come from the desire for control—refusing a necessity like food can easily give the illusion of power over oneself.

Though Shiva Baby is loaded with heavy subject matter, the film deals with it in a somewhat light-hearted, and deeply entertaining way. Danielle’s character exposes the struggles and angst, specific to her generation, when confronted with family expectations and traditional values. The film highlights that difficult place between youth and adulthood through the lens of modern society, and Sennott delivers Seligman’s raw and honest script, flawlessly.

William Pereira: The Architect of Yesterday's City of Tomorrow

Nights of the Jack