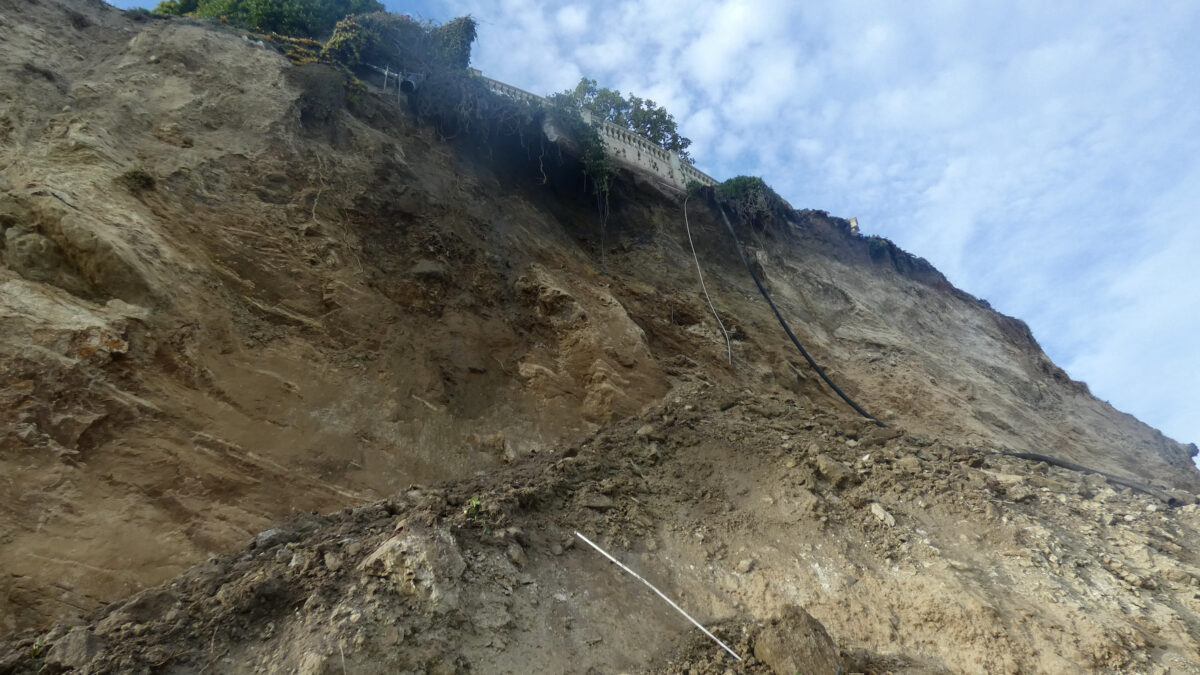 A rock slide on the beach in Malibu on November 1 sent tons of rock, debris and an entire section of landscaping complete with trees, plummeting onto the beach below. This isn’t the first slide in the area. The landscaping that collapsed is part of a clifftop property perched on a small headland that is constantly exposed to erosion, but it is an uncomfortable reminder that beaches and cliffs all along the coast are experiencing accelerated erosion due to climate change. Photo by Suzanne Guldimann
NewsBeat

The scatter of rocks along the tide line was the first sign something was wrong. The tree was the second sign. One doesn’t often find a fresh pine tree— roots, trunk, green branches—on the beach. And then, there was the rock slide itself.

My first thought was, “Well, that’s not very big.” It takes a moment for the full scale of the collapse to register: Boulders the size of household appliances; tons of rocks, pebbles and topsoil, two trees, an assortment of shrubs and heaps of ice plant, irrigation pipes dangling uselessly on top of the mess.

An elegant Italianate balustrade was still somehow on top of the cliff, but badly undercut. A hazard for another day, or hour. Not a good place to stop and take photos, not even for a journalist. I’m glad no one was underneath when the rocks came down. I moved away quickly, uncomfortably aware of the danger.

Engineers from the city of Malibu, Los Angeles County Beaches and Harbors and State Parks assessed the slide and closed the beach later that day, over concerns that the slide was still potentially active. The garden on the bluff top was red tagged. The house, located further from the cliff edge, is reportedly not at risk, but the situation is still being assessed.

This wasn’t the first rockslide at this site. The property is located on a small headland that is constantly experiencing erosion, even without the added threat of sea level rise. The rock that forms the dramatic cliffs along this section of the local coast is soft sedimentary material that is heavily faulted and folded. It’s an impermanent foundation for some very expensive real estate. This oceanfront house just got about ten feet closer to the ocean. Given enough time, wave action and the geologic process called “mass wasting” will wear away the rock entirely, but it’s strange to see the process of erosion at work. This time it was about 10 feet, 10 tons all at once.

“Safe upon the solid rock the ugly houses stand: Come and see my shining palace built upon the sand. —Edna St. Vincent Millay