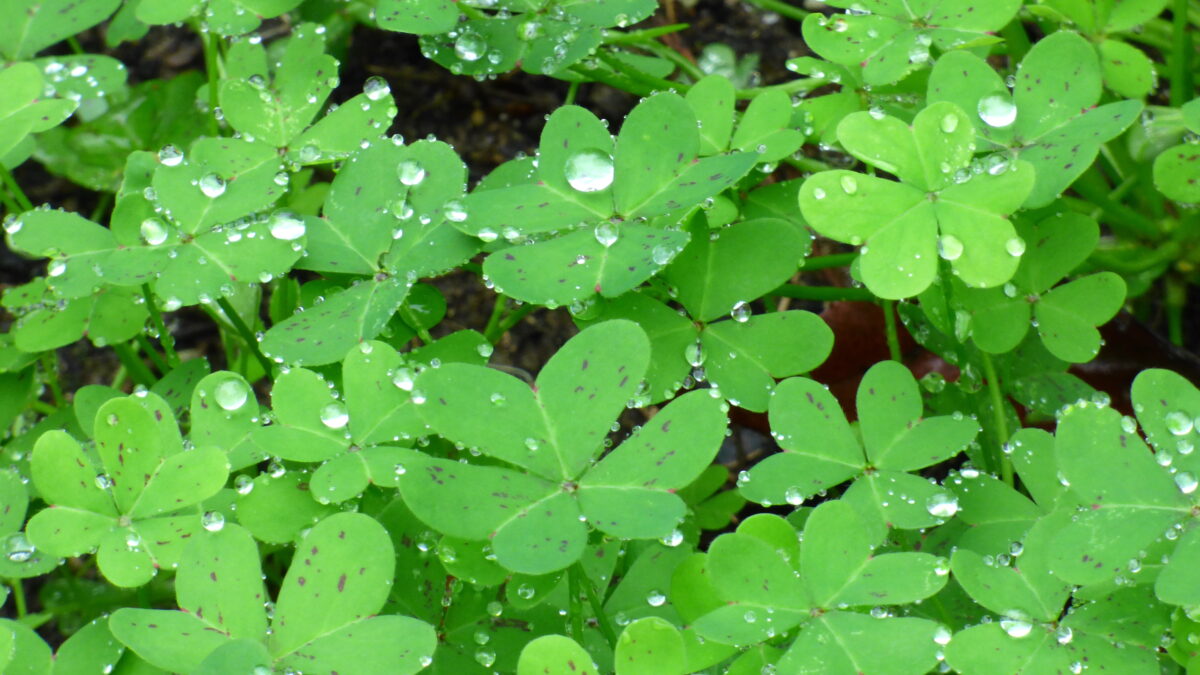 The clover-like leaves of Oxalis have high levels of oxalic acid, which protect the plant from deer and rabbits. Oxalis is edible in moderation, and children love to chew on the juicy, sour flower stems, but too much can cause digestive problems in humans, and can be fatal for livestock. Photos by Suzanne Guldimann
Discover

All along lower Topanga Canyon Boulevard, and in almost every garden from Malibu to Pacific Palisades, the fluorescent yellow flowers of Oxalis pes caprae bloom from a carpet of clover-like leaves. The blossoms are so bright they almost seem to glow. Look at them in the sun for too long and that vibrant yellow leaves a violet after image on the retina for a moment.

Oxalis goes by a lot of names: Bermuda buttercup—although its not from Bermuda and it isn’t a buttercup; goat’s foot oxalis—the English version of its Latin name; and sour flower, for the oxalic acid that gives it the other half of its Latin name and also its sharp, lemony flavor. Whatever one calls it, Oxalis is always one of the earliest flowers to bloom after the first rains of the year, and it seems almost entirely immune to frost and the depredations of deer and rabbits. It’s not a native. This energetic invader arrived in the Santa Monica Mountains from its native South Africa in the early 20th century. A 1947 nursery ad in the Malibu Times offers the earliest mention of the plant in the local area. Here’s a quote:

“Do you have a spot in your garden where flowers do not grow? Is there a place under a tree where the roots occupy all the available soil? Is there a narrow space between the walk and the wall where weeds persist and other flowering plants fail? If these are problems, scratch up whatever soil you find in your garden and push in some oxalis bulbs. They will surprise you!”

Surprise is an understatement. Oxalis has not only thrived, it has conquered, spreading like green fire throughout the mountains. The California Invasive Plant Council classifies this plant’s  potential impact on native ecosystems as moderate, and so far, it tends to stay near human habitation.

It’s a relatively well-behaved invasive species. It only grows during the rainy season, vanishing quickly when the soil dries out. It’s low-growing, decorative, and like that old ad promised, it thrives in shade where other plants won’t grow. It’s also mercifully free from thorns, prickles, or deadly toxins, and it’s even edible in moderation. The sour taste makes it a favorite with children, who like to chew the flower stems, and it’s a pretty addition to salads, but it can cause stomach upset in high concentrations.

However, when oxalis crops up where it isn’t wanted, getting rid of this colorful pest is almost impossible. It has two highly effective ways of propagating: corms or bulbs that grow in profusion from the plant’s succulent root and store nutrients and moisture that give the plant a head start after the first rains arrive; and tiny seeds that are catapulted far from the parent plant by spring-loaded capsules. Once it turns up in the garden, it stays there.

There are a few native oxalis species in the Santa Monica Mountains: Oxalis californica, or California wood sorrel is one, Oxalis albicans, hairy wood sorrel, is another. They are far less common than their non-native relative. Although they can both be mistaken for O. pes caprae at first glance. Unlike the invader, they belong here. There are no easy solutions for the problems raised by invasive plants. Just like the humans who brought them here, they are here to stay, regardless of their impact. The golden flowers of Oxalis pes capris appear so quickly, bloom with such dazzling brightness, and vanish so completely that it’s hard not to be delighted by them. This is a magician’s trick of the first order: living gold that appears as if by magic and disappears again without a trace.