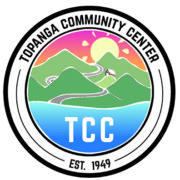 At the one-year quarantine anniversary we wanted to take a moment and highlight what makes this community, and the Topanga Community Center (TCC), so special.

When we first learned of the lock-down and safer at home order, the TCC realized that many of the people we work with on a contract basis would lose income when we had to shut our doors. As we projected our own loss of income, we knew we could still responsibly manage the TCC and support our team members. We have remained dedicated to paying our regular contractors their average monthly income since we have been closed.

We didn’t know what to expect from the safer at home orders, but we knew we needed to act in some manner so we reached out to our members and created a grocery support network. Individuals signed up to bring groceries to neighbors who were homebound. Within a week of putting out the call for people to sign up for help and to help we had 100+ people sign up to help and 70+ asking for assistance. It was amazing to see this kind of response from the community!

Starting in late March, Kristina Rocco Levy began providing delicious meals, three times a week, to Topanga’s homebound seniors. Our amazing volunteers (a number of them who also signed up to do the grocery runs) have been driving these meals to individual homes throughout the entire pandemic. Once this is all done, we plan to have an event at the TCC to honor everyone and all the hard work they have put in.

As April came and we were still in lock down, Easter was right around the corner. Our traditional Egg Roll had to be suspended, but that didn’t stop us from organizing cheer. The Easter Bunny drove around Topanga’s neighborhoods waving at children, bringing joy while still maintaining social distancing.

When May rolled around and the TCC read the L.A. Times article about the impact COVID and lock down was having on the mariachi industry, we jumped into action and hired one of LA’s (amazing) mariachi bands to bring you – DOS DE MAYO! And little did we know- nothing said fun quite like Dos de Mayo did!

In May, we also wanted to do something to help the cause. We reached out to the American Red Cross and became a blood donation site. Throughout the quarantine we have held three blood drives, donated 150 units of blood and 10 units of Power Red blood (which is the only blood that can be used for burn victims and children with cancer). The American Red Cross has made us a premier site! Given that our local hospitals have run out of blood several times during this pandemic, this is no small feat. At the most recent drive, in March 2021, the American Red Cross set the lofty goal of having us get 48 units of blood. We were able to provide them with 55 units of whole blood and 5 units of Power Red.

In June, we helped the Topanga Elementary Charter School parents safely put on Topanga Elementary Graduation for the 5th grade students. It was a beautiful drive-thru graduation, with support from teachers they hadn’t seen in person for months and balloons to welcome them. Many in the community came out to show socially distant support for our local school students as they transitioned to middle school (who knew they would be Zoom learning from their homes for the next year!?)

As effects of the pandemic continued, a generous grant from LA County helped us serve those in our community facing food insecurity. This continued for most of the summer. The grant, issued through the L.A. County Development Authority, allowed us to work with three local restaurants so that we could help businesses and residents combined. Meals were available three days a week at the Topanga Library. The delicious, nutritious, meals provided by Rocco’s Cucina, Waterlily Cafe, and Cafe 27 sustained many in Topanga with food insecurities caused by the pandemic. We estimate we served more than 279 families over the course of the program. This program was a display of some incredible collaboration within our community, and we are grateful to be able to provide the resources to serve so many in need.

During the summer, we hosted a socially distant Food Truck Friday with a small, but delightful turn out. We also started Drive-In Movie Nights at the TCC. If you’ve never been, you really should make time to go to one. They are very magical nights.

Throughout the pandemic, we maintained our monthly Canyon Sages dinners. It was no longer the delightful social gathering we once knew and loved, but delicious (and nutritious) meals from Rocco’s Cucina were delivered to our wonderful Sages’ homes.

In October, we talked about turning the TCC into a drive thru haunted house, but time went too fast. We know it didn’t happen, but we feel the thought should count (and in fairness a large amount of planning went into it —but again, time got the best of us).

In October/November we became a polling place and – this may be vain to say, but we had the best “I voted” stickers.

In December, we put on a drive thru Holiday Extravaganza! Complete with fake snow! Santa and Mrs. Claus showed up to give out adorable gift packages of hot chocolate. We even broke our own rule not to allow dogs on the property just so Max (and the Grinch) could show up.

In January/February, we put on a Scavenger Hunt with prizes! It was a fun way to get people outside and engaging with their neighbors in a socially distant manner.

Throughout the pandemic, Topanga Youth Services (TYS) has pivoted with quite a few activities on Zoom with some fantastic guest instructors. These included some very fun Radio Plays, a virtual Talent Show, cooking classes, playwriting, an online band, dance, singing, monologues and creating short videos! They had to postpone their rehearsals and performance of Fiddler on the Roof, but look forward to resuming where they left off, on our newly improved stage, once it is safe to do so.

In addition, we are planning our next Easter surprise, a return of Food Truck Friday, and more.

In the midst of all the fun activities, we’ve also been working on cleaning up and renewing the TCC. Who knew that a year without interaction would not only harm people, but also our playground? We have been working hard to repair extensive damage to the structures and get it into working order. The TCC House has undergone a significant renovation to the stage, with upgraded lighting and audio equipment that will enhance the experience for audiences when we are allowed to return indoors. There is new hardscaping around the property, and the garden has been cleaned out and plots have been divided up so TCC members can have their own little plot of land! We hope to get gardeners into their spots before the end of the month.

Our “Topanga Gold” LA Compost bin is also now operational again and is ready for composting.

In a year when everything feels as though so much has been lost, we wanted to recount all the things that have been done as a reminder of how much has also been gained. Yes, there were many things that were lost this year, but we have also worked together to pull off some very special events in this community. We have been honored to work with all of you to make the best out of this situation. The Topanga Community Center is a community supported non-profit organization run by volunteers. Learn more at https://topangacommunitycenter.org or on social media @topangacommunitycenter.