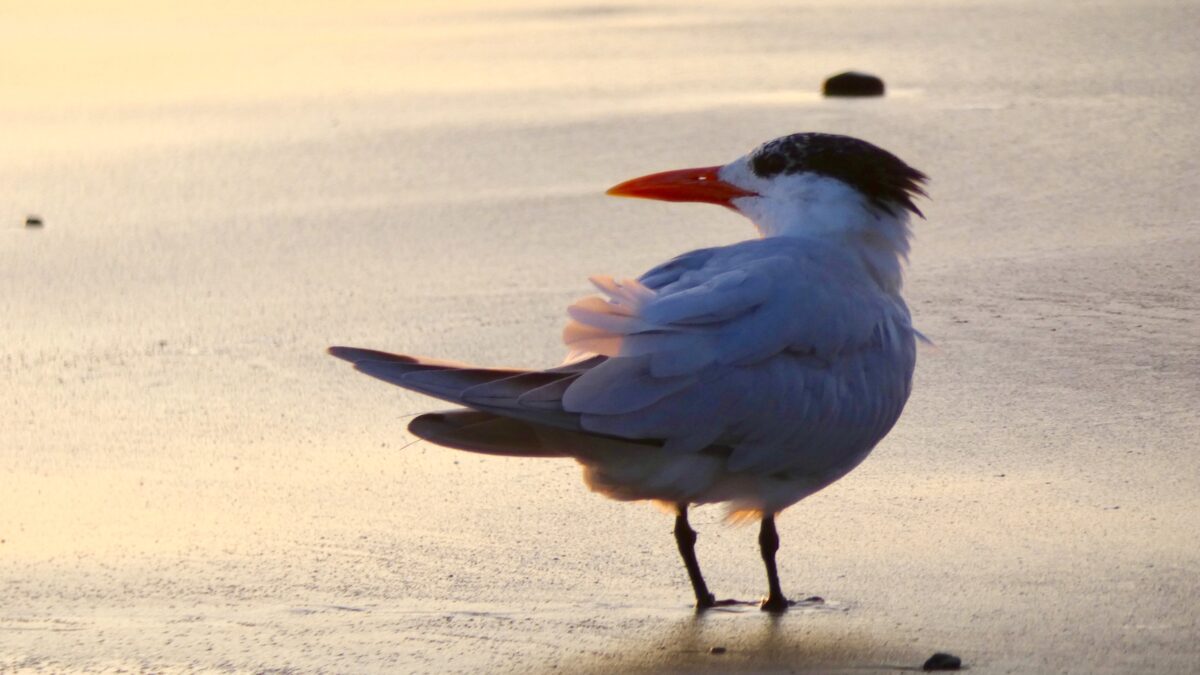 The local coast is the winter home to several species of terns. This punk rock bird is a royal tern, Thalasseus maximus, one of the great acrobatic divers of the bird world, plunging out of the sky into the sea in pursuit of small fish like anchovies, and somehow launching themselves back out of the water and into the sky again, seemingly in defiance of the laws of physics. All photos by Suzanne Guldimann
Discover

I heard a bird sing in the dark of December.

A magical thing, and sweet to remember.

“We are nearer to Spring than we were in September.”

I heard a bird sing in the dark of December.

The trilling reedy song of the wrentit rang through the garden in the still hour just after sunrise. Winter is a busy season for birds in the Santa Monica Mountains, and this isn’t the dark, cold winter that the poet experienced, but it was a magical thing, sweet to remember.

The tiny, long-tailed wrentit is a year-round resident. This is the fierce little bird that attacks its own reflection in the side mirror of your car, or peers in the kitchen window with miniature hawk-like intensity. Its distinctive song—a percussive trill of bright notes—is part of the soundtrack of the chaparral, but it spends its entire life in an area of just an acre or two, rarely traveling beyond the boundaries of its territory. No matter how small its range, in winter, the wrentit has to make room for new arrivals.

The winter solstice officially occurs on Tuesday, December 21, 2021 at 1:59 p.m., but with temperatures already dropping into the upper thirties at night in parts of Topanga, and rain finally in the forecast, winter is already here and so are the birds who spend the season in our mountains and along our coast.

Some, like the host of warblers who arrive in autumn, are only here for the winter. Others, like the American robin, stay through early spring, and may even nest before heading farther north. There are other visitors who are only here for a week or a day, resting on a journey that may take them as far away as the Southern hemisphere.

Winter residents include the yellow-rumped warbler, who makes a big splash at the backyard birdbath. It’s hard to miss the Western king bird, with its acrobatic aerial fly-catching maneuvers and loud whistle, but the arrival of the shy and retiring hermit thrush can easily be unnoticed.

At the beach, this is the time of year to look for the black oystercatcher, with its flashy orange beak and crazy comic-book-villain red and orange eyes, and an assortment of terns that range from the robust royal tern down to the tiny and threatened least tern.

A short walk around the King Gillette Ranch pond, or the Malibu Lagoon will often reveal an astonishing range of species this time of year. For songbirds, however, one’s own backyard may be the best place to look, especially if water is available.

Birds aren’t the only ones attracted to garden water features. Measurable rain fell this week for the first time since October, but not enough to replenish creeks and pools, leaving wildlife with few options for drinking water. That can result in backyard encounters. It’s a good idea to keep an eye out for wild neighbors and make sure that a trip to the garden isn’t interrupting a coyote or a mountain lion getting a drink at a convenient backyard pool or fountain.

Even with drought conditions and little rain so far this season, there are winter flowers. Chaparral current and wild cucumber are already in bloom. This week’s rain will help jump-start flowering shrubs like ceanothus, but it will take more rain than we’ve received so far to germinate the seeds of annual wildflowers like poppy and lupine, or revive dormant perennials like prickly phlox and Padre’s shooting stars, and the forecast suggests drought conditions will linger.

The full moon on December 18 will be getting in the way of another kind of shooting star. The upcoming Ursids Meteor Shower, which occurs from December 17-25, peaks on the night of December 21. A patient observer or an early riser who gets up before dawn may still catch a shooting star, but most of this year’s show will be drowned in moonlight.

Conditions are more auspicious for the Quadrantids Meteor Shower, which occurs from January 1-5 and peaks on the night of January 3, just after the January new moon.

The Quadrantids can be impressive, with up to 40 meteors per hour at the peak. The best time to look is after midnight and before dawn.

This winter is a quiet one for astronomical phenomena, but early risers will have a chance to see Mars in the predawn sky at the end of the month. The planet has been out of sight behind the sun for several months and will gradually grow brighter and closer throughout the year ahead. Look for the red planet to appear near the crescent moon and the red star Antarres in the constellation Scorpio just before dawn on the last day of the year. It won’t be spectacular—Mars is still faint and far away, but it’s still something to see: a celestial dance to mark the end of the year.

Winter is the season to watch for sunsets and migrating gray whales. It’s the rare season of solitude on the beach and on the trail, a time of clear skies at night with the constellation Orion overhead, and with any luck, a time of rain and renewal. We are closer to spring than we were in September.