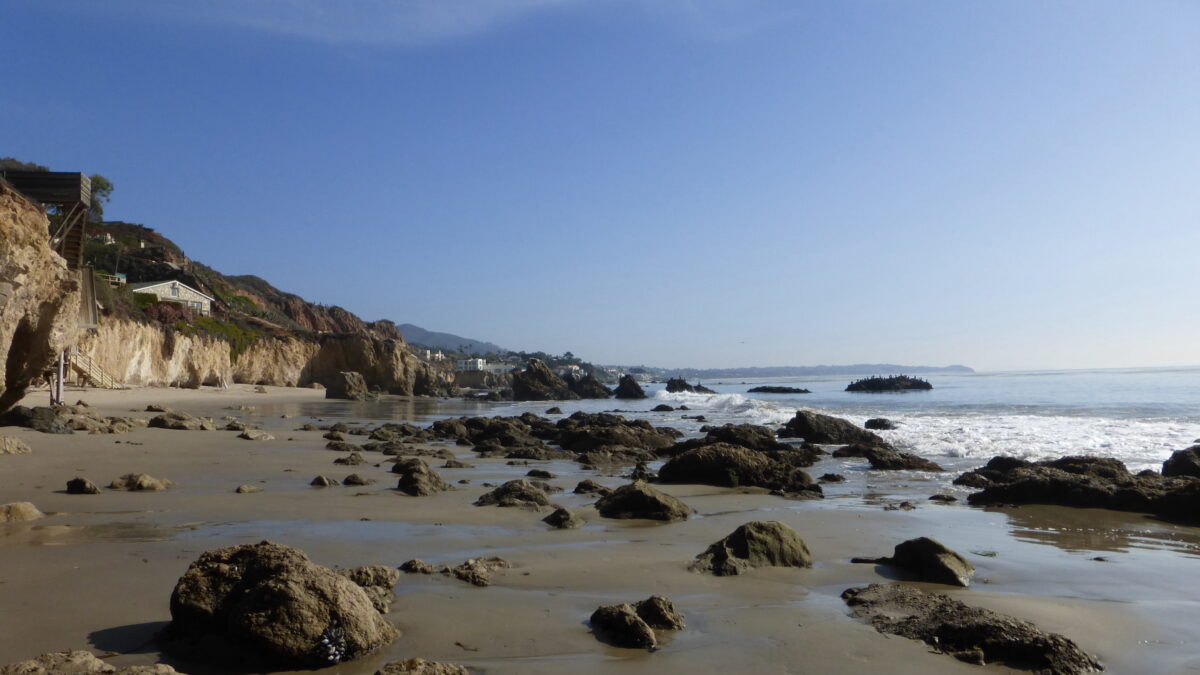 Joan Didion lived in a house overlooking this stretch of beach in Malibu for most of the 1970s. She wrote some of her most critically acclaimed books during those years, including The White Album. Photo by Suzanne Guldimann
Changemakers

Journalist, novelist, and screenwriter Joan Didion died on December 23, 2021. She was 87. Her writing is vivid, indelible, and sharp. Once read, her words stay with the reader.

“We tell stories in order to survive,” she states in the introduction to The White Album, her 1978 collection of essays. She invests her own stories with perception, wit and power.

Didion, a fifth generation Californian, was born on December 5, 1934 in Sacramento. She lived there for most of her childhood, except for a disorienting period during WWII, when her family pulled up their roots to follow her father from post to post while he served in the Army Air Corps.

Didion was living in New York and working for Vogue when she met and married John Gregory Dunne, an aspiring novelist who was working as a journalist for Time Magazine. The couple moved to California in 1964, ostensibly just for six months for Didion’s health. They stayed for more than two decades, and much of her most powerful writing is rooted in the culture of the state.

In 1971, Didion and Dunne bought a house in Malibu, just west of Broad Beach, yards from the ocean, and appropriately enough, rumored to have once been a secret gambling club. They lived there until 1978, moving to Brentwood to be closer to their daughter’s school just months before the devastating Mandeville Fire, which would burn to the sea just feet from their former home.

Didion described herself as a shy, bookish child, whose love of writing evolved along with her love of reading. Throughout her life she remained an outsider who was a keen observer, but rarely a participant. She has been criticized for placing herself into her writing, but that autobiographical filter gives her work an immediacy that even now, decades after the news stories she covered have been forgotten, makes them compelling. The reader feels the presence of the author, sharing a memory in her own voice.

That voice is often cynical (who else would describe the Doors as the Norman Mailers of the Top 40?) but it is also brave and authentic. Didion wrote about subjects so controversial they bordered on radioactive: hippie drug culture in Haight Ashbury in the 1960s; the Manson Family murders; and her personal struggles with mental health issues, including debilitating anxiety. Her writing challenged norms and helped change the discourse of American journalism. Later, she would write about coming to terms with grief following the death of her husband and her daughter’s failing health (The Year of Magical Thinking) with the same directness.

Didion has said that she was drawn to chaos. The title for her 1968 collection of essays Slouching Towards Bethlehem comes from Irish poet William Butler Yeats’ poem “The Second Coming,” which opens with the lines “Things fall apart, the center cannot hold.”

Didion’s writing—fiction and non-fiction—explores the unraveling of the social fabric, not to pass judgement or to promote an agenda, but from the perspective as an observer.

Didion was a prolific reporter, and one of the only women in the “New Journalism” movement. Her major novels and collections of essays are drawn from or informed by her work as a journalist during the turbulent 1960s and 70s. They remain a remarkable window into a psychedelic, paranoid, and disorienting chapter in American history.

There’s an apocalyptic dread running through much of Didion’s work that is rooted in part in California’s climate and fire history. “The city burning is Los Angeles’s deepest image of itself,” Didion writes in Slouching Towards Bethlehem.

“Los Angeles weather is the weather of catastrophe, of apocalypse. The unpredictability of the Santa Ana affect the entire quality of life in Los Angeles, accentuate its impermanence, its unreliability. The wind shows us how close to the edge we are.”

Didion’s White Album, written during the years the author lived in Malibu with her husband and their daughter, Quintana Roo, has special resonance for anyone who has ever lived in the area. She describes the small, insular community beneath Malibu’s artificial Hollywood glamor.

“We called one another in times of wind and fire and rain, we knew when one another’s septic tanks needed pumping. We watched for ambulances on the highway and helicopters on the beach and worried about one another’s dogs and horses and children and corral gates and Coastal Commission permits. An accident on the highway was likely to involve someone we knew. A rattlesnake in my driveway meant its mate in yours. A stranger’s campfire on your beach meant fire on both our slopes.”

It’s a description that still evokes the real Malibu.

“Malibu tends to astonish and disappoint those who have never before seen it,” Didion writes. And yet its very name remains, in the imagination of people all over the world, a kind of shorthand for the easy life.”

Even her reflections in the White Album on the rare and exotic flowers that are still grown at Zuma Canyon Orchids in Malibu are tempered by disaster. She describes how the original greenhouses burned in 1978. A poignant image that would repeat during the Woolsey Fire in 2017.

Didion moved back to the East Coast in 1988. She continued writing until 2011. Her work was influential in the seismic shift of the American consciousness in the postmodern era, and it helped put California on the cultural map as more than just “the other coast.”

“I think people who grew up in California have more tolerance for apocalyptic notions,” Didion told interviewer Barbara Isenberg in 2000 for a project called State of the Arts: California Artists Talk About Their Work.

“However, mixed up with this tolerance for apocalyptic notions in which the world is going to end dramatically is this belief that the world can’t help but get better and better. It’s really hard for me to believe that everything doesn’t improve, because thinking like that was just so much a part of being in California.”

A Forest Takes a Lifetime of Care