Googling “Perfection Salad” brings up an amazing array of gelatin dishes, from those encasing fruit and coconut to “meal in a mold” versions with chicken and peas. The image above has been used hundreds of times on dozens of websites, but at one point its source was credited to Better Homes and Gardens, a magazine established in 1922 and still publishing today.
Food

Regarding Suzanne Guldimann’s article on Gelatin

I noticed she focused on elaborate presentations over the ages and only mentioned the simple gelatin desserts and salads of the 50s and 60s.

Having brought up my family (several of whom now contribute to this paper) during that era, I tried to remember a salad I served with a special name I had forgotten. I went online and found hundreds of old recipes for Jell-O salads. Finally, I came across my favorite called “Perfection Salad.”

Not only was it tasty but it provided a way of getting the kids to eat their veggies. I often put a dollop of mayonnaise on top (father always insisted mayo did not go with Jell-O!)

I’m having a moment of regret as I gave my set of copper molds to one of my granddaughters–but knowing she is such a great creative cook, she may put them to use rather than wall hung decorations.

So here is the recipe I found and I challenge someone (Suzanne?) to give it a try.

We never did respond to our letter writer’s challenge but since we are once again exploring family recipes it seemed appropriate to delve more closely into this claim of a so-called “Perfection Salad.”

It appears that “Perfection Salad” was indeed quite a thing in the early American culinary world and we uncovered its origin. Its history reaches back to 1905 when the owner of Knox (the major gelatin producer in the US at that time) sponsored a contest looking for interesting recipes using his product.

According to chef and author James Beard in his 1972 book, American Cookery this “historic salad, which has become a standard in American cuisine, won third prize in a contest sponsored by Charles Knox in 1905.  Fannie Farmer was one of the judges. The winner, Mrs. John E. Cooke of New Castle, Pennsylvania, was rewarded with a one hundred dollar sewing machine and enduring gastronomic fame.”

Mrs. Cooke’s creation marked the beginning of a boom in the popularity of molded gelatins. Her “Perfection Salad” was first published in 1931 in Knox Gelatin: Dainty Dishes for Dainty People.

Suzanne Guldimann, writing in the original Jell-O history article just about exactly a year ago in Topanga New Times (referred to above), reveals one of the reasons for the popularity of these unusual dishes that emerged due to the widespread availability of home refrigeration:

“Although the weirder gelatin salads fill many twenty-first century foodies with a sense of horror, they were practical because anything encased in gelatin will stay fresh, enabling great Aunt Edna to make her infamous avocado and salmon mold the day before she served it, safe in the knowledge that the avocado wouldn’t oxidize or the fish become fishy.”

We reached out to Linda Best, the owner of the website referred to by our reader but haven’t yet heard from her. In lieu of a response, we’ll give you a hint of the ingredients—lemon Jell-O, pineapple tidbits, chopped cabbage, shredded carrots and sliced celery. She also suggests adding that “dollop of mayo.”

If you are really intrigued and would like to take on the “challenge” please hop over to her website for the full instructions and give it a try.

And please! Let us know how it turned out! 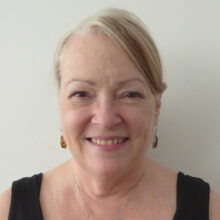 Claire Miller and the Gift of Cacao