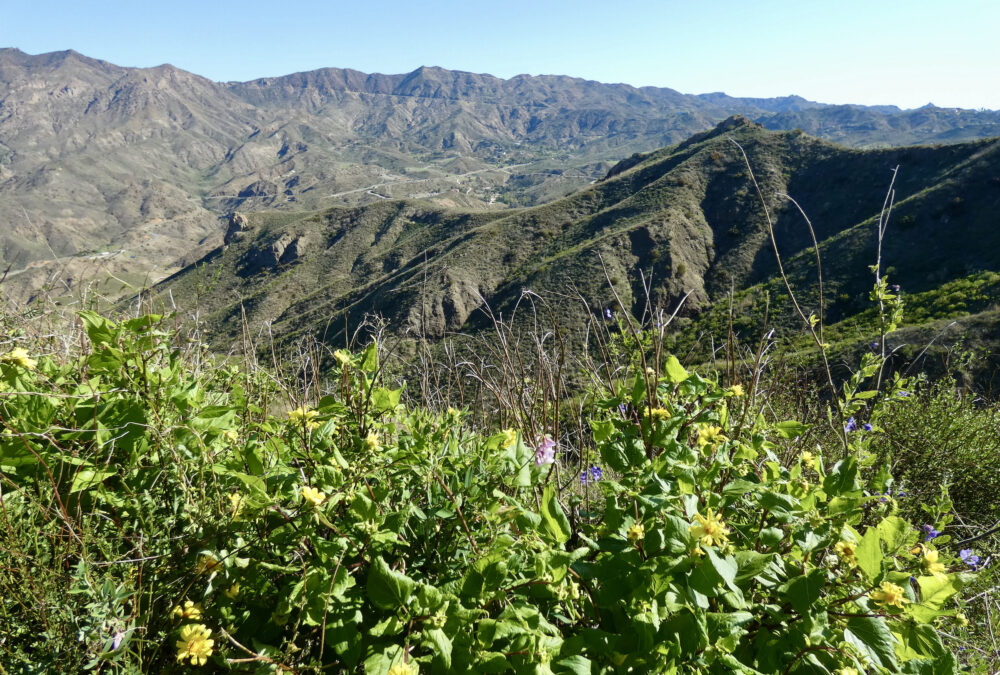 Canyon sunflowers make a brave showing of green and gold despite the drought. This area received nearly six inches of rain, more than any other part of the Santa Monica Mountains, but the spring green is already fading fast. All photos by Suzanne Guldimann
Discover

Topanga has received just 5.54 inches of rain so far this season. The rainfall totals for the rest of the Santa Monica Mountains range from just under six inches at the top of Decker Canyon to a measly 3.61 inches on the coast at Carbon Beach.

This is not a good year for wildflowers. Many are late to bloom this year, and the season will be extremely short, unless April brings an unexpected rain shower, but even during severe drought conditions, the sap rises in spring and at least some flowers bloom.

Plants that can store water and nutrients below ground in roots and bulbs have the best chance of flowering this spring. Deep-rooted green bark ceanothus is currently in bloom throughout the canyon. Wild cucumber, also known as manroot for its huge tuberous roots, can weather drought more readily than most plants, and some natives, like miner’s lettuce, and several of the lupine species, have evolved to grow and bloom quickly, taking advantage of even limited rainfall. That’s a strategy that has enabled invasive mustard to colonize the Santa Monica Mountains, but this year even this aggressive pest plant is suffering from the lack of rain.

Other plants cope with drought by turning miniature—putting all of their energy into perhaps one blossom on a plant that may be only a couple of inches tall, in an effort to produce seed for next year. Some wildflowers never appeared at all this spring. Their seeds will remain in the soil, waiting for more auspicious conditions to germinate.

However, there are places that shelter wildflowers even during a drought year. We recently found chocolate lilies and Padre’s shooting stars blooming on a sheltered north slope of a favorite trail. Rare and ephemeral even in a good year, finding these beautiful flowers in a season when so few flowers are blooming is deeply moving: an affirmation of the power of nature to endure and persevere.